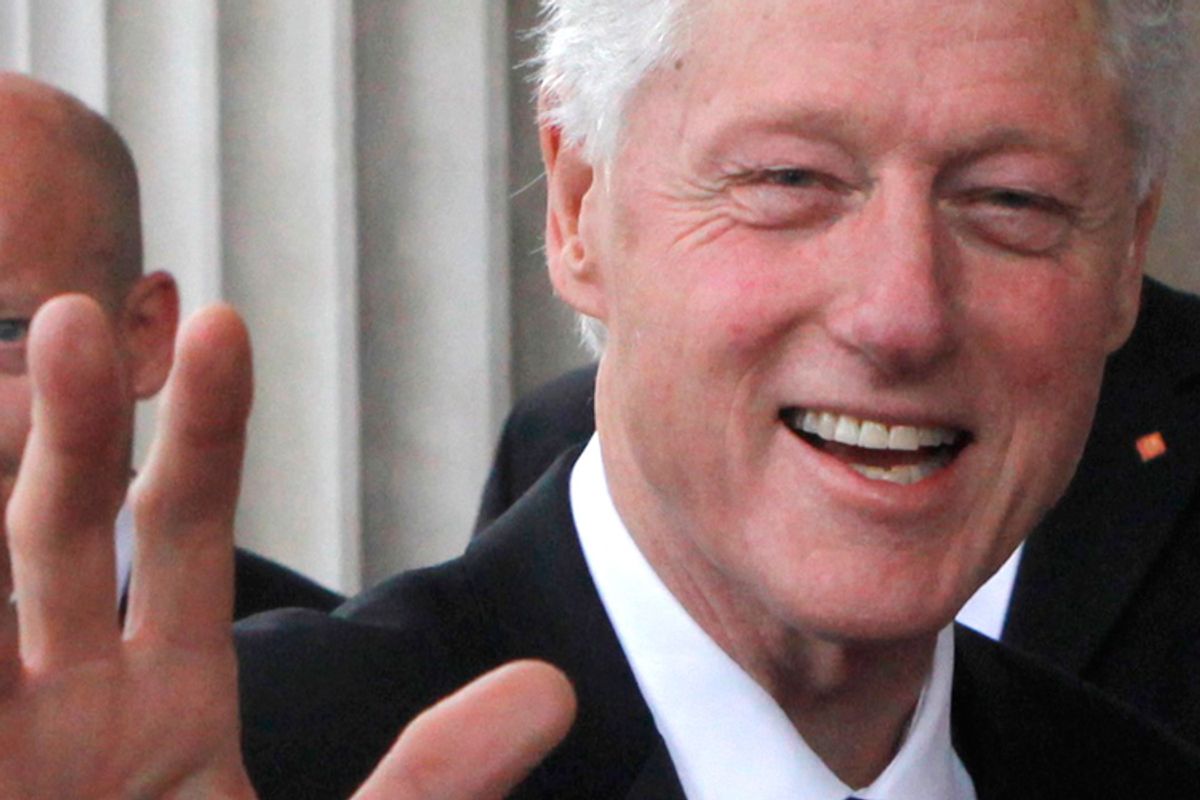 A new poll came out this week and, as you might have already read, Bill Clinton is America's most popular politician.

That's how the findings of the latest NBC News/Wall Street Journal survey are being reported, anyway. In reality, the poll only found that Clinton is more popular than Barack Obama, Mike Huckabee, John Boehner, Mitch McConnell, Mitt Romney, Newt Gingrich, Harry Reid, Sarah Palin and Nancy Pelosi -- the only other politicians who were included in the mix. Still, there's no denying that Clinton's numbers are strong: 55 percent of voters say they have a positive view of him, while only 23 percent see him negatively.

On "Hardball" Tuesday night, Howard Fineman argued that these numbers show that Clinton has supplanted Obama as the leader of the Democratic Party. But that's ridiculous. Clinton's popularity is a result of his not being a day-to-day figure in national politics anymore. Sure, most voters understand that, as Fineman put it, "Bill Clinton oozes politics out of every pore," but because he's not in office, not running for office, and not part of the daily debate in the media, he's largely exempt from the frustration voters are now expressing toward politicians. In this sense, his considerable charm and communication skills -- which were of no use to him when he faced a harsh political climate early in his presidency -- are more valuable than ever.

It also helps that the media is now treating Clinton far less cynically, more like a wise statesman than an ambitious politician. This, too, has everything to do with being away from day-to-day politics. Remember the hit that Clinton's popularity took during the 2008 Democratic primaries, when he was essentially playing the role of candidate? Back then, his words were filtered through a deeply suspicious and confrontational media. But as his recent press blitz, timed to the Clinton Global Initiative's annual gathering in New York, demonstrated, that same media is now happy to afford him an unfiltered platform to expound on current events. To producers and reporters, he's a sought-after celebrity interview subject -- not a politician to be held accountable.

This effect is hardly unprecedented. Gerald Ford, Jimmy Carter and George H.W. Bush all significantly improved their images after leaving office. In fact, at this same point in Bill Clinton's presidency -- the fall of 1994 -- Clinton himself fared poorly against Carter in popularity contests. One poll back then measured Carter's favorable rating at 68 percent -- far higher than Clinton's.

But there's something else going on here, too. It has to do with the way Republicans are treating Clinton now -- and the purpose he serves in terms of their overall political strategy.

It's hard (for some) to remember now, but Republicans once regarded Clinton the way they now regard Obama. The same hysteria that's been ginned up in the last two years was present in 1993 and 1994. This came as a surprise to Clinton, an ideologically flexible leader who had worked cooperatively with Republicans as governor of Arkansas. But none of that mattered when he moved to the White House: He was a Democratic president, and to the GOP's conservative base, Democratic presidents are to be feared and fought every step of the way. So to the GOP base Clinton assumed the role of villain in chief, while Republican politicians dutifully opposed him every step of the way, killing most of his agenda (healthcare, stimulus, crime bill) and leading the media to conclude that the new president was in over his head. "Impeach Clinton" bumper stickers sprouted up long before anyone had heard of Monica Lewinsky.

To the right, Clinton continued to play that role for more than a decade -- through impeachment in 1998, the bogus claims that his staff trashed the White House before handing it off to George W. Bush, and even the campaign to blame him for 9/11. The right's war on Bill Clinton lasted for a good 15 years, well into his post-presidency. But then, rather abruptly, it stopped.

Because he stopped being what Fineman claims he still is: the leader of the Democratic Party. Even after leaving the White House, Clinton had maintained that status thanks to two things: 1) the losses of Al Gore and John Kerry; and 2) the prospect that 2008 would bring a Clinton restoration, with Hillary claiming the Democratic nomination for herself.

All the way until the South Carolina primary at the end of January '08, that restoration seemed inevitable. Almost no one believed Hillary would actually lose the nomination to Obama. That assumption was evident in the right's treatment of the two Democratic front-runners. Go back to 2007 and you'll find that most of the taunts it had directed at Hillary in the '90s were still in fashion on the right, while Obama -- to the extent he was even on their radar -- was portrayed as the good guy. It served their purpose: Hillary was the real enemy, so they were happy to make it seem like she was at the helm of a ruthless machine that was about to mow down a poor, well-meaning underdog. But when it became clear that Obama was actually going to prevail, the roles were flipped; Obama became the dangerous Marxist, while Hillary became a working-class heroine who was being pushed aside by clueless radicals. (I chronicled this about-face for the New York Observer at the time.)

Since then, Bill Clinton (and Hillary) has served a new purpose for the right: the anti-Obama; the Democrat for them to point to and say, "See, now there's a Democratic president we were OK with." He has received treatment from the right the past two years that he was never afforded in the previous 15, and he will continue to receive that treatment as long as he's not the leader of the Democratic Party. This tactical adjustment by the right has not only warmed up some Republicans to Clinton (in that same NBC/WSJ poll, fewer than half of Republicans said they had a negative view of him), it has improved his media coverage. With Republicans no longer pushing stories that play on the idea of Clinton as a dishonest schemer, there's much less negative noise to distract Americans who aren't part of the GOP base; they are much freer now to be charmed by Clinton.

But rest assured, if 2014 rolls around and Hillary starts making noise about running for president again, the Clintons will again be villains to the right -- and we won't be talking about Bill as the most popular politician in the country.