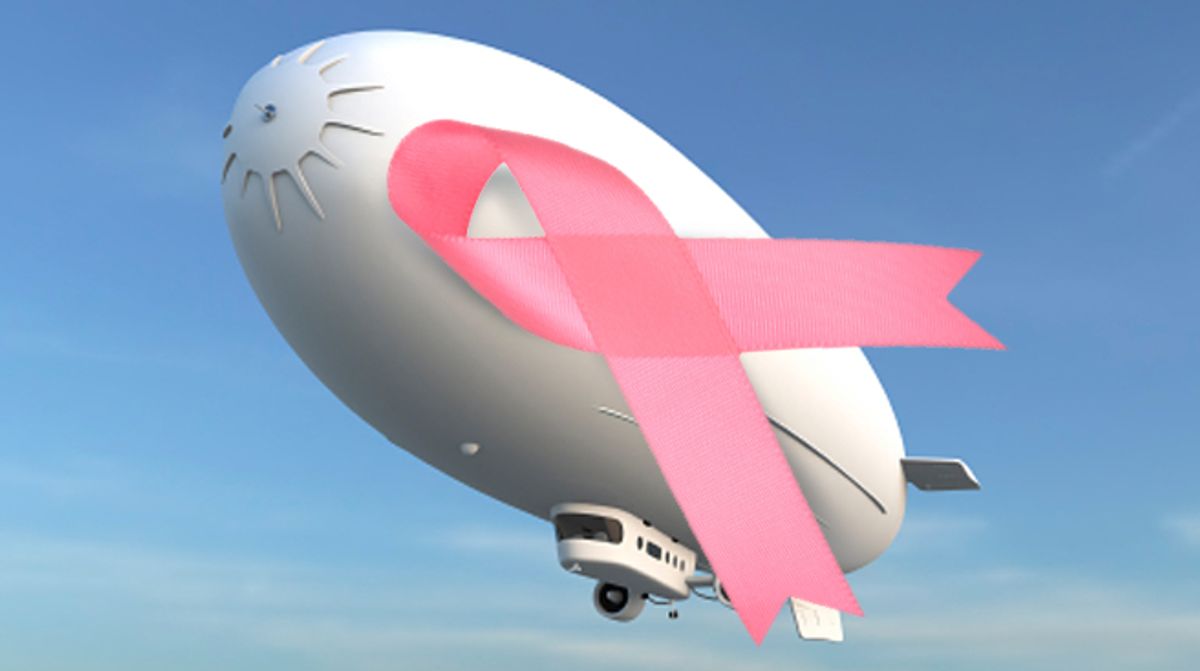 It's October again. There's a brisk nip in the air, leaves are starting to tumble from the trees, and half of all your usual consumer goods are now cotton candy colored. Welcome to another breast cancer awareness month.

For over 25 years now, thanks to the efforts of organizations like the Susan G. Komen Foundation  and the Avon Foundation for Women, one of the most pervasive -- and deadliest -- diseases to strike women has become an important topic for research, detection and public awareness. No doubt all that advocacy has played a part in the sharp decline in breast cancer rates over the past decade, an encouraging sign for all of us who possess breasts -- and for our daughters. But as breast cancer awareness becomes an increasingly pervasive branding opportunity, perhaps it's time to consider what the glut of pink says about our attitudes about the meritocracy of disease, and the ways in which we dispense compassion.

That breast cancer is a serious health issue -- one that shows a keen favoritism for my own demographic -- is undeniable. In the past two years alone, four women in my not very large social circle have been diagnosed, one of whom died the day after her daughter finished kindergarten. So I know, in a painfully firsthand way, the dominant image of breast cancer. It's moms. Moms who generally haven't done much more to attract the disease than be female and draw a genetic short straw. It's hard to argue with the injustice of that.

Yet plenty of other deadly diseases get considerably less attention. The leading non-accident-related cause of death in America is heart disease, frequently a diet and lifestyle-related problem that only recently has gained traction as its own important cause. And how? By taking a cue from breast cancer and dressing it up as a women's issue with a fashionable color. It bears noting that the prevailing icon of heart disease isn't that of an obese male; it's a slim red dress. And as you're sipping your blush-tinted Sutter Home Wine for Hope, remember that the American Cancer Society estimates that this year lung cancer will kill triple the number of Americans that breast cancer does. The combined cancers of the genitals, including ovarian, cervical and prostate cancer, will kill about 20,000 more individuals than breast cancer. The CDC meanwhile estimates that over 1 million Americans are HIV positive, and that one in five is unaware of the infection. And alcoholism, addiction and depression will this year continue to kill not just via the overt channels of overdose and suicide, but in their brutal toll on overall health.

When we talk about disease, our capacity for goodwill seems to diminish in direct correlation to the question of personal accountability for it. It's only natural that the news of a diagnosis is often greeted with a desire to know its cause. Christopher Hitchens' revelation of his esophageal cancer spurs a litany of his hard partying exploits. Michael Douglas' throat cancer? "Largely due to drinking and smoking." We want to know how things happen so we can avoid having them happen to us. But we also, in the process, run the risk of ennobling those with certain sicknesses while stigmatizing others. For evidence, look no further than the latest episode of "Project Runway," and Mondo's admission that he has been silently living with HIV for 10 years. A decade is a very long time to live with any health-related condition, and it is unacceptably too long to live with shame.

I've had two surgical procedures because I was at risk for cervical cancer, a disease that usually manifests in the presence of the sexually transmitted HPV virus. An estimated 80 percent of sexually active women will at one time or another contract HPV. But  you won't find a lot of STD-themed ribbons at the Target. And since being diagnosed with malignant melanoma, the questions I've heard most often have been, "Were you a sunbather?" and "Did you do a lot of tanning?" Well, no, but would you have cancer-blamed me if I had?

We all make choices that affect our health and our long-term quality of life prospects, and some of us certainly choose to poke sticks at the Grim Reaper more aggressively than others. But few of us make consistently perfect choices, and no one deserves disease. It's certainly pleasanter to buy a pink bucket of KFC and congratulate oneself for "promoting awareness" than it is to march for cirrhosis, hepatitis and gonorrhea, but what if we had even a measure of the same generous, unconditional support we give this month to women with breast cancer for those living with less morally unambiguous conditions? What if October wasn't just pink? Imagine how much suffering we could eliminate. Imagine how much we could cure.