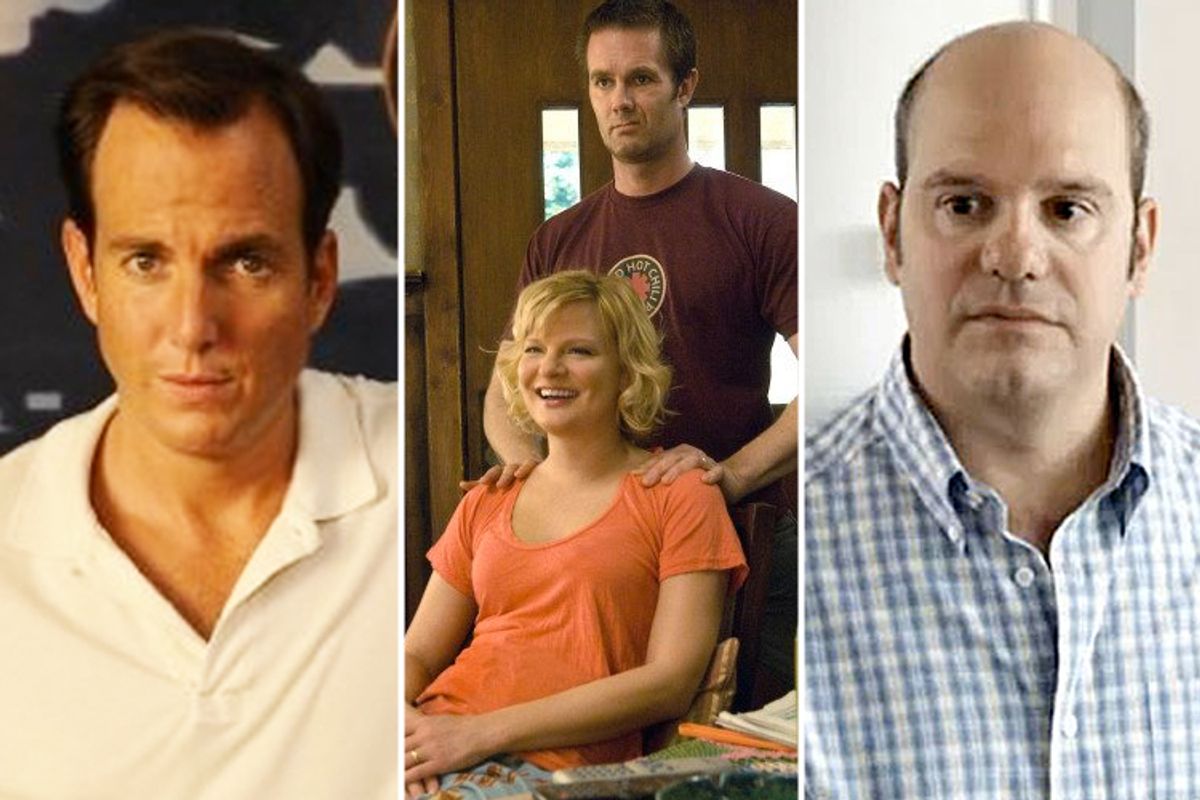 Will Arnett in "Running Wilde," Martha Plimpton and Garrett Dillahunt in "Raising Hope," and David Cross in "The Increasingly Poor Decisions of Todd Margaret"
--

Let's just admit that we're spoiled right now and get it over with. When the smallest ripple throws off our experience -- the dryer breaks down, the sink backs up, the transmission locks up, the baby gets croup -- we lament the enormous inconvenience of it with the same grim tones of Air Force officers warning of aliens who seem to have a special interest in nuclear weaponry.

We're so far removed from life without six-cylinder engines and five-speed chiming large-capacity appliances that our schedules unravel at the slightest failure of technology. "Then I had to actually call the repairman and wait for him to show up!" we whine to our spouses and friends in paroxysms of learned helplessness, surrounded by machinery we can't service ourselves.

No wonder the aliens lost interest in us back in the late '60s. Like dimwitted teenagers with bad impulse control, we're a little too pathetic to bother monitoring us very closely. I'm sure the lizard demons of Zambular in the Galaxy of Termitrax are up to far worse.

We're certainly pretty spoiled when it comes to TV comedies. Here we have "30 Rock," "The Office," "Bored to Death," "Parks and Recreation," "Modern Family," a veritable cornucopia of comedic treasures, and what do we want? More, more, more. More funny, more laughs, more rolling on the floor gasping for air. Remember the olden days, when there were only three good comedies on TV? The rest featured lazy but lovable suburban fathers surrounded by machinery they couldn't service themselves -- see also: soothing tales of learned helplessness to make the ineffectual masses feel less soft and worthless.

But we always want more, don't we? We're fixated on novelty, we've got to know what else might make us laugh. Do we crave comedy as a means of escaping how squishy and alienated and overwhelmed we've become? More laughter, more forgetting!

First, it's time to state the obvious: Most new sitcoms are awful. Trying to discern which have a fighting chance of not sucking requires turning the processor in your head down a notch and suspending your disbelief as much as possible.

Once these adjustments are made, Fox's "Raising Hope" (9 p.m. Tuesdays) can seem downright plucky and charming. Sure, this comedy about a clueless kid named Jimmy and his tacky, wacky family trying to raise a baby (Dad had a one-night stand with Mom, who was a serial killer and died in the electric chair) goes to all of the white-trash clichés immediately: Great grandma is senile and tries to breast-feed the baby, the ladies of the house smoke, Mom puts "day old" stickers on stuff at the grocery store to get a discount. We can predict that in the next episode, everyone will be eating Ho Hos for breakfast and carrying the baby through town in a wheelbarrow.

But Martha Plimpton and Garret Dillahunt as the dumb dad's parents really make this one impossible to ignore completely. And even though we've already got "Oh no the ugly chick likes me" jokes and "You're right, the baby's limbs could get amputated this way" jokes and other material that might make you smile but never laugh, there's also a slightly disturbed tone here that's hard to match on sitcoms about yuppies having bad hair days.

Take this exchange between Virginia (Plimpton) and her son Jimmy (Lucas Neff):

Jimmy: Well, I can't just let her cry. I'm pretty sure she already hates me. She never smiles.

Burt: Yeah, I noticed that. I was making funny faces at her last night for like an hour. And nothing!

In another scene, Virginia explains why the secondhand smoke from her cigarettes won't hurt the baby for years. "Jimmy, smoke rises. She's not gonna be tall enough to breathe it for a long time."

Next up: ABC's "Better With You" (8:30 p.m. Wednesdays), a sitcom about yuppies having bad hair days. This is the kind of show that you can imagine your sorority sisters from college (and their boyfriends) watching, since it's all about cute girls with super-glossy flat-ironed hair who are, like, so in love with their boyfriends/husbands but, like, why are guys so dumb about stuff anyways? When, in last week's episode, Mia (Joanna Garcia) says to her peppy sister Maddie (Jennifer Finnegan), "What is it with boys and fire stations?" it sent a cold shiver down my spine, a terrible flashback to a time spent among young women who found it strangely comforting to depict themselves and the opposite sex as mere children.

I feel that I should stand up for this wobbly little comedy, though, because, when you peel back the repetitive coupling shtick ("Oh, that really is how couples act when they've been together for years! Teehee!"), you've still got writing that's smart enough to show some promise as well as a very talented cast. Finnegan and Garcia are convincing and likable, actually, as sisters trying to manage their idiot "boys," and Josh Cooke (Ben) and Jake Lacy (Casey) are both charismatic and funny as their respective idiots. Debra Jo Rupp, so memorable as the mom on "That '70s Show," is fantastic as mom Vicky here.

Yes, there's a lot of chatter about how to manipulate the boys that's less than compelling, but the scene where Ben invites Casey to a wrestling match ("hug fighting" Casey demeaningly calls it) by dropping to his hands and knees in the opposite direction yelping, "Let's do this!" made me laugh out loud. Josh Cooke steals most of his scenes, actually -- watch him and you'll see -- and somehow I can't help thinking that this show could be a serious guilty pleasure, once the writers are given a few months to hit their stride.

Likewise, Fox's "Running Wilde" (9:30 p.m. Tuesdays) may take a while to start firing on all pistons, but there's so much potential there that it's tough to turn your eyes away. Naturally any show created by "Arrested Development's" Mitch Hurwitz and starring Will Arnett, David Cross and Keri Russell is going to get tons of attention, but this comedy has stumbled a little out of the block. Russell isn't the surest bet as a comedic actress, and her scenes tend to be a little confusing: "Are we actually supposed to care about this person? Is this a drama? Why is she talking to him?" are the natural questions that arise from interactions between an over-the-top farcical presence like Arnett and a very earnest type like Russell.

On the other hand, as formulaic a formula as the rich-bastard-falls-for-plucky-environmentalist might be, you can't really argue with dialogue like this (which really does need to slow down a notch for the old folks like me to appreciate it):

Emmy: I don't believe that one person is worth the energy it takes to heat 80 gallons of water for a bath.

Emmy: I was talking about personal worth.

Steve: Yes, and I'm saying that I have far more personal worth than you do, but I'm not judging you for it.

Emmy: Steve, I am judging you.

Since we're all judging each other these days for having too much money or being too lazy -- or for being too judgmental about the rich and the lazy -- these scenes unearth something very essential about the sickness and sadness of life in America these days. And no one gets to the heart of disturbed, pampered people quite like Hurwitz.

Emmy: I couldn't figure out how to use your dishwasher.

Steve: Who, Oleg? Oh, just push the dish into his chest, he'll take it from there.

Ultimately, we could grow to like these freaks, and the big effort here (that feels a little awkward now) is clearly to make Emmy and Steve into sympathetic characters. You know, more sympathetic than, say, Gob or Lucille Bluth. When Steve's assistant Migo laments how little Steve's parents cared for him, Steve replies, "No, they care about me. They just choose not to show it with words or actions."

"Running Wilde" will obviously be a little bit of a disappointment to those who miss "Arrested Development" (and who doesn't?), but this is exactly the sort of show that is tweaked enough and smart enough to improve vastly over the coming months. Remember, even "Arrested Development" didn't completely make sense until about halfway into its first season.

Of course, if you really want to see Will Arnett and David Cross in fine form, you'll tune in for IFC's "The Increasingly Poor Decisions of Todd Margaret" (10 p.m. Fridays), which boasts the best pilot episode of the fall season, hands down. (Seriously, look for it on Hulu or catch a repeat performance of the first episode on IFC; I think I've watched Will Arnett's hilarious opening scene five times now, and it's funnier every time I see it.)

David Cross plays Todd Margaret, an ineffectual dim bulb who foolishly gets promoted (by over-the-top corporate nightmare boss played by Arnett) to sell energy drinks in the U.K. Margaret can't do anything right, and each episode escalates from bad to worse as he, well, makes one increasingly bad decision after another. Along the way he's plagued by a somewhat demonic, far smarter underling (Blake Harrison) and a love interest (Sharon Horgan) with an enthusiasm for molecular gastronomy who raves to Todd about "Helium-fused chicken balloons," then makes him a meal that includes "pancetta-scented air" ("Ham farts?" he asks).

All of which lands "Todd Margaret" somewhere between "The Office" and "The Jerk," which is a fine hybrid indeed. Although every second of this comedy is far from genius, the disturbed mood and unique mean-spirited flavor of it all points to what the network comedies are so often lacking: bold choices that border on the absurd. As a development executive might put it, this is what people like these days, and this is what's working on "Modern Family" and "Parks and Recreation" and "30 Rock." The sooner the networks can grasp that, the sooner everyone will spend less time flat-ironing hair and more time inventing something half-mad that we'll savor more than pancetta-scented air. And with any luck, we'll squeeze in a few more laughs before the lizard demons of Zambular descend and harvest our gizzards for their protein shakes.