Good grief! "Peanuts" and the death of comics

Charlie Brown turns 60 today, but it's a gloomy reminder that no strip will ever be as beloved, or as important 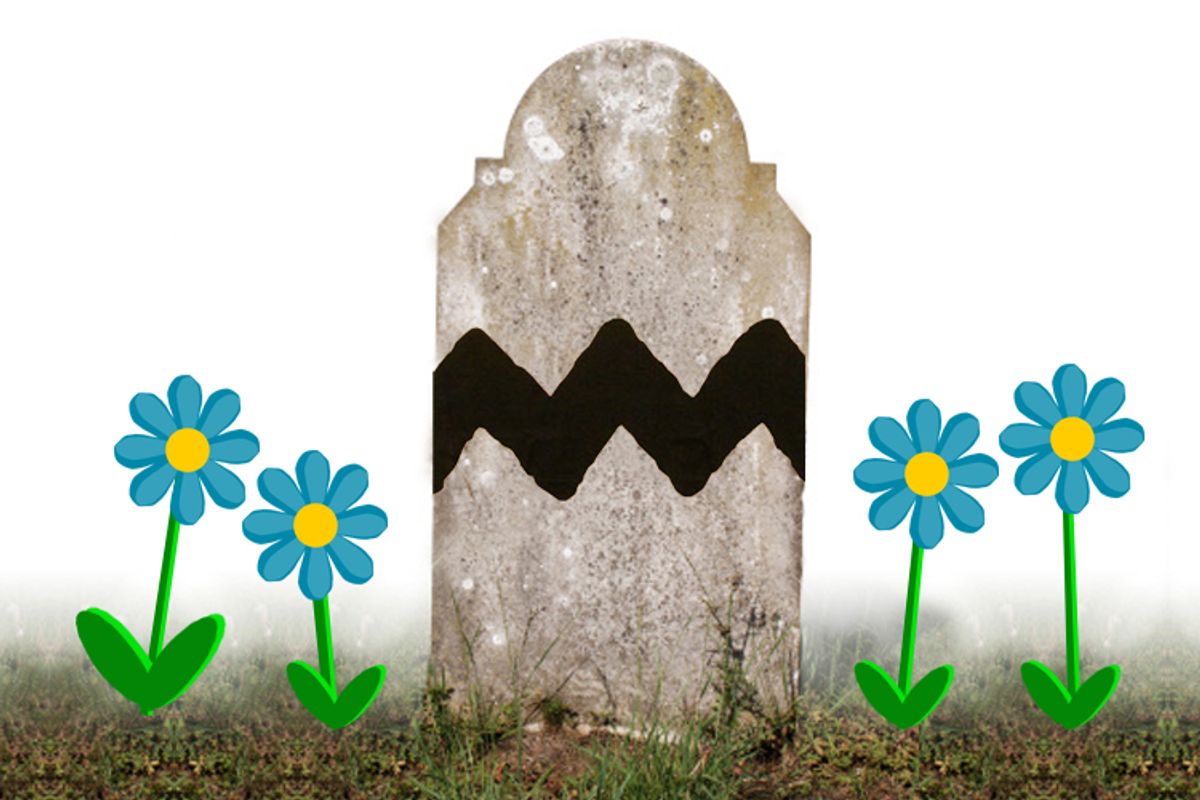 From the international headquarters of Things Ain't What They Used to Be, a bulletin: This weekend marks the 60th anniversary of "Peanuts," which debuted Oct. 2, 1950. After honoring the date by revisiting Fantagraphic Books' handsomely designed anthologies of Charles Schulz's strips -- highly recommended to any "Peanuts" fan -- I want to pose a couple of questions here.

First, is there any recent-vintage daily comic strip being published regularly in North America that's as widely recognized, never mind beloved, as "Peanuts"?

And second, is such a scenario even possible?

I'm pretty sure the answer to both questions is "no." But I'm throwing them out anyhow in hopes that someone will persuade me otherwise. I love the comic strip form, but I feel fairly certain it's either dead or doomed -- because even if there were somebody out there doing early Schulz-quality work, who would know about it? I mean, besides die-hards who consciously go spelunking for good new strips online and spread the word when they find something? Seriously, does anyone even do that? The world has changed to the point where that's less possible, maybe impossible.

It all comes back to the daily newspaper and the strips they carried. The daily strip was a gateway into appreciating all sorts of comics simply because it was right there on your doorstep or in your local news box. And the comics were one of the reasons you read the paper.

"The Far Side," "Herman," "Bloom County," "Doonesbury" and "Calvin and Hobbes" were probably the pantheon strips during the years that I read newspaper comics pages regularly (roughly the '70s through about 2000) because those were the years I read newspapers on paper. (I continued to read "Peanuts" during that period -- though admittedly more out of nostalgia than because Schulz was doing great, or even good, work. By that point, the strip had become pretty gimmicky and thin, more often focusing on Snoopy's fantasy life and sitcom-style farce than on the psychological dynamics of the little round-headed kid and his pals. But as my tombstone will one day read: I digress.) The daily strip is (or was) inextricably associated with daily newspapers. And as the daily newspaper ebbs in prominence, the daily strip must ebb, too. Or maybe I should say "has." Past tense.

If so, too bad. One of the beautiful things about the daily newspaper -- something the self-reinforcing ego chamber of the Internet can't provide -- is the ingrained certainty of discovery. The daily paper was an omnibus format, a potluck. Even if you picked up a paper for something you already knew you wanted -- the sports section, the crossword, Dear Abby or the latest dispatch from an Op-Ed columnist you absolutely despised but couldn't stop reading -- the physical act of separating the sections and leafing through the pages meant that you might stumble onto something you weren't looking for, perhaps even something interesting, well-done and, in general, worth knowing about.

That same dynamic applied in microcosm to the comic page. Maybe you went there to read "Peanuts," "The Far Side," "For Better or for Worse," "Dilbert" or "Apartment 3G" (I just threw that in there for the hell of it, by the way; I feel relatively certain that nobody in the history of human civilization ever actually read "Apartment 3G"), and you just happened to glance upon a strip that was either brand-new or that had previously escaped your notice -- and voilà, you were hooked, and so you added another title to the daily list of must-reads.

That's how I first discovered Bill Watterson's sublime "Calvin and Hobbes" sometime into its first year of publication; my paper used to bury it at the bottom left-hand side of a two-page spread of comics, bumped right up against the vertical fold. Then one day it moved up a couple of rows so that it was directly beneath one of my favorites, Jim Unger's "Herman," at which point I noticed it and became a fan. As I continued to read "C&H" over the next few years, I watched it climb to the very top, above "Herman," until it sat right next to "Peanuts" -- a vicarious pleasure that ranks with watching a talented franchise expansion team make its way to the playoffs faster than you expected, or a single by a talented new band skyrocket to the top of the charts.

It's important to note that what we're seeing now -- the daily strip becoming a nostalgic art form rather than something central to popular culture -- isn't some out-of-nowhere coup de grâce. It's the final phase of a de-evolution that's been going on for a century. Comics were once much bigger that they are now, much bigger -- and I don't just mean in a figurative sense. The comic page used to be where publishers flaunted their ability to print in color, and flaunt they did. In the early years of the form, the more visually daring, draftsmanship-driven strips were spread out over a half-page on Sundays, even a full page, and the best were as aesthetically ambitious as any modern graphic novel: "Krazy Kat," "Prince Valiant," "Little Nemo." Thanks to newsprint shortages in World War II, papers started offering less acreage for cartoonists to play in. The shrinkage continued over the next few decades, to the point where daily strips were busted down to near business-card size, a visual correlative to their diminished presence. (Supposedly this is one reason -- but by no means the only reason -- why Bill Watterson got out of the business. "Calvin and Hobbes" was an aggressively visual strip, a haven of detail for detail's sake, and as the strips shrank, he had neither the opportunity nor the motive to strut his stuff.)

The last time we saw daily strips being regular conversation pieces was the '90s -- maybe the early '00s, tops. (I'm thinking specifically of "Dilbert" and "The Boondocks," and to a lesser extent "Mallard Fillmore" and the continually evolving and seemingly indestructible "Doonesbury.") Not coincidentally, that's the period when Internet access turned into a utility, the virtual world started to eclipse the "real" world, and all sorts of pop culture delivery devices (the daily newspaper, the magazine, the CD, the ink-on-paper book) endured identity crises or crippling, often irreparable financial blows (often both). The world simply didn't need or want daily newspapers anymore. The spreading lack of interest was nothing personal. Changes in technology and lifestyle meant that newspapers had stopped making sense, in much the same way that the nightly half-hour network newscast stopped making sense. Thus their fates were sealed -- along with the fates of genres and formats that were all bound up in the daily newspaper experience.

Granted, every strip I've mentioned in this piece is available online, either at a dedicated website or as a piece of syndicated content. For instance, Tom Tomorrow's "This Modern World," once an alternative press mainstay, is a regular Salon feature, and "Doonesbury" has partnered up with Slate. And yes, new comic artists have thrived in the post-newspaper world -- but they've done it by thinking of their strips not as self-contained creations but as components of a digital-age brand. One conspicuous example is animator Simon Tofield's Simon's Cat, one of many modern strips to position itself as a brand that just happens to include comic strips. (Tofield regularly produces YouTube shorts that drive traffic to his website, where he hawks printed anthologies of old-fashioned black-and-white strips, plus T-shirts and other merchandise.)

Such strips exist apart from the venue that once served as a reliable launching pad. They're little islands of personal expression in a sea of data. That's no small accomplishment -- but perhaps not enough to counteract a certain sadness over the realization that Atlantis isn't coming back.