The state employee -- an adult -- is obsessed with, and harassing, a gay college student 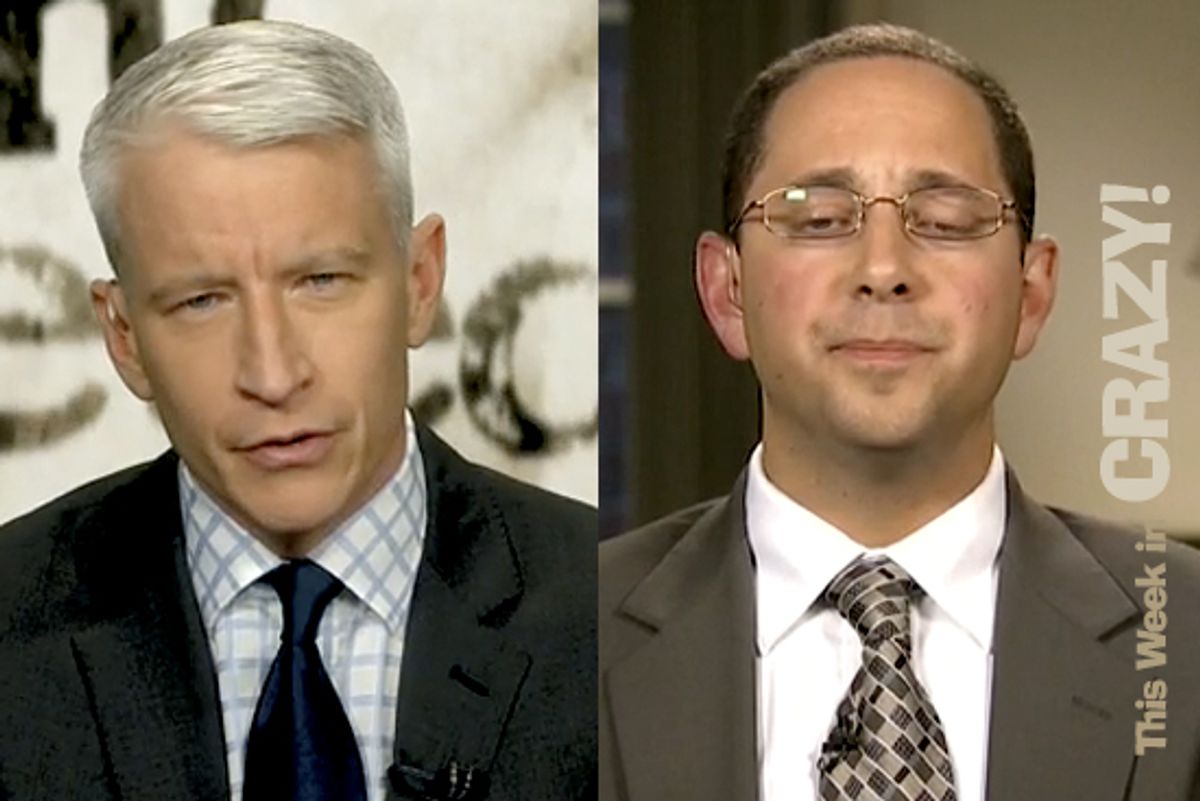 In a week featuring conservative activist James O'Keefe attempting a bizarre sexual harassment "prank" of reporter Abbie Boudreau and Rick Sanchez's career-ending anti-Semitic rant about Jon Stewart's bigotry against him, there was no shortage of bad craziness. But one man dwarfed the competition: Michigan Assistant Attorney General Andrew Shirvell.

Shirvell's crusade against a gay college student went national this week when Shirvell inadvisedly decided to appear on Anderson Cooper's CNN show to explain himself. In case you missed the amazing video of Cooper interviewing this odd character, here are all 10 excruciating minutes:

Shirvell's target is Chris Armstrong, the first openly gay student body president of Shirvell's alma mater, the University of Michigan. Armstrong ran on a platform of expanded dining hall hours and coed student housing. So, of course, Shirvell -- an adult, with an important and serious job working for the state of Michigan -- started a blog dedicated to proving that this college student is a racist, elitist, Nazi-like recruiter for the cult of homosexuality, and "Satan's representative on the Student Assembly." Shirvell also puts "gay" in scare quotes, for some reason.

Shirvell obsesses over Armstrong and his friends, reposting content from the Facebook pages of distant relations, camping out outside Armstrong's house with a video camera and "protesting" outside gay bars.

His blog -- "Chris Armstrong Watch" -- is a breathless, sensationalistic catalog of Shirvell's every waking thought about the horribleness of this accomplished and successful young gay man. Sadly, he password-protected the site on Friday. But it's still cached. Some gems from the archives (emphasis his):

As the 2010-2011 academic year at the University of Michigan quickly approaches, new evidence suggests that the student government will be extremely hostile to Christian students under the leadership of Chris Armstrong, the first openly "gay" president of the Michigan Student Assembly (MSA) and a fanatical proponent of special rights for homosexuals.

In the past, Armstrong, who has been caught-up in several recently-revealed "gay" sex scandals, has aired his strong disdain for Christians who advocate a Biblical view of homosexuality.

Now, Chris Armstrong Watch has uncovered several "smoking-guns" that suggest that Armstrong and his cronies on MSA are out-right anti-Christian bigots who openly mock God, the Bible, and the sanctity of unborn human life.

From the night Shirvell followed Armstrong's friends to a gay bar, to "protest":

Friday nights are so-called "Pride Nights" at Necto, which mean that the attendees are primarily homosexuals. I decided to peacefully exercise my First Amendment rights by witnessing to the attendees as they lined-up to gain entry to Necto throughout the very warm evening. The Ann Arbor police gave me the go-ahead and had no problem with me holding my sign, which is pictured above - only hours before it was ultimately destroyed by an out-of-control crowd of Armstrong supporters.

For over three hours, I successfully witnessed to many homosexuals and their "allies," many of whom did not know that Chris Armstrong had joined a racist student organization (Order of Angell) after lying to minority students' faces by telling them during his MSA presidential campaign that he would never join such an offensive group. However, I also encountered several Armstrong supporters, such as lesbian activists Mical DeGraaf and Maureen Kelly as well as Tommy Habratowski (Tommy H. had participated in Armstrong's October 2009 "gay" orgy party, see: http://tiny.cc/vg1ya). It was clear that they were far from pleased that I was there exercising my First Amendment rights.

Armstrong was not in Ann Arbor that night, as he was still in Washington, D.C., "interning" with the office of U.S. Speaker of the House of Representatives Nancy Pelosi. In fact, that night Armstrong was reportedly at a concert featuring the notorious anti-Catholic bigot, "Lady Gaga." Nonetheless, it appeared to me that several of Armstrong's supporters may have been in direct communication with Armstrong via their "smart phones."

That is scare quoting at its finest. And least explicable.

Shirvell is currently prohibited from setting foot on the University of Michigan campus, and Armstrong is seeking a restraining order against him. On Friday Shirvell decided to take a "personal leave," after which he will face a disciplinary hearing. Let's hope he uses the time off to think, long and hard, about why, exactly, he's so obsessed with young Chris Armstrong.

Cnn Lgbt This Week In Crazy