"At Home": The weird history of the houses we live in 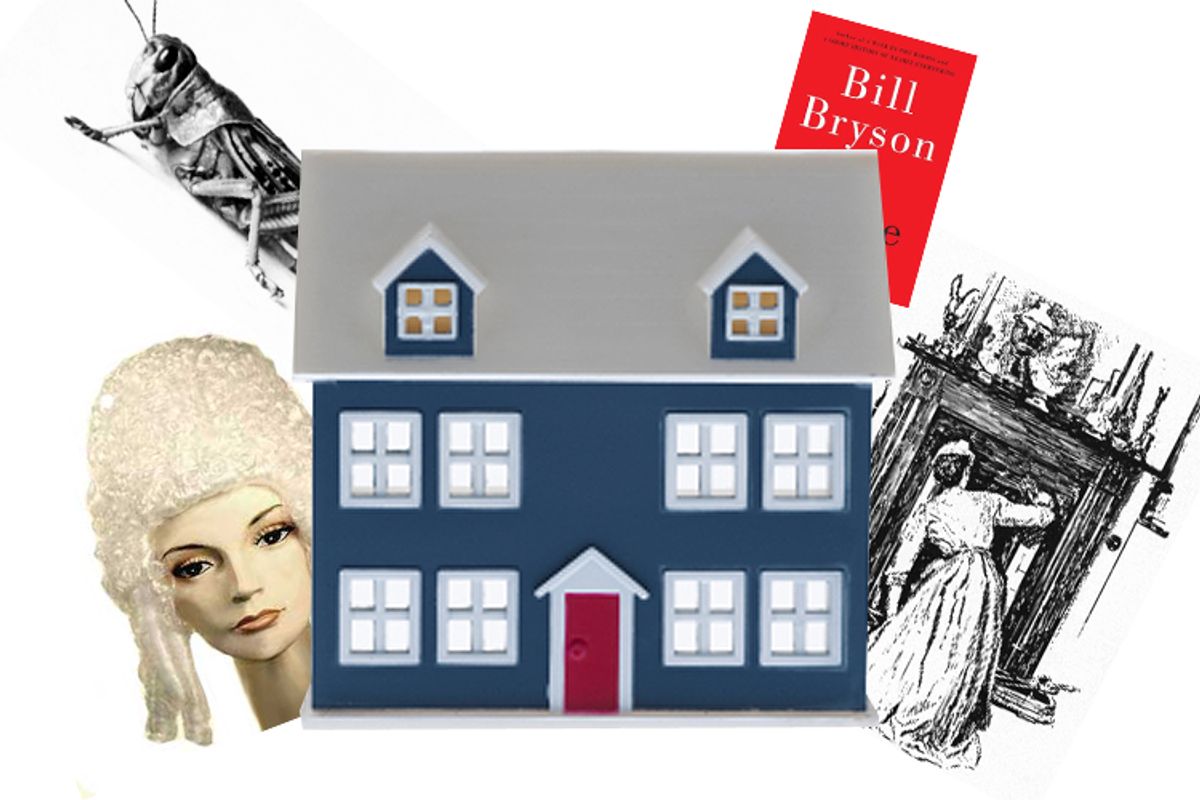 Until now, I've held out against Bill Bryson's very popular books, under the impression that they're little more than thematic collections of "fun facts" loosely held together by no particular thesis or argument and containing nothing very new. This impression was entirely correct, but what I had not figured -- I now realize, after turning the final page of Bryson's latest, "At Home: A Short History of Private Life" -- is how entertaining such a grab bag of anecdotes and curiosities can be.

It must be said that "At Home" is not, properly speaking, either short or a history, if by "history" you mean something relatively coherent and chronological. The organizing principle is the Victorian house, built in 1851, where Bryson lives with his family in an English village. The chapters proceed room by room, with the one titled "The Dining Room" expounding on the typical diets of 18th and 19th century Anglophones (the focus is primarily on Americans and Britons), "The Bathroom" touching on the emergence of modern plumbing, "The Dressing Room" offering tidbits on the bizarre, unwholesome and often dangerous fashions of past generations, and so on. It's sort of a history of the private home -- and sorta not.

Histories of everyday life are fascinating but frustrating, given that for centuries scholars regarded such matters as beneath their notice. Bryson reports that the cruet stands placed on dining room tables at the time his house was built traditionally held two bottles (for oil and vinegar) and three casters (or shakers), for salt, pepper and -- no one knows what. Whatever condiment or seasoning that third caster typically held is not conclusively recorded anywhere, despite the hundreds of thousands of families who sat around it three times a day (during the first great flowering of the novel of manners, I might add). A more understandable mystery surrounds the two lumps of birch fungus found on the frozen, 5,000-year-old corpse discovered in a German glacier. Threaded on sinew, the lumps were "obviously treasured," Bryson writes, "yet birch fungus is not known to be good for anything."

All of this stands as a reminder that much of what we know about people's lives in the distant past is based on the supposition of archaeologists and anthropologists who are eminently fallible. In their 2007 book, "The Invisible Sex: Uncovering the True Roles of Women in Prehistory," authors J.M. Adovasio, Olga Soffer and Jake Page argue that scholars have overemphasized the importance of stone and metal tools and weapons simple because these are seen as typically used by men and happen to be made from materials that last for thousands of years. Textiles and other fiber-based artifacts associated with women, however -- we're talking about nets, rope and string -- were probably just as crucial to survival, but any evidence of them perished long ago.

"The Invisible Sex" isn't one of the sources Bryson uses, which is perhaps a little surprising, given this book's whopping 500-plus-title bibliography. Bryson's method is to cherry-pick the choicest morsels from piles of academic and popular volumes, with particular focus here on those "cultural histories" about one particular technology, practice or substance and how it allegedly saved or changed the world. Even before Bryson cited the books themselves I spotted the semi-digested contents of such works as "The Dirt on Clean" by Katherine Ashenberg (on bathing) and Roger A. Ekirch's magnificent "At Day's Close: A History of Nighttime" (about the evolution of artificial lighting). You need never plow through "Uplift: The Bra in America" or "The Grass Is Greener: Our Love Affair With the Lawn" looking for chitchat fodder; Bryson does it for you.

Not that all of this stuff would serve well as the conversational equivalent of cocktail peanuts. Expect people's eyes to glaze over when you inform them that what Americans call "clapboards" are known as "weatherboards" in the U.K., and nobody can explain why. However, most of the time Bryson has an excellent nose for the piquantly odd fact -- especially for disgusting details, like the vermin that inhabited the tall, powdered wigs of 18th century French aristocrats or the fact that until the Victorian era, having sex and even voiding one's bowels were not considered especially private activities. (Mount Vernon has a privy with two seats, side by side.) I know that the next time I feel overwhelmed by housekeeping, I'll remind myself that once upon a time everyone had to boil up their own shoe polish at home, a very messy endeavor, but not, at least, as toxic as making up your face in the 1500s, painting your walls green in the 1700s or treating your sheets for lice in the 1800s.

Whenever he recounts the introduction of an important innovation in the domestic realm, Bryson provides a brief history of the person responsible, how likable he was according to his family and associates and, rather endearingly, whether he made any money off of his inventions. Thomas Chippendale went bust making furniture, and Eli Whitney's cotton gin changed the world's economy without much enriching the guy who devised it. On the other hand, Thomas Watson, Alexander Graham Bell's assistant, got a 10 percent stake in the phone company, giving him the leisure to take a degree in geology, convert to Islam and go on the stage. (He was good!)

As I zipped through pages of this stuff, I did find myself occasionally inclined to grouse: Why the long introductory section on the Crystal Place, a giant glass greenhouse built for the Great Exhibition of London, when it has next to nothing to do with "private life"? I understand why the chapter titled "The Study" dwells exclusively on the creatures that live in houses with us -- Bryson's own study is plagued with mice -- but why does it conclude with a couple of pages on the locust swarms that devastated the American West between 1873 and 1877? (Also, there's nothing about roaches, fleas, houseflies, termites, silverfish or ants, insects that, unlike locusts, actually live in houses.)

OK, to be honest, if I'd read somewhere that the first of those massive locust swarms took a full five days to pass, I'd want to share that apocalyptic image with my readers, too. (No wonder American pioneers maintained such an Old Testament frame of mind.) Like Bryson, I would feel tempted to squeeze it in one way or another, however irrelevant it might be. Much of "At Home" is like this: interesting, but only tangentially related to the larger subject. The rest are mostly curios. You won't find much about cooking or the movement of work out of the middle-class home or changing customs in entertaining, for example, but you will learn that the first electrical sockets were on the ceiling and you had to climb up on a footstool to plug anything in. All of which is to say that "At Home" may ultimately be a bit pointless, but damn if it isn't a lot of fun all the same.

Books Nonfiction Our Picks What To Read