Ed Schultz, you're no Glenn Beck 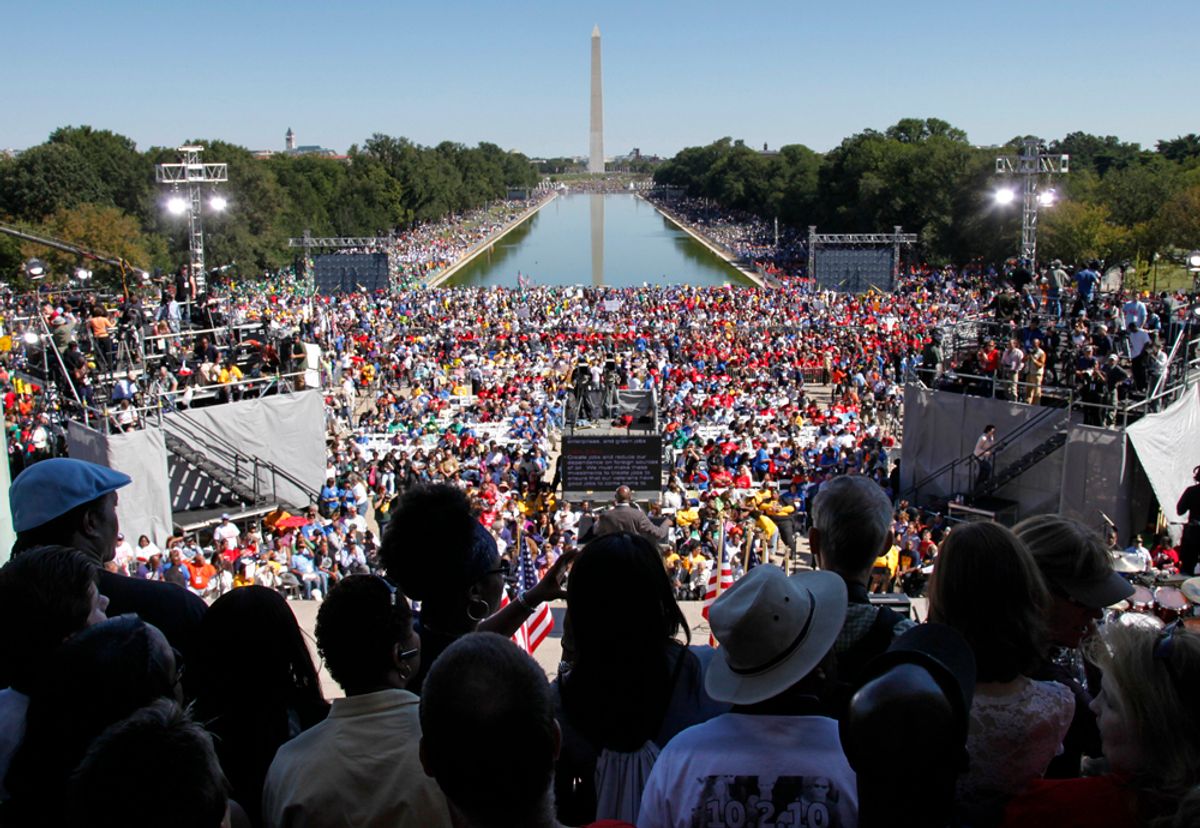 Activists gather at the Lincoln Memorial in the nation's capital to participate in the "One Nation Working Together" rally to promote job creation, diversity and tolerance, Saturday, Oct. 2, 2010, in Washington. (AP Photo/J. Scott Applewhite) (J. Scott Applewhite)
--

The hope of the organizers of Saturday's "One America" rally in Washington was that a big turnout -- something on par with the crowd Glenn Beck and Sarah Palin attracted at the end of August -- would alter the media's midterm campaign narrative, which to date has emphasized the energy of the Republican base and the likelihood of sizable GOP gains in November.

And, to the organizers' credit, the turnout, to the extent it could really be measured, seemed impressive enough. But while we might want to take this as proof that the "enthusiasm gap" is vanishing and that the left is suddenly mobilized in a way that will save Democrats in November, the reality is that Saturday's rally was not an election-altering event.

For one thing, the number of people who showed up is pretty much meaningless. Surely, we've learned by now that the size of crowds at political rallies can be, and often is, a woefully misleading indicator of mass opinion. Remember when Ralph Nader was drawing 15,000 paying attendees to his "super-rallies" in 2000? And when he finished with 2.7 percent of the vote?

So the fact that a consortium of 400 or so progressive groups managed to turn out tens of thousands of people doesn't tell us anything significant about November. With the proper planning and resources (and the right weather), they should be able to do this in any political climate. Maybe it would have been news if all of their efforts had yielded an obviously paltry crowd, but whether the exact number of attendees was 75,000 or 175,000, it doesn't really matter. As Ed Schultz, who relentlessly promoted it on his radio and television shows, put it when Glenn Beck and Sarah Palin attracted a giant crowd to the Mall in August: "It ain't a big deal!"

He was right then, and anyone who makes the same claim now about "One America" is equally right. Of course, it's true that the Beck/Palin-fest on August 28 generated far more attention from the press, which regarded it as a cultural/political phenomenon and, in some cases, corroborating evidence for the "Democrats are screwed in November" narrative. So now that the left has produced a sizable crowd of its own, shouldn't "One America" be treated as equally significant?

Again, it's tempting to say yes, but the answer is no. The main reason for the Beck/Palin event's significance was Beck and Palin themselves. The rally was built around two media celebrities who are as odd and frightening as they are compelling. Their success perfectly represents this moment in American history, with severe economic anxiety and the election of a black president with a Muslim middle name prompting millions of conservatives to embrace an unusually intense and urgent brand of paranoia and hysteria.

And the siege mentality that was celebrated on August 28 has clearly played a defining role in American politics this year. The spirit that was on display is the same spirit that has swept Republican electorates in states like Utah, Nevada, Alaska, Colorado, Florida, Delaware, New York, to name a few, where fringe, Tea Party-friendly candidates have won nominations for major office this year. These Tea Party candidates, like Beck and Palin themselves, are tailor-made for this era (at least within the Republican Party). Their emergence may be the biggest story of the year.

Saturday's rally, by contrast, was a tribute to something that is hardly new to America or unique to this moment: the ability of unions and grassroots activist groups to generate a crowd. The closest thing to a Beck figure to take the stage was probably Schultz, whose MSNBC show generates a fraction of the audience of Beck's Fox program. Schultz is an interesting enough guy, but the rhetoric he and the other speakers spouted on Saturday was pretty much boiler-plate union rally rah-rah stuff. In this sense, the more relevant left-of-center extravaganza of 2010 is yet to come: Jon Stewart's "Rally to Restore Sanity" on October 30. Stewart, as a political force, is a far more of a wild card than any person or group represented on Saturday.

This isn't to say that an event like One America can never be significant. It's just that context is important. Case in point: the union-organized "Solidarity Day" march of 1981. Don't worry if you haven’t heard of it; it's largely been lost to history. But at the time, it served an important symbolic purpose.

The march was called by organized labor leaders who had just seen their own base defect to Ronald Reagan in the 1980 election. And in the early months of Reagan's presidency, he and the GOP seemed to make even more headway with blue-collar "Reagan Democrats": Voters who had never previously identified as such began calling themselves Republicans, and the fear was real that the white working-class -- a pillar of the Democratic coalition for decades -- was switching sides for good.

But the march came as the economy was beginning to slip into a recession, and as Reagan's popularity -- stratospheric when he first took office -- began to drop. The blue collar voters who had provided him his margin the year before were beginning to return to the Democratic fold. Thus, the Solidarity March was a significant event: the men and women who gathered represented a pivotal, election-defining bloc. They'd given Reagan the White House in '80, and they ended up giving the Democrats a banner year in the 1982 midterms.

But that kind of dynamic just doesn't exist right now. It's true that the media has put too much emphasis on the significance of Tea Party rallies and the Beck/Palin event, which reflect only the energy and psychology of the Republican Party base, and not the broader electorate. But it's also true that the Republican base is a whole lot more interesting to watch this year than the Democratic base.