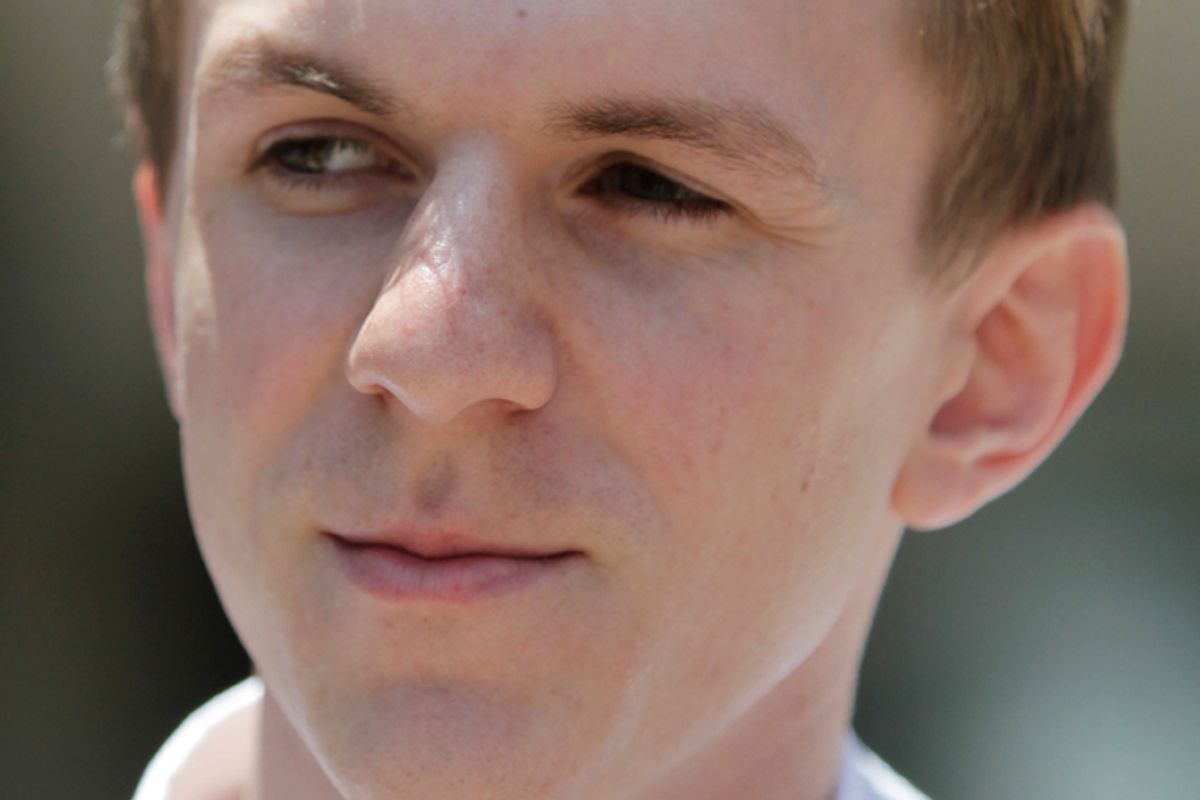 Conservative provocateur James O'Keefe hasn't done much worth crowing about since he took down ACORN with misleadingly edited secret videotapes. He was feted as a right-wing celebrity. He got arrested for trying to sneak into a senator's office under false pretenses. And then he had his attempted prank of a CNN reporter backfire when the reporter backed out after discovering that he planned to lure her onto a boat and "seduce" her. O'Keefe has responded, finally, to this last embarrassment. Unsurprisingly, he has no regrets, and the liberal media is the real guilty party.

O'Keefe's defense -- posted, of course, on Andrew Breitbart's "Big Government" -- rests on us believing that the prank-outlining document obtained by CNN was a draft that O'Keefe did not plan on actually following. He says ideas for stunts are sent to him all the time (like a fancy Hollywood producer!) and sometimes he approves of the idea behind a prank without endorsing everything about it.

As you can imagine in our line of work, we get lots of leads, ideas, schemes and “punked” style plans sent to us all the time. If you were to roam through my personal emails there are many outrageous plans, some parts of which I may approve of in principal with an “I like it” in an email thread. But I may well object to a host of things about the plan, though I like the objective.

When the CNN idea was pitched to me, I’ll admit that I liked the basic absurdity of meeting Abbie Boudreau on a boat and the idea of counter-seduction satire executed in a tame, humorous, non-threatening manner. After all, as all liberal reporters do, she was trying to “seduce” (a metaphor) me so she could get more for her story. It would be fun, I thought, to turn the tables in jest. However, I was repulsed by the over-the-top language and symbolism that was suggested in the memo that was sent to me, and never considered that for a moment.

The gross document in question wasn't submitted by a fan. It was drafted by Ben Wetmore, with whom O'Keefe has worked for years. O'Keefe has called Wetmore his mentor. O'Keefe and his attempted phone-tampering buddies crashed at Wetmore's Louisiana house the month of the Landrieu office incident.

The rest of O'Keefe's defense lies in still not understanding why unwanted "seduction," on a boat, under false pretenses, while being secretly filmed, might not just be considered harmless fun.

In my version, the reporter was never going to be placed in a threatening situation. She would have had to consent before being filmed and she was not going to be faux “seduced” unless she wanted to be. If a CNN reporter would be willing to engage in such a folly, it might even be more newsworthy than Rick Sanchez’s firing. (CNN also has Elliot Spitzer on payroll. He’s done more outrageous things than anything I’ve ever gotten in my in-box).

The sexually explicit document CNN is now “reporting” on was never going to be implemented as written. She saw how I was dressed that day, with my usual blazer and collared shirt. In the document she reported as being “authentic,” I was supposed to have been dressed with my chest exposed, slicked backed hair, with gold chains. That ought to have been a red flag the document was not a reflection of my true intentions. Ms. Boudreau was never going to be put in the bizarre situations outlined in the document CNN reported. There were no mirrors, sex tapes, blindfolds, fuzzy handcuffs, posters of naked women, or music. Sorry, you were not going to see my face saying the words “Bubble Headed Beach Blonde who comes on at 5” into a video camera. Those are Don Henley lyrics – and we know, thanks to Chuck DeVore, how much Henley loathes parody.

Not seduced unless she wanted to be! I mean, his "prank" as described here makes even less sense as a "political" act than the plan Wetmore wrote. He was going to lure her onto a regular boat with nothing outrageous or unusual about it, dressed conservatively, get her consent to film her, and then only "pretend" to "seduce" her if he somehow determined that she would be into that?

O'Keefe accomplice Izzy Santa seemed to think -- on the day of the planned punking -- that O'Keefe's boat was full of strawberries and champagne, and that the plan was to creep Boudreau out. There's no point to getting her on the boat and filming her if you're not going to be gross. Even if O'Keefe found elements of Wetmore's idiotic script objectionable, the idea behind it remains the same.

(As for O'Keefe's dress: Even if he was in his usual uniform of blazer and collared shirt that day, history suggests that footage of O'Keefe in the "funnier" get-up -- perhaps surrounded by "funnier" decor on the "sex boat" -- would have ended up in the completed video.)