The comic geniuses of "Real Housewives"

In a tween-dominated age, Bravo's witty, middle-aged women are a throwback to the golden age of character actresses 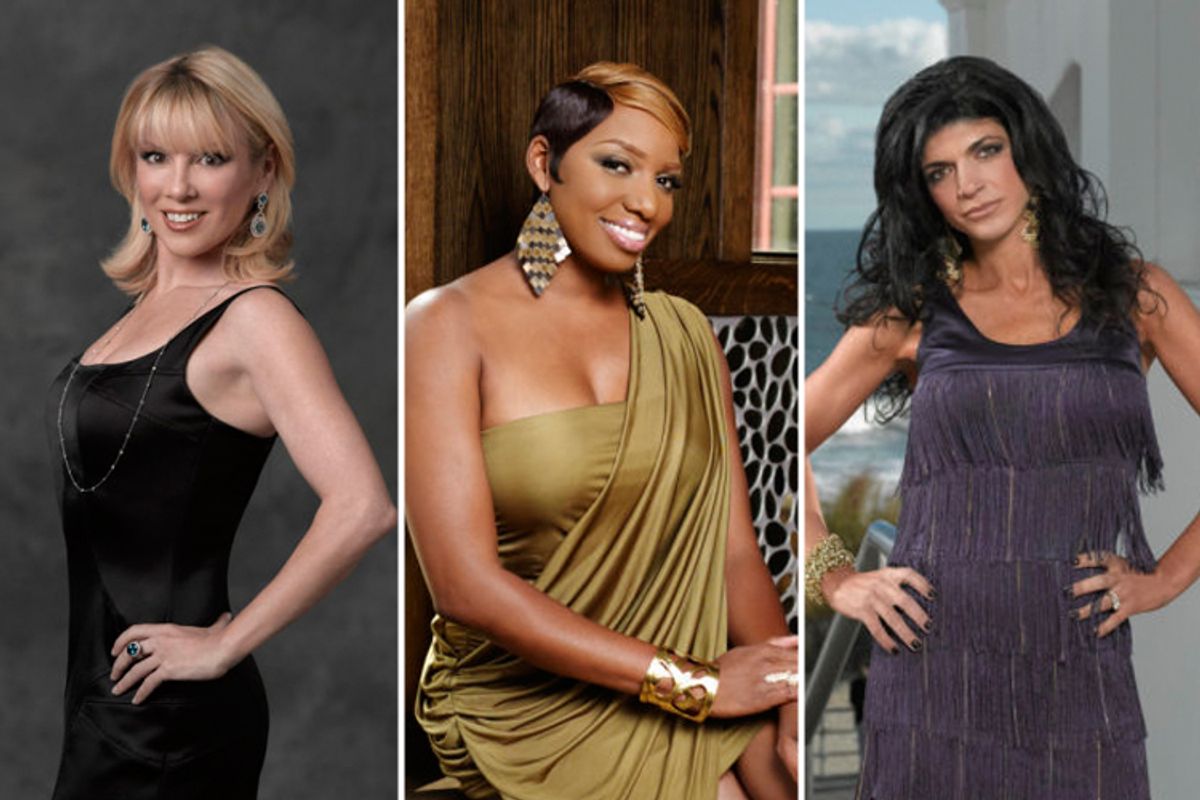 To say I am a fan of Bravo's "Real Housewives" franchise is a massive understatement. I watch every iteration, from the original "Real Housewives of the O.C.," featuring gold-digger-cum-boyfriend-recycler Gretchen Rossi, to my favorite, "Real Housewives of New York City," starring the bipolar antics of the wide-eyed fawn Ramona Singer, whose drunken declaration that it was "Turtle Time" on a pier in St. John's last season made it into the Emmy reel commemorating the "Reality" category. The reunion shows are like crack to me; the cast members of each series like trading cards.

I'm not much of a reality show fan. Besides the occasional TLC show about cake or polygamy, my DVR is otherwise packed with critically approved scripted television, like "Modern Family" and "Boardwalk Empire." But despite the bottomless spate of new "Housewives" series that Bravo keeps trotting out, the "Real Housewives" franchise still fascinates and enthralls me.

Why? The "Real Housewives" shows represent one of the few remaining places on the increasingly tween-dominated TV landscape where I can still watch women older than the stars of "Gossip Girl." What's more, the rhythm of the dialogue on these shows (whether or not they're producer-manipulated) reflects an improvisational cadence of conversation that I find, at its best, reminiscent of Nichols and May or the funniest scenes from "Curb Your Enthusiasm." And finally, but most important, I credit my love of the "Housewives" franchise to my enduring fandom of character actresses.

Season 3 of "The Real Housewives of Atlanta," which begins this Monday, Oct 4, and marks the addition of two new cast members, already looks to be a crowd-pleaser. The premiere episode features, among other bloggable scenes, a memorable shouting match between housewife Nene and her gay friend Dwight at a shop called the "B Chic Shoe Boutique." And on Oct. 14, Bravo will launch the newest addition to the "Housewives" family: "The Real Housewives of Beverly Hills." It stars Kelsey Grammer's ex-wife, two of Kathy Hilton's sisters, and a British femme fatale known as Lisa VanderPump. As Michael K from the blog Dlisted described it, the show seems to be "what the inside of Jackie Collins' head looks like." Sign me up.

It's easier to enjoy the "Real Housewives" if you think of it as the new "Dynasty" -- just like Aaron Spelling's camp tour de force, these shows are ensemble soap operas that happen to also be comedies, starring real-life equivalents of characters played by, say, Jennifer Coolidge and Joanna Lumley. Even Lynda Erkiletian from the "D.C." cast bears an uncanny resemblance to "Arrested Development's" Jessica Walter; her costar Mary Schmidt Amons, the spitting image of Stockard Channing.

Over the last 10 years, the trend has been for shows to write for the funny "character" male lead (read: overweight guy), and cast a pretty wife who won't massacre a joke, but doesn't have enough of a personality of her own to stand on. Despite the occasional "mom" cameo on prime time (think Jan Hooks as Jenna's mom on "30 Rock," or Beverly D'Angelo playing opposite Busy Phillips on "Cougar Town"), the majority of television still sways toward the casting of generically pretty young women in its leading roles -- blond, thin, under the age of 35, with non-ethnic noses. And even today's most formidable, talented comic actresses tend to have looks that are somewhat interchangeable: "Community's" Gillian Jacobs, "Forgetting Sarah Marshall's" Kristen Bell, "Glee's" Heather Morris.

With all due respect -- I know America loves its blondes -- but whither Teri Garr? Judy Holiday? Is Kate Hudson all our generation has to speak of when it comes to Goldie Hawn's legacy? Because if so, that is horrible. The "Real Housewives" franchise runs against that trend: They're shows centered around a cast of witty, strong middle-aged women -- who consistently make me LOL.

Maybe I'm biased because I'm over 30 and I wasn't raised with the Nickelodeon and Disney TV show model (which features performers that are the same age as their target viewers), but my taste preferences have always skewed toward entertainment starring, well, grown-ups. I may be in the minority, but I just find adults over 35 more interesting. I grew up with "Designing Women," "Murphy Brown" and "The Golden Girls" on TV, and watching "Troop Beverly Hills," "Working Girl" and "Steel Magnolias" in the theaters. Leading roles that would, today, be played by Gwyneth Paltrow or Rachel Bilson then went to genuine comedic ingénues like Julie Hagerty and Joan Cusack. The '70s and '80s were kinder eras to character actresses -- before the time when somehow, Cameron Diaz became considered a "comedienne" -- and the popularity of shows like "Real Housewives" prove how hungry audiences are, still, for personalities, not just the Photoshop-perfect skin-having and body fat-deficient mainstays of Us Magazine's "Who Wore It Better?" feature.

The dialogue on the "Real Housewives" is a combination of hilarious malapropisms (like when "New Jersey's" Danielle Staub compared cast mate Caroline Manzo to the matriarch on "The Sopranos" by saying "she's not Carmello") and repeatable nuggets of genius (like Nene's rhetorical exclamation to Kim, "Is your wig squeezing your head too tight, heifer?"). It makes even the most vérité setups and punch lines from scripted shows seem canned; the popularity of reality television may have brought with it an expectation that its dialogue sound somewhat authentic, but even the best writers couldn't replicate such marvelously unique and broad characters. The "Housewives" all have personalities grounded in character-based comedy; I could listen to them talk about anything.

And the "Real Housewives" shows are awash with timelessly funny archetypes -- particularly the "Cool Mom." Just like Amy Poehler's character in "Mean Girls," there are plenty of "Real Housewives" aching to be friends -- not just moms -- to their teen and tween daughters. Think of "O.C." housewife Lynne Curtin's two-seasons-ago shopping spree with her daughters at Intermix, or "Jersey" star Jacqueline Laurita's mother-daughter "sexy face" contest/photo session with her teenage nightmare, Ashley. Stealing focus from your own daughter is one of the many hilarious -- and intrinsically female -- characteristics of the un-self-aware mother: These are funny women, whether or not they're in on what makes them so funny.

That said, I do think the pendulum is slowly shifting back to a place where more character leads fill out a cast, at least when it comes to television (mainstream film is far blander -- as I write this, a giant poster for Katherine Heigl's latest feces-stained baby rom-com stares at me from my apartment view of Houston Street, in Lower Manhattan). When I watch Amy Poehler anchor the cast of "Parks and Recreation" or Jane Lynch steal scenes from tight-abbed teenage belters on "Glee," or I see some of the choices the female cast members of "SNL" make -- whether it's Kristen Wiig's undermining "Penelope" character or Nasim Pedrad's nerdy high schooler who just wants to hang out with her mom at parties -- I have hope that this next generation of character actresses will be appreciated for what makes them unique. It may not be the renaissance of riches ushered in around the birth of the women's movement and the rise of auteur filmmaking (which brought us Shelley Duvall, Lily Tomlin -- not to mention the first "SNL" cast, with Laraine Newman, Gilda Radner and Jane Curtin), but it's a start. Until then, I have the "Housewives" to keep me warm.