Footage of Cebu Pacific staff dancing during a safety demonstration goes viral. Does everything need to be a show? 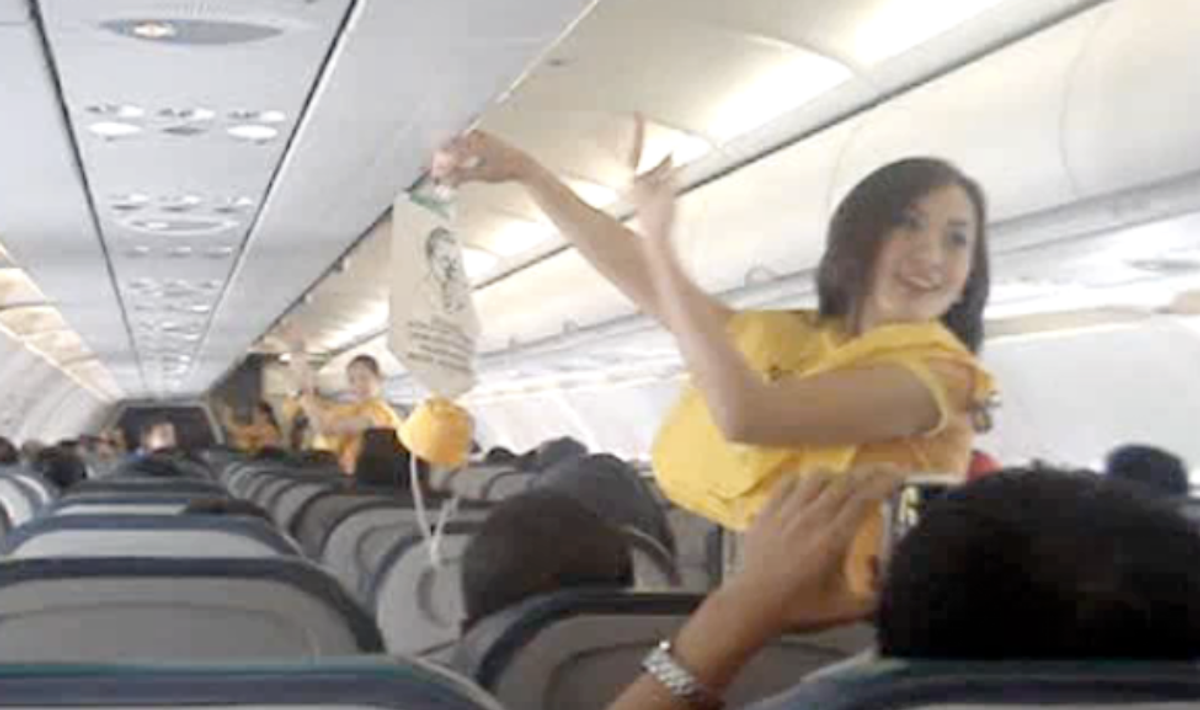 If you've been on an airplane more than once in your life, chances are high you're a master at tuning out the airline safety instructions. Are we on a plane? Are the exits still at the front, the sides, and the rear? Yeah, then I'll be flicking through the SkyMall while the crew explains how to use a seatbelt for the benefit of the single person on board who may never have seen one before. It must be demoralizing for the crew, explaining the logistics of what to do in the event of what is enticingly referred to as a "water landing" to an audience only slightly less hostile than the crowd at open mic night at the Improv. And so to combat passenger ennui, airlines have in recent years attempted all manner of attention-getting strategies, from jokey repartee to adorable safety videos. But it turns out that nothing gets those eyeballs facing front like a pack of cute women and the irresistible strains of Lady Gaga.

When a passenger on a flight on Philippine airline Cebu Pacific last week recorded the crew's lighthearted safety demo, featuring stewardesses shimmying with seat belts and life jackets to the thump of "Just Dance," it was only a matter of minutes before the clip would take off on YouTube like a jet trying to break its own on-time record. As the clip climbs toward 7 million views on YouTube, it's evident that when it comes to amateur videos from inside the plane, dancing flight attendants beat the pants off dramatic near-catastrophes.

Watching Cebu flight attendants bop around emergency procedures as the soundtrack segues into "California Gurls" is certainly not an unpleasant experience. The crew seems to have a good time putting a winking spin on a familiar experience, and who knows? Perhaps they're getting the people on the plane – and even jaded YouTube viewers – to note the information they might one day need to save their lives.

But the Flight Attendants' & Stewards' Association of the Philippines is not amused.  In a statement issued Monday, the FASAP condemned the "negative and sexist" "gimmick," noting, "Flight attendants are safety professionals and to require them to dance in front of passengers is demeaning and undignified." And indeed, you don't have to look far online to find requests that Cebu add lap dances to its in-flight entertainment.

Those millions of YouTube views, however, aren’t just about the ostensible hotness of the Cebu crew (if you want to find something a little more prurient out there, the Internet is happy to oblige). The clip has become a sensation because it's sweet, it's unexpected, a mini-flash mob on an airplane. Who would begrudge the average flier, cramped for hours in an inhumanely small space, a little levity? And hey, aren't dancing flight attendants preferable to rageaholic ones? As Cebu Airlines representative Candice Iyog told CNN, "Just because we're the largest airline in the Philippines doesn't mean we can't have fun. We thought it was fresh and unprecedented."

But the Cebu dance party remains unsettling, for a variety of reasons. Consider first the possibility that's it's quite unlikely that Cebu gave a toss about actually getting passengers to consider the serious risks of air travel when it decided to trot out its flight staff like they were doing the VMAs. Were it your plane actually hurtling toward the tarmac, would you want to be wondering if you were shaking your hips correctly as you donned your oxygen mask?

Which brings up the bigger, more dispiriting question – namely, must everything be taken with a spoonful of sugar, even if the sugar overwhelms the message itself? I'm not suggesting airline safety demonstrations need to resemble a scene from "Scared Straight," and God knows there's more than enough about airline service that's already plenty awful. Travel shouldn't be the form of low level torment it so often is, but if you're not five years old, why should an airline try to make it like Christmas morning either? We're in the air everybody! WHEEEEEEE! Should the passengers get little plastic wings too?

There's something infantilizing about an airline assuming – apparently correctly – that it literally needs to bring out the dancing girls for passengers to pay attention. It's just travel -- unromantic, inglorious travel. Maybe instead of airlines trying to convince us how awesome it is to just dance, we can simply board a plane, and just, for a change, fly.