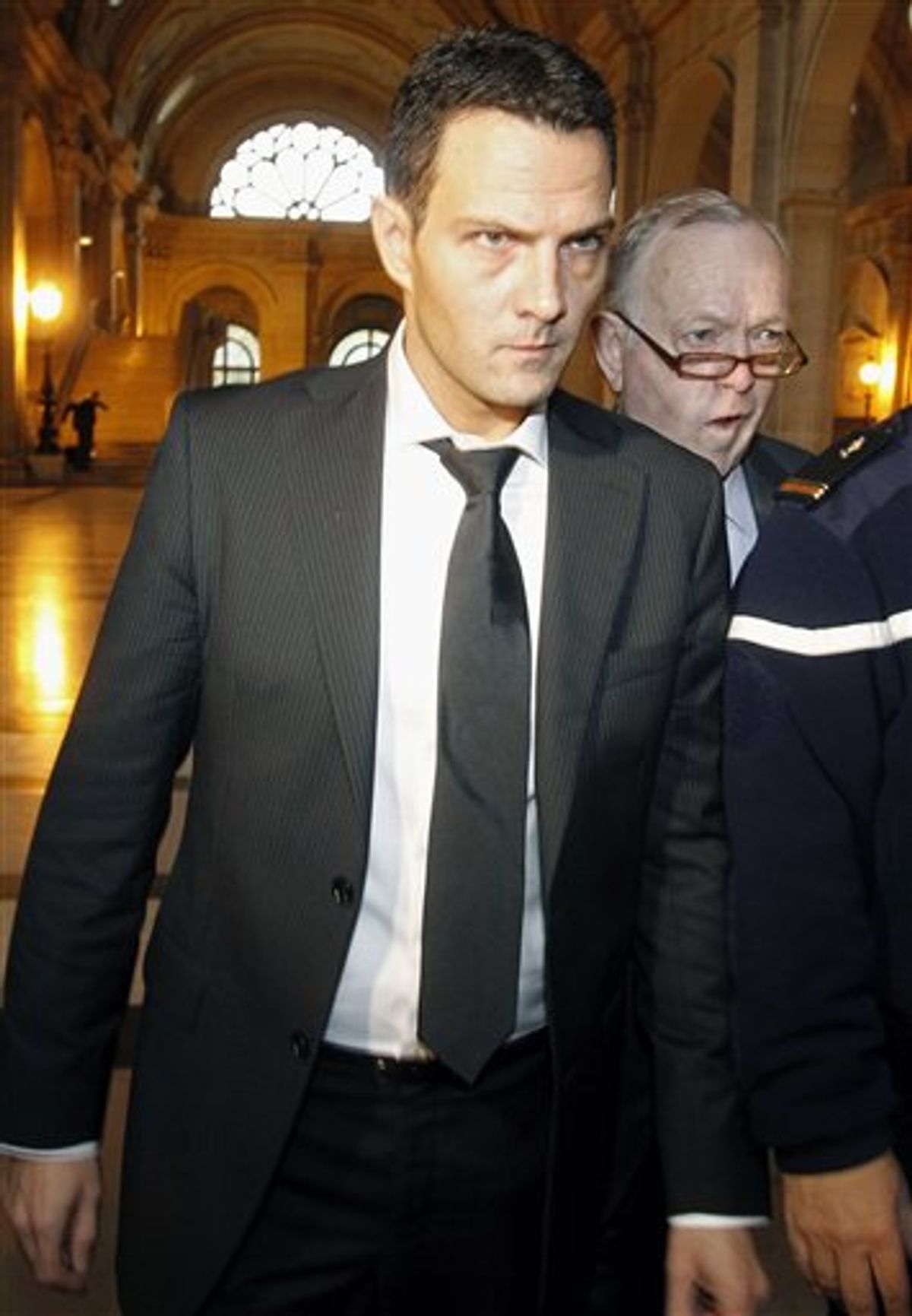 ALTERNATE CROP TO PAR101 DATED OCT 5 2010 - Jerome Kerviel, followed by his lawyer Olivier Metzner, arrives at the Paris courthouse, Tuesday Oct. 5, 2010. The Paris court will hand down a verdict in the case of the former French trader accused of masterminding one of history's biggest trading frauds and costing one of France's largest banks billions in losses. Kerviel, the 33-year-old former index futures trader at Societe Generale SA, risks five years in prison and a euro 375,000 ($513,000) fine on charges related to the claim that he covered up bets worth nearly euro 50 billion, or more than the bank was worth, between late 2007 and early 2008. (AP Photo/Laurent Cipriani) (AP)
--

Former Societe Generale SA trader Jerome Kerviel was convicted on all counts Tuesday in one of history's biggest trading frauds, sentenced to three years in jail and ordered to pay the bank a mind-numbing euro4.9 billion ($6.7 billion) in damages.

The ruling marked a huge victory for Societe Generale, one of France's most blue-blooded banks, which has worked to clean up its image and put in place tougher risk controls since the scandal broke in 2008.

The 33-year-old former futures index trader stood expressionless as the court convicted him of all charges and pronounced a five-year sentence with two years suspended. Kerviel was found guilty on charges of forgery, breach of trust and unauthorized computer use for covering up bets worth nearly euro50 billion between late 2007 and early 2008.

In a stunning blow, the court also ordered Kerviel to pay the bank back the euro4.9 billion that it lost unwinding his complex positions in January 2008 -- a punishment he would almost certainly be unable to pay.

There were audible gasps and surprised looks when presiding judge Dominique Pauthe read out the damages to a packed courtroom of 150 reporters, court officials and members of the public.

"I have the feeling Jerome Kerviel is paying for an entire system," said Metzner, noting that his client hadn't benefited financially from the fraud.

Metzner said Kerviel would appeal and will remain free pending that appeal.

The damages are also suspended pending any appeal, so Kerviel wouldn't be ordered to pay right away. It wasn't immediately clear how he could do so, or whether the bank really expects to see that money back. French media calculated that based on his current salary of euro2,300 ($3,150) a month as a computer consultant, it would take him 177,536 years to pay off the damages.

While trading for the bank, Kerviel took home a salary and bonus of less than euro100,000, or about $155,700 -- a relatively modest sum in the financial world.

Kerviel sat with his arms folded and his legs crossed during the first 45 minutes of the hour-long hearing, sitting alone in the front row of the courtroom with seven empty wooden chairs to his left. He barely blinked as each guilty verdict was read out. He stood for sentencing in a dark suit and tie, frowning and silent.

"He is disgusted," Metzner said of Kerviel's feeling about the ruling, adding that the court had judged the bank "was responsible for nothing, not responsible for the creature that it had created."

"I hope you all will donate a euro to Jerome Kerviel," the lawyer told TV cameras and reporters,

Kerviel, a soft-spoken and debonair man from western Brittany, has garnered considerable public appeal in France for his image of being a scapegoat for powerful corporate interests. Kerviel maintained that the bank and his bosses tolerated his massive risk-taking as long as it made money, which he did at first, racking up euro1.4 billion in profits for Societe Generale in 2007, the judge noted.

During the proceedings, both sides admitted to mistakes but Kerviel insisted his bank superiors knew what he was doing. Societe Generale's former chairman acknowledged there were problems in monitoring the trader's work.

The bank says Kerviel made bets of up to euro50 billion -- more than the bank's total market value -- on futures contracts on three European equity indices, though his net position appeared unremarkable because he balanced his real trades with fictitious transactions. The bank says his actions cost it euro4.9 billion.

Still, an internal report by the bank found managers failed to follow up on 74 different alarms about Kerviel's activities.

Employed by Societe Generale since 2000, Kerviel worked his way up from a supporting role in an office that monitors trades to a job on the futures desk where he invested the bank's money by hedging on European equity market indices.

He was arrested in January 2008 and held for six weeks in Paris' notorious La Sante prison. Societe Generale's shares rose slightly after the announcement of the verdict, trading up 1 percent at euro41.20 ($56.46)