The administration initially rejected the idea of following in Jimmy Carter's footsteps. Why the change of heart? 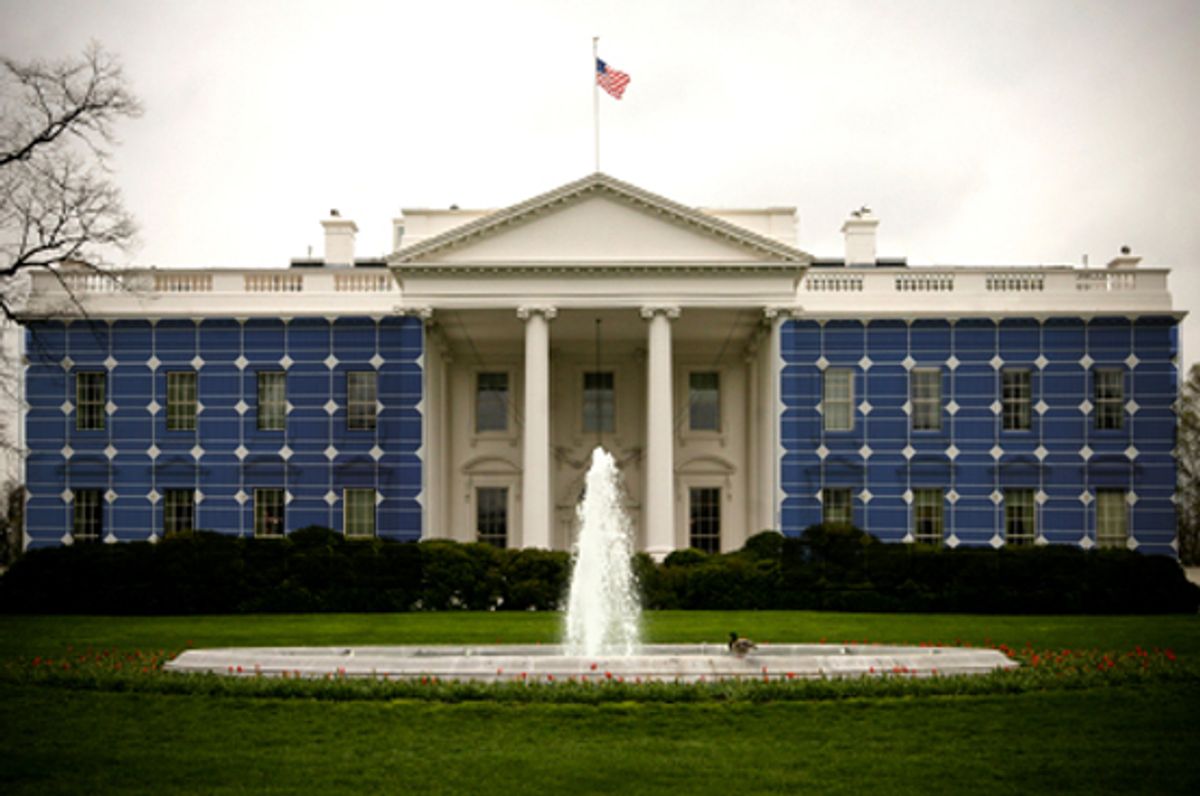 So Chief of Staff Rahm Emanuel is out of the White House, and suddenly, solar panels are back in. This is either a welcome change of tone, prefiguring a new push on climate change and renewable energy, or yet another example of how a too-cautious administration keeps stepping on its feet.

In September, the writer and climate change crusader Bill McKibben sent a jolt of dismay through the environmental community after recounting a distressing trip to the White House. McKibben and some young activists had come up with what they thought was a great idea. They had located one of the solar panels that President Jimmy Carter had installed on the roof of the White House (later removed by Ronald Reagan) and they decided to bring it back to Washington for a triumphant reinstallation.

They made it into the White House, but then got stonewalled. When the college-age activists accompanying McKibben asked why the administration wouldn't do the "obvious thing" and put solar panels on the White House, they couldn't get a straight answer.

To their queries, the bureaucrats refused to provide any answer. At all. One kept smiling in an odd way and saying, "If reporters call and ask us, we will provide our rationale," but whatever it was, they wouldn't provide it to us.

It was all a little odd, to say the least. They refused to accept the Carter panel as a historic relic, or even to pose for a picture with the students and the petition they'd brought with them. Asked to do something easy and symbolic to rekindle a little of the joy that had turned out so many of us as volunteers for Obama in 2008, they point blank said no.

The Obama administration's reluctance to put a Carter-era solar panel on the White House roof was understandable, even if repulsively pusillanimous. The last thing the White House wanted to do was to give the right another talking point comparing Obama to Jimmy Carter. You can see the wheels turning -- Carter put solar panels on the White House, and ended up a one-term president mocked for decades by Republicans.... run away!!!

But now, a few weeks later, Energy Secretary Steven Chu announces that the White House will install solar panels on the roof and a solar water heater. Bill McKibben applauds, but would be well within his rights to ask, what took you so long?

When McKibben and his cohorts arrived at the White House, the "bureaucrats" could have politely told them that, while it didn't make sense to install some 30-year-old technology on the premises, they did nonetheless intend to make a big solar push. There would still be a hit from the right-wing news cycle, but, more important, Obama would have given his own supporters a reason to feel good.

Instead, the White House managed to bum environmentalists out, and then, a few weeks later, go ahead and invite the Carter-Obama comparison anyway. That's just bungled political management.

Or maybe, just maybe, it's a sign of a changed tune at the White House. I'm not so sure that there's that much of a difference between new White House chief of staff Pete Rouse and Rahm Emanuel, but it's at least possible that the turnover in staff is signaling a new determination to press forward, with a little less caution. Let's hope so, anyway.