A flood of "red mud" devastates western Hungary. Whom to blame? How about the Industrial Revolution? 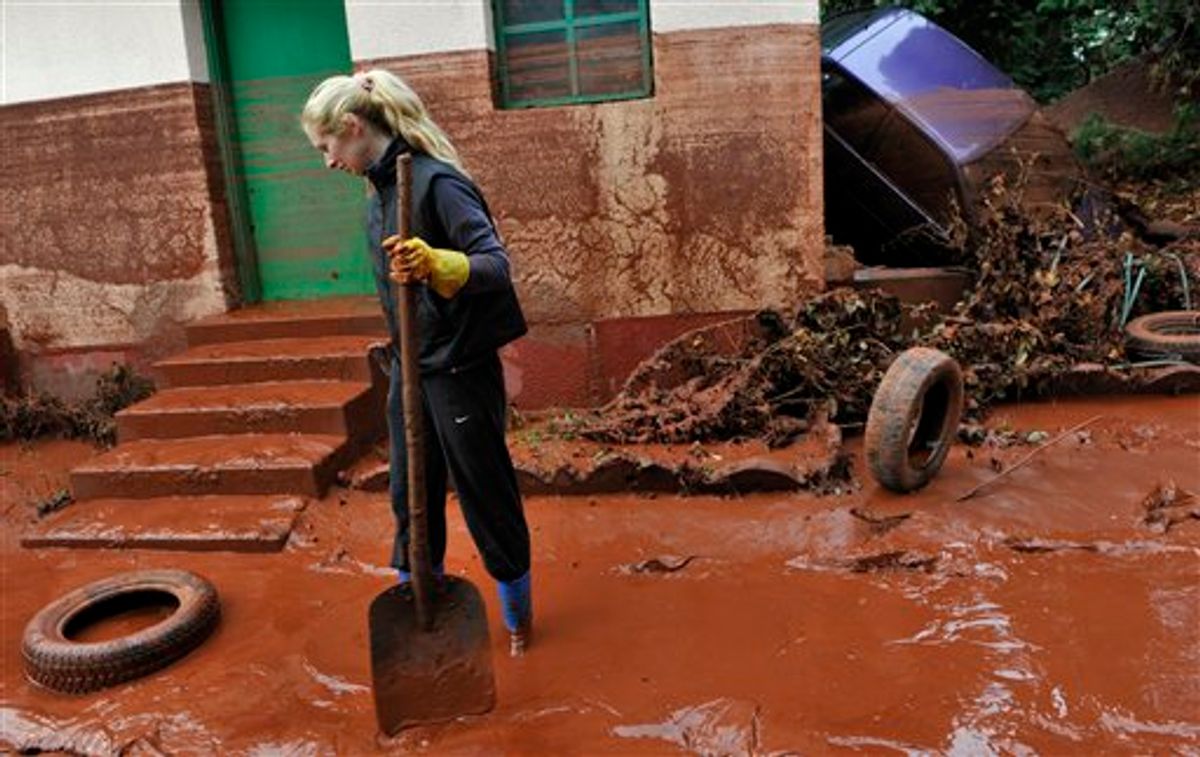 Tunde Erdelyi is seen in her yard flooded by toxic mud in the town of Devecser, Hungary, Tuesday, Oct. 5, 2010. Monday's flooding was caused by the rupture of a red sludge reservoir at an alumina plant in western Hungary and has affected seven towns near the Ajkai Timfoldgyar plant in the town of Ajka, 100 miles (160 kilometers) southwest of Budapest. (AP Photo/Bela Szandelszky) (AP)
--

After weeks of heavy rain, a retaining dam at an aluminum ore processing facility in Hungary collapsed on Monday, releasing a toxic flood of "red mud" containing arsenic, lead, cadmium, chromium and other hazardous substances that swept through three villages and killed four people. A statement from the company, MAL Zrt, is anything but reassuring:

Dissecting the situation, the management figures that it would not be able to detect the signs of the natural catastrophe or could be able to do anything to avert it.

As disclaimers of corporate responsibility go, that's pretty forthright. Tough luck, all you downstream residents wading through caustic sludge. We never could have seen this coming, and even we had, we couldn't have done a damn thing.

Local environmentalists are pinning the blame on the wave of privatization that dismantled Hungary's state-owned enterprises in the 1990s, claiming that MAL Zrt put profits ahead of safety. That may well be true, and it offers up a seductive metaphor illustrating the perils of unchained capitalism. But then again, Communist bloc governments were not particularly well known for their environmental stewardship, either. Bauxite, the ore from which aluminum is derived, is one of Hungary's main natural resources, and the state has been smelting the metal on an industrial scale since World War II. And no matter who runs the show, commissar or CEO, there's no getting around the fact that processing bauxite ore into aluminum is a nasty, nasty business, and has been so since the 1880s, when the Austrian chemist Karl Bayer figured out an efficient way to do so. The "Bayer process" involves bathing bauxite in a solution of sodium hydroxide at a temperature of 175 degrees Celsius, which converts the alumina into aluminium hydroxide and some leftovers -- that good old "red mud," which, Wikipedia dryly informs us, "presents a disposal problem."

(Bayer, incidentally, was the son of Friedrich Bayer, founder of Germany's Bayer Chemical, the inventor of both aspirin and heroin.)

Bad weather, corporate irresponsibility, the toxic waste inseparable from a key industrial process ... the only thing that separates Hungary's mess from the larger challenges that humanity's activities pose to ourselves and the planet is the striking color.

Environment How The World Works