A Zogby poll breaks down the politics of smartphones. But the real agenda is classic anti-regulation lobbying 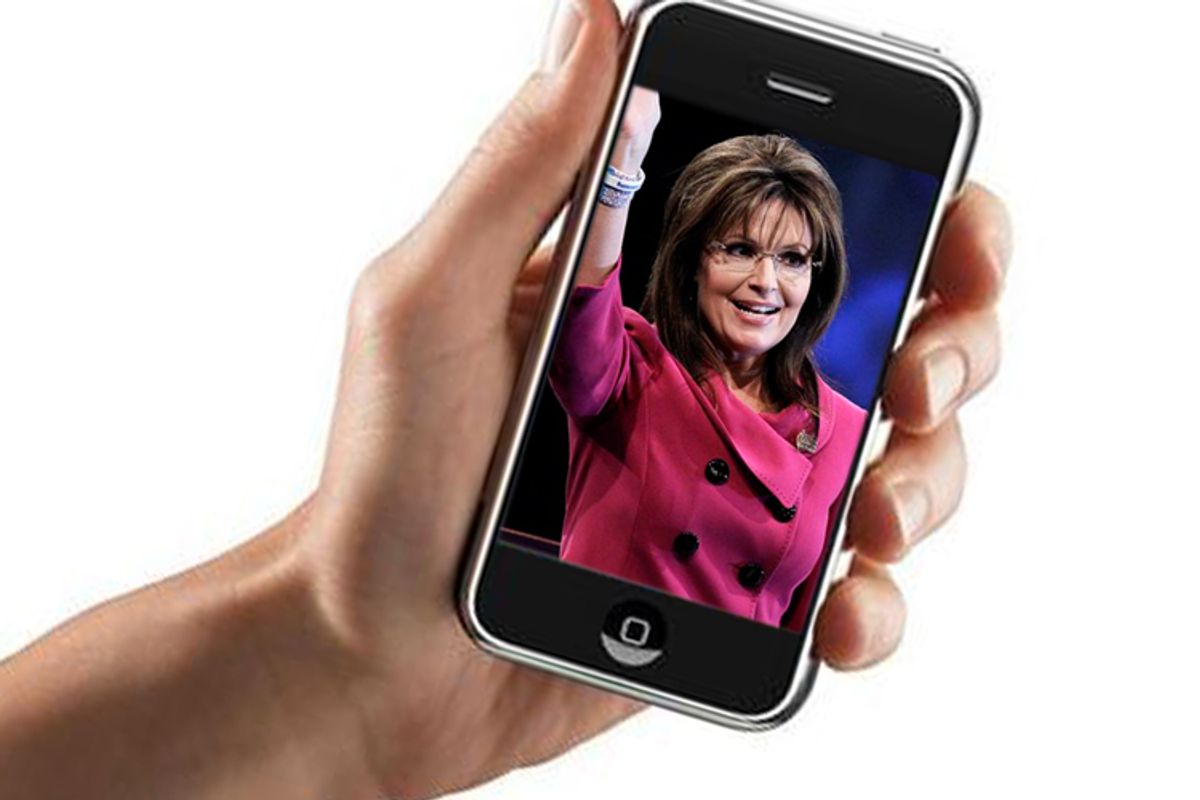 iPhone users trend Tea Party? That's the message being pushed by CALinnovates, a "California technology coalition" that sent out an e-mail blast Wednesday morning pushing the results of a new "national" online Zogby poll. Among the eyebrow-raising results: "iPhone users were twice as likely to say that Sarah Palin speaks for them than Android and Blackberry users."

"The results tell us a lot about mobile phone users and political trends," said Erin Lehane, CALinnovates.org Executive Director. "Now the next time you are on a plane waiting to take-off, you can just look at your neighbor sitting next to you tweeting on his iPhone and know that he is more likely to be adding applications to track where the nearest Tea Party rally is than your neighbor to the left of you typing away on his Blackberry."

Zogby online polls tend not to rank among the most reliable in the world of opinion surveying, and my gut sense on reading the press release was that it was highly unlikely that Californian iPhone users were gung ho Palinites. Indeed, as I was searching through the CALinnovates Web site to learn more about the organization, I learned that earlier in the year, the group had been touting a California-specific poll that found iPhone users more likely to support Jerry Brown for Governor while Blackberry users favored Whitman. So go figure.

But why would a California tech policy group think the iPhone Tea Party connection was worthy paying attention to in the first place?

The answer, I think, lies in some additional polling information that CALinnovates mentions in the press release, almost in passing.

All likely voters are three times more likely to support a hands off approach to the Internet and supportive of not adding regulations. Of those voters, nearly 70 percent of iPhone and Android users and 50 percent of Blackberry users support keeping the Internet free of additional regulation.

And there you have it. Keeping the Internet free of additional regulation! Which, I'm pretty sure, means opposing FCC efforts to ensure universal broadband access to the Internet, as well as blocking beefed up requirements for "net neutrality" -- the effort to prevent Internet service providers from deciding how fast data gets transmitted via the Net, according to how much content providers pay.

iPhone users, regardless of party affiliation, should be suspicious. What if AT&T could decide that video provided by Apple would be delivered more quickly to your phone than video from Google, or Comcast's Hulu network, simply because Apple paid the telco a premium?