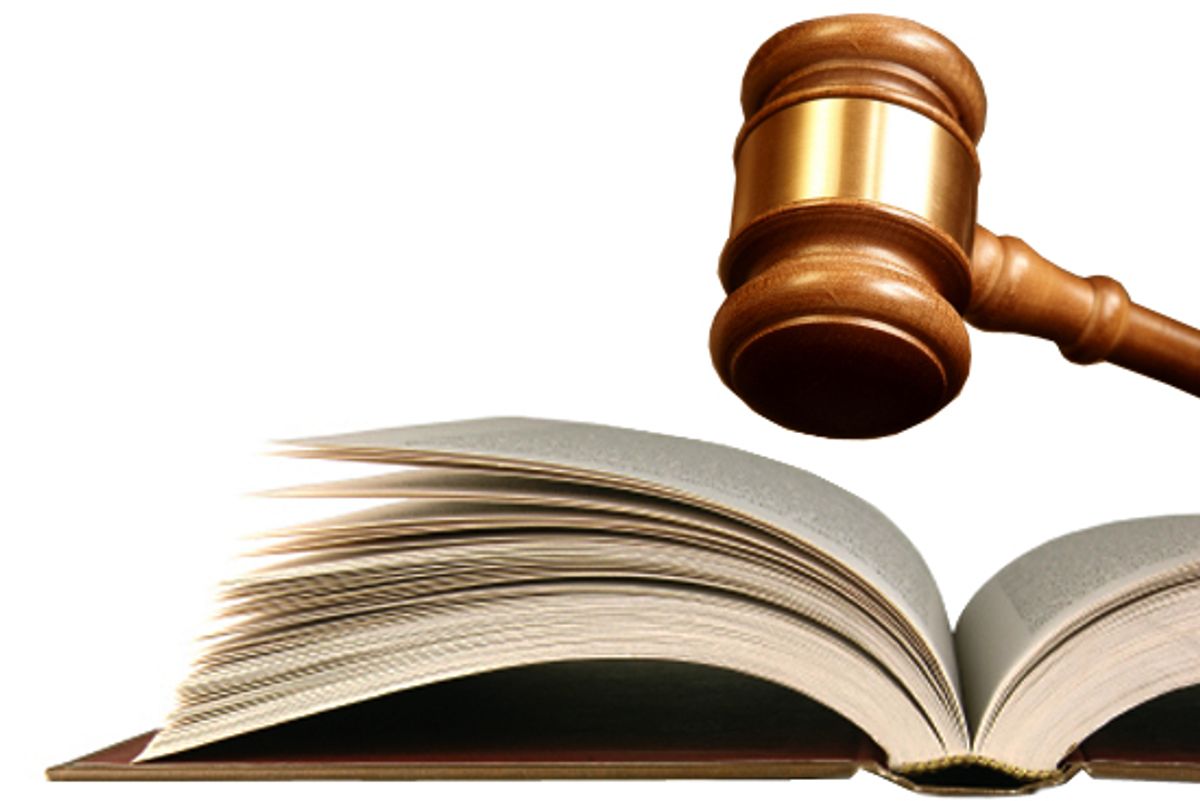 Last week was Banned Books Week, a worthy institution calling attention to efforts to remove books from public libraries and school curricula. This annual event has become so successful that, although the American Library Association reported "460 recorded attempts to remove materials from libraries in 2009," a close examination suggests that many of these amounted to mere "challenges" -- written objections submitted to librarians or teachers by isolated crackpots or control freak parents with minimal chances of seeing their censorious desires fulfilled.

But book banning isn't the only form censorship takes, and schools and libraries aren't the only places where it happens. As reported in Publishers Weekly, the Texas Appeals Court last week heard an important but little-known case filed against Carla Main, author of "Bulldozed: 'Kelo,' Eminent Domain and the American Lust for Land," and her publisher, the conservative press Encounter Books. The plaintiff, developer H. Walker Royall, claims that Main has defamed him and wants her book yanked off the market and any future printings curtailed. Royall has also attempted to sue a newspaper that reviewed the book and even a law professor who provided a back-cover endorsement. (The latter case has already been dismissed.)

Main's book describes a long-standing and rancorous dispute over eminent domain seizures in the town of Freeport, Texas, and her defense is spearheaded by the Texas-based Institute for Justice, which describes itself as the "nation's only libertarian public interest law firm." While Main's plight may not tug as forcefully on the heartstrings as the idea of young people deprived of the right to read by fundamentalist fanatics, she and her publisher are nevertheless fighting an important battle.

At issue is whether, in Texas, books are entitled to the same First Amendment protections as "news" organizations. If the appeals court agrees that they are, the case will be prevented from proceeding to litigation, saving Main and her publisher from further legal expenses. According to P.W., Main's brief states that Royall doesn't contest the facts as she reports them, but objects to how she "characterizes the project and Royall's involvement." And while it may seem unlikely that he could ever prevail against her, chances are the costs of defending "Bulldozed" have by now far exceeded any income the book may have earned.

For a glimpse of how even baseless libel actions can end up suppressing speech, we have only to look at an article former publisher Dan Hind wrote for the Guardian last month. Hind edited the British editions of Eric Schlosser's "Fast Food Nation," Greg Palast's "The Best Democracy Money Can Buy" and Misha Glenny's "McMafia," among other important works of book-length investigative journalism.

British libel law is notoriously harsh -- so much so that when asked to contemplate the possibility of Facebook founder Mark Zuckerberg suing the makers of the film "The Social Network" for misrepresenting him, First Amendment lawyer Floyd Abrams told the New York Times, "He ought to sue in London, where the law is so very pro plaintiff and so very indifferent to what we consider to be free speech rights."

Abrams was being sardonic, but not fanciful. The practice he describes is called libel tourism, and it's been employed by the wealthy and powerful to stifle critics even when the critics' books weren't published in England. Saudi billionaire Sheikh Khalid bin Mahfouz used a British court to sue American author Rachel Ehrenfeld for libeling him in her book "Funding Evil," on the grounds that 23 copies of her book were sold in the U.K. via the Internet. Ehrenfeld, who refused to participate in the trial, was ordered to pay a 10,000-pound default judgment by the court.

Ehrenfeld's experience prompted the passage of anti-libel-tourism legislation on the state level, as well as the SPEECH Act (H.R. 2765), signed into law by President Obama in August. The new law prevents federal enforcement of foreign libel judgments in the U.S. if those judgments do not meet the tougher standards for libel here. However, it can't do much to help American authors and publishers with assets in the U.K., let alone British writers and publishers.

As Hind describes it, British libel law often makes the publication of books on current affairs prohibitively expensive. Even before the book is published, it must be exhaustively vetted by lawyers. (Vetting happens in the U.S. as well, of course, but it doesn't have to be anywhere near as rigorous.) While in the U.S. the burden of proof for libel is on the plaintiff (who must demonstrate that the defendant willfully made false statements with malicious intent), in the U.K., it's up to the defendant to demonstrate, using the sworn testimony of primary sources, that his or her claims are true. If you'd talked to Eric Schlosser about the misdeeds of your fast-food-company employer or given Misha Glenny important information about international organized crime, how would you feel about that? "The game," Hind writes, "is rigged to make it all but impossible to say anything substantial about any powerful individual or institution without running eye-watering risks."

Even when a libel case is almost certain to fail, defending a book and its author in court is costly. As a result, according to Hind, British publishers hesitate to take on books that seem likely to attract such suits, and in turn, writers hesitate, or are simply unable, to write them.

Banned Books Week has been such a success at calling attention to targeted books that in quite a few instances it has won them a wider circle of readers. As crucial as it is to continue to protect those books from would-be censors, we should be paying equal attention to any encroachment of libel and defamation litigation on authors' freedom to criticize people rich and powerful enough to dispatch a pack of lawyers at will. There's no more effective way to ban a book than to prevent it from being written in the first place.

Andrew Albanese for Publishers Weekly on the case against "Bulldozed."

P.W. on the signing of the SPEECH Act

Dan Hind for the Guardian on the speech-stifling effects of U.K. libel law.