The governor at the top of the GOP's hit list

If Deval Patrick loses in Massachusetts, the right will gloat that it's an omen for 2012 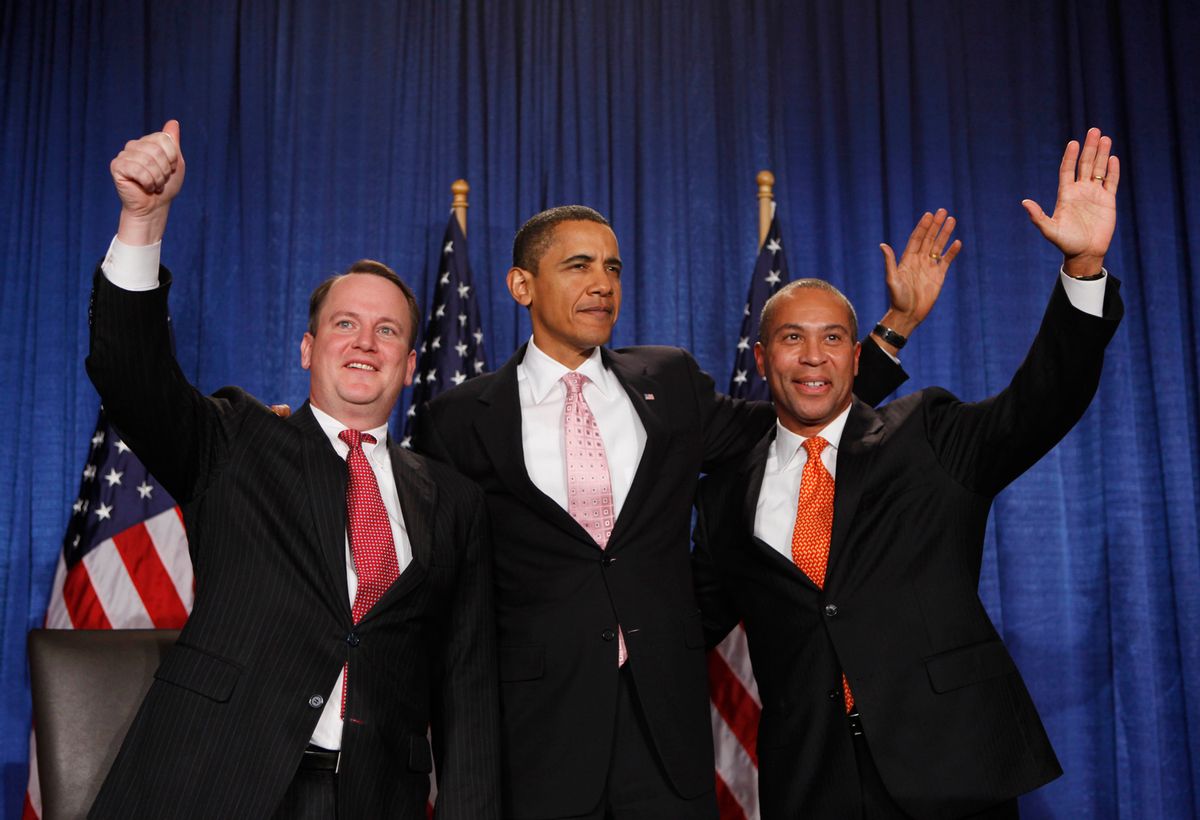 There are plenty of Democratic incumbents on the GOP's hit list, but in terms of symbolic significance, there are few they'd enjoy taking out more next month than Deval Patrick.

The logic is simple: Patrick, a trailblazing African-American politician who channeled his uplifting life story and soaring inspirational rhetoric (some of which Barack Obama borrowed in 2008) into an against-the-odds grass-roots triumph four years ago, invites easy and obvious comparisons to the current occupant of the White House. So if Patrick goes down this year (in Massachusetts, of all places), it will make for a priceless GOP talking point heading into 2012.

And, at least on paper, the task for Republicans should be just as simple. Patrick, after scoring a resounding landslide in 2006, crossed the public in the early days of his administration by giving his office a lavish redesign and (before thinking better of it) leasing a Cadillac as his official state vehicle. Fair or not, this helped erode Patrick's popularity, which never again approached the levels he enjoyed in the '06 campaign. And as the economy worsened, his numbers only ebbed further. In the most recent poll, his approval rating sits at just 40 percent.

Add in the practical effect of the Democrats' monopoly on Washington power -- which has made swing voters who spent the previous decade-and-a-half shunning Republican candidates suddenly receptive to voting for the GOP, simply as a protest vehicle -- and the presence of an unusually marketable Republican challenger, a Weld-ish moderate named Charlie Baker, and Patrick should easily be a goner.

But he's not -- at least, not yet. In just about every poll this year, Patrick has enjoyed a small but clear advantage over Baker, although the most recent poll for the Boston Globe showed Baker essentially drawing even. This has provided the White House and national Democrats with a rare bit of encouragement this year. A Patrick win in Massachusetts won't even begin to make up for the deep House and Senate losses the party expects, but it would deny Republicans a symbolic victory they badly crave. Thus, Tuesday's news that Obama, who is also personally close to Patrick, will campaign for the embattled governor on Oct. 16 is hardly surprising.

But will it be enough?

After all, a last-minute campaign swing from the president back in January did nothing to save Martha Coakley in the state's special election. And, more broadly, there's very little evidence that presidential campaigning ever actually persuades voters in state elections -- especially when the president isn't on the ballot. (That said, Obama's decision to come to Massachusetts does call to mind 1994, the last time the national mood was this poisoned against Democrats; even then, Bill Clinton enjoyed a 60 percent approval rating in Massachusetts and actively campaigned in the state for Ted Kennedy. Obama's current approval rating in the Bay State is 54 percent.)

The real decisive factor in the race probably doesn't have anything to do with Obama, but depends on the fate of Tim Cahill, the state treasurer who left the Democratic Party last year to wage an independent campaign for governor. When he first jumped in, Cahill fared well in polls, even running ahead of Baker in a few of them. But his support has dropped markedly (this also happened with Christy Mihos, the self-funding independent who started strong only to finish with 7 percent in the '06 race); the same Globe poll that put Patrick ahead of Baker by a statistically insignificant 1 point (35 to 34 percent) had Cahill far back with 11 percent.

Now Republicans are turning up the heat to drive Cahill from the race for good. If he hovers around 10 percent through Election Day, they figure, he'll deprive Baker of just enough anti-Patrick votes to save Patrick. But if they can get him out and force an authentic one-on-one race, they'll win. This blunt calculation is seemingly at the heart of a bizarre chain of events in the last few weeks. First John Weaver, the old John McCain hand who had been advising Cahill, quit and threw his support behind Baker. Then, within 24 hours, Cahill's campaign manager quit too. And then, last weekend, Cahill's handpicked running mate, a former Republican state legislator named Paul Loscocco, announced that he was dropping out and endorsed Baker.

For now, this hasn't budged Cahill, who is pledging to stay in the race. And Loscocco's move could actually backfire on Baker, who has been forced to deny rampant speculation that he promised Loscocco a job or made some other kind of backroom arrangement. But whatever deals were or weren't cut, it's clear that Republicans, who have already poured big bucks into negative ads against Cahill, are increasingly frantic to marginalize Cahill.

There really isn't a good parallel in modern Massachusetts history for this kind of campaign. The last time the political climate was this bad for a sitting governor's party was in '06, but Mitt Romney had the good sense not to seek a second term that year (even though he pretended that he would have won if he'd tried). Before that, it was 1990, but Michael Dukakis, like Romney, also declined to run again. To find a decent precedent, you probably have to go back to 1974, the year of the Watergate backlash, when Dukakis knocked off liberal Republican Gov. Frank Sargent by 11 points. But even that's not a strong parallel, since Sargent, as a Republican, had less of a base to fall back on than Patrick now enjoys -- nor was there a credible independent candidate threatening to play spoiler.

For the White House, the bottom line may be a harsh one: As much as they want Patrick to survive, there's not much they can do to help him -- except pray for Cahill to stay in the mix.