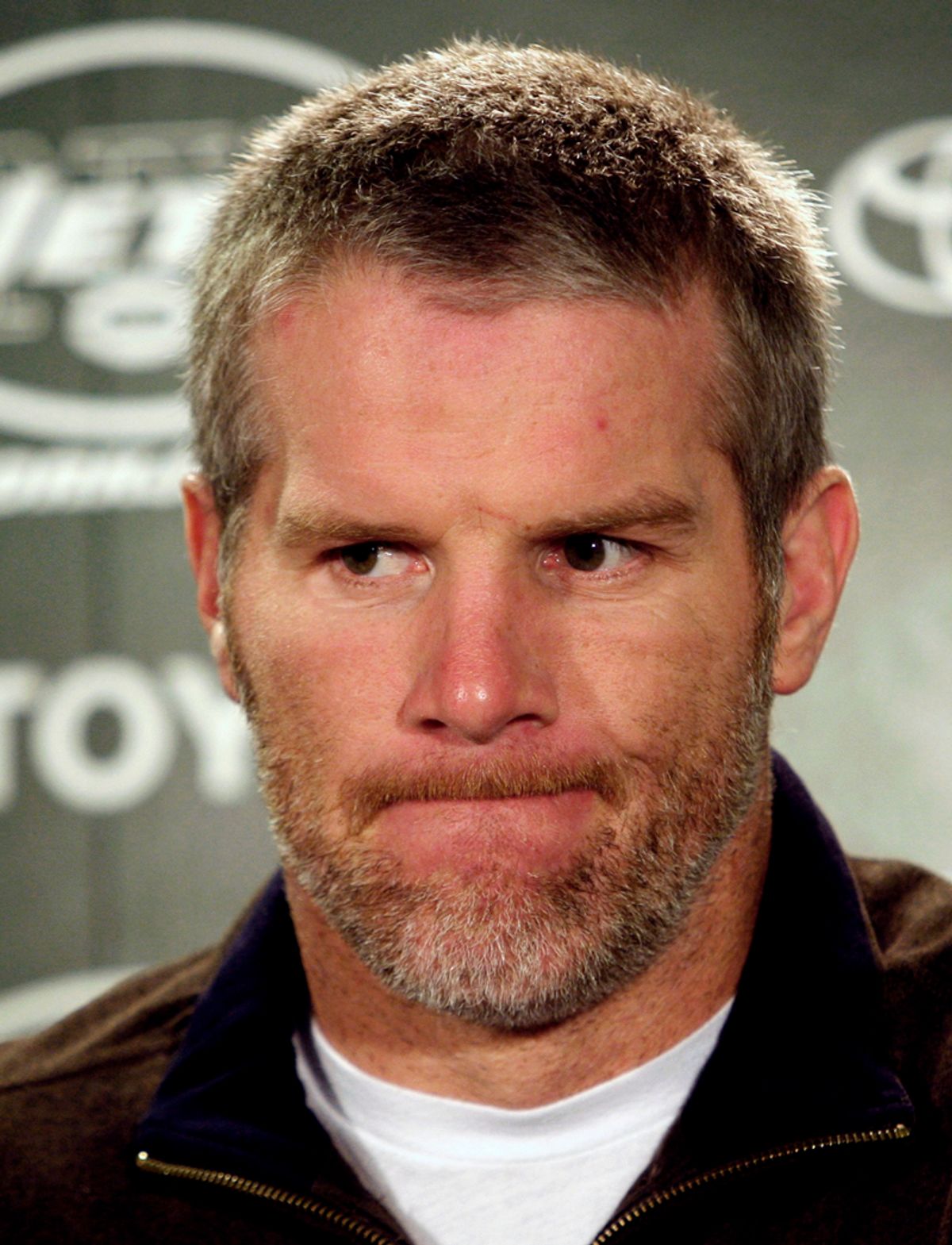 With all the excitement Thursday, you'd have thought New Year's Eve had come early. Business Insider  even posted a countdown clock. And sure enough, shortly before 2 p.m., balls did indeed drop, and the world was Rockin' With Dick. In the most highly anticipated reveal in at least days, Deadspin published photos of what may be the penis of legendary quarterback Brett Favre.

Does the little bishop of a man who has played in two Super Bowls shine brightly from within, like the briefcase in "Pulp Fiction"? Does a chorus of angels sing every time an NFL MVP whips out his junk? That, perhaps, was the question burning in the minds of the curious voyeurs who flocked to Deadspin at the appointed hour to feast their eyes on the promised vision of what only a few million lucky women in the world have ever seen: the shlong of a professional athlete.

As Deadspin unveiled the goods, it first treated its visitors to a tidy recap of how we all wound up furiously refreshing our browsers in the middle of a Thursday afternoon in the first place. To review: Two years ago, Jets in-house reporter Jenn Sterger found herself in Favre's orbit, and, allegedly, struck his fancy. What transpired next involved a strange e-mail pursuit via MySpace under the pseudonym "Screaming Lord Byron," cryptic phone messages and, eventually -- as everything involving cellphones always does -- the transmission of blurry images of someone's genitals.

Back in August, Deadspin editor A.J. Daulerio first wrote that Sterger had revealed all of this to him, but balked at going public with the story; indeed, explicitly requested Deadspin keep a lid on it. Daulerio had no such hesitation, and told her, "Not trying to dick you over, but there was no way I was going to sit on it forever, either."

Which brings us to today, and those long-awaited voice mails and photos, which Deadspin "acquired from a third party." Of course, there's no guarantee that the Favre-sounding voice telling Sterger "You're probably caller IDing me. But if you can make it, it'd be great," is the man himself. And those three hotly anticipated photos, which are very specifically zeroed in on one body part, could be of anybody. In one photo, which clearly took a little conceptualizing and possibly workshopping, the hallowed member stands proudly erect, alone and unidentified in front of a wrinkled sheet, like it's auditioning for Jenn Sterger's affections. It's not like it's wearing a Super Bowl ring or anything. But it's noteworthy that in the first and third photos, which future generations will no doubt pore over with a Warren Commission-like scrutiny, the hand gripping said body part does sport a thick wristwatch that resembles Favre's.

Only those of us who have either played for the Vikings or personally encountered the equipment of a man who has can say for certain whether those pictures – which, by the way, do not make a very compelling sales pitch, if you know what I mean -- are of Favre. But what's fascinating has been the eagerness to look anyway -- the avalanche of tweets, the outpouring of what one Deadspin reader referred to as "commentgasm" over the whole thing. (Most genius response: "HE'S LIKE A KID DOWN THERE!") Maybe it's the naughty thrill of seeing something that was supposed to be private -- although I'd suggest to the gentleman who sent those images, whoever he is, that sending cellphone pics of what's under your jock is not the best way to maintain your boundaries. Maybe it's a curious longing to know if the great ones are great all over. Or maybe Americans are just in general more wang crazed than a Bhutan phallus festival. Whatever the reason, Deadspin sure knows what the people want, teasing earlier in the day about how many minutes were left until "Dong Time."

As Favre, who last month told USA Today, "It's a media frenzy world and nothing goes untouched or un-talked about," quietly waits for the furor over his penis to die down, the heavily compensated pitchman/football player will likely not have to endure the public walk of shame that Tiger Woods did. The evidence so far is too easily disputed, the key participants too unwilling. And that won't stop anybody from wildly clicking away at photos that might be a famous man's golden baby maker. But to save anyone any possible suspense, I can report that I've seen it. And you know what it looks like? A penis.