The chatter about Clinton replacing Joe Biden in 2012 is nonsense. But 2016? 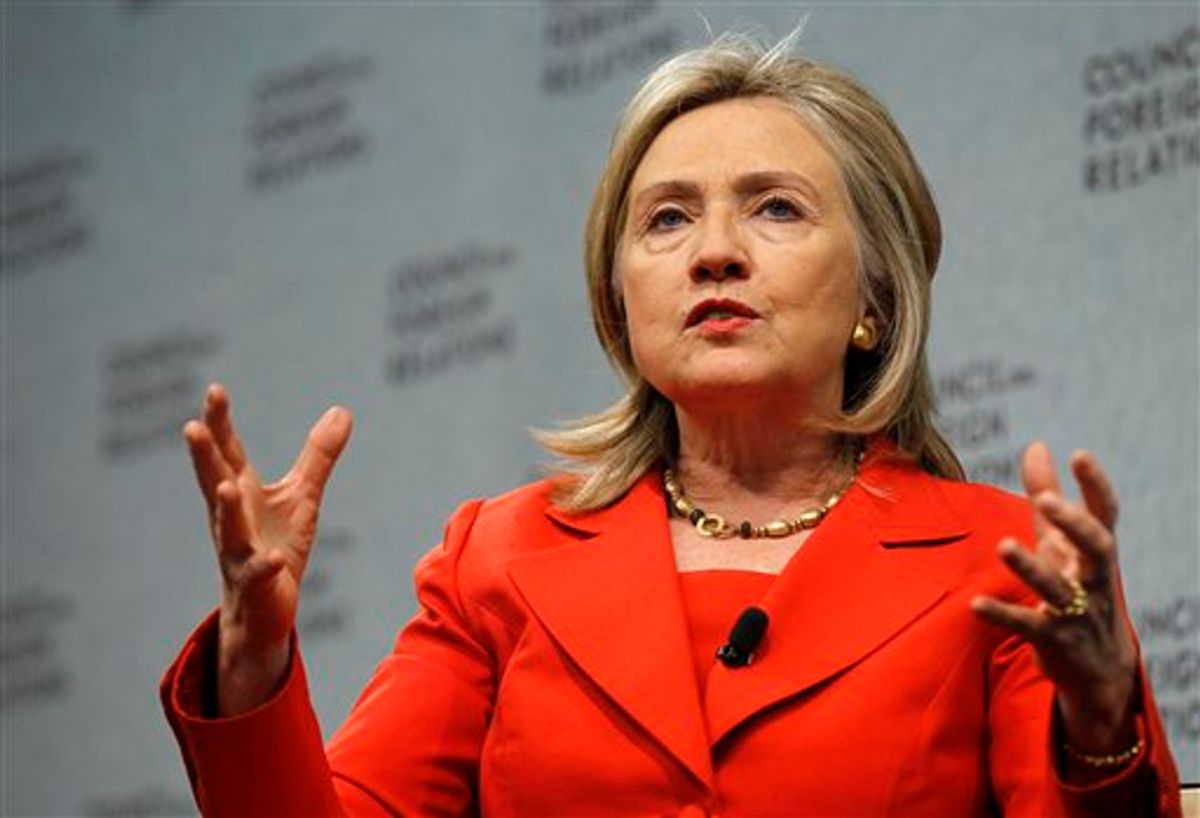 FILE - In this Sept. 8, 2010 file photo, Secretary of State Hillary Rodham Clinton speaks at the Council on Foreign Relations in Washington. With tempered optimism, Clinton is leaping back into Israeli-Palestinian negotiations that she says may be the last chance for peace.(AP Photo/Alex Brandon, File) (AP)
--

On Tuesday, Bob Woodward announced that a Hillary Clinton-Joe Biden job switch for 2012 was "on the table," immediately triggering a fresh round of news stories, columns, blog posts and cable news segments on the subject.

There's absolutely zero reason to believe, or even suspect, that there's anything to what Woodward was saying (I've outlined the reasons before), but there's really no point in getting too worked up about this: Hillary's ambition (and the Hillary-Obama relationship) is just too irresistible a topic for the media; consider yourself sentenced to many more flare-ups like this between now and the 2012 Democratic convention (where Joe Biden, barring a scandal or some medical issue, will be renominated for a second term as vice-president by acclimation).

Still, this week's round of stories did produce one item that sounds about right: Politico's report today that Hillary's old political team is thinking in terms of 2016, not 2012.

This has always made the most sense, ever since Hillary ended her presidential campaign in June 2008. She will turn 69 in October 2016 -- younger than four of the eight most recent Republican presidential nominees. Age wouldn't be an issue.

And while it's ridiculously early to assess the Democratic field, it's hard to imagine Hillary's celebrity fading much between now and then, even if she were to step down as secretary of state after 2012. In 2008, she had the misfortune of running against a once-in-a-lifetime opponent whose personal story, oratory, history-making potential, and grass-roots army allowed him to compete on the same level as Hillary. More than likely, that won't be the case in 2016. Think of how Hillary would have matched up against John Edwards, Mark Warner, Bill Richardson or any of the other second-tier '08 contenders who were suffocated by Obama's presence. To varying degrees, they all might have given her fits and won some primaries and caucuses, but it's likely she would have emerged the winner. In '16, she'd probably get to play the role she always thought she would in '08.

In fact, Biden staying on as V.P. is actually in Hillary's best interests. Look at it this way: If Obama is facing a perilous reelection campaign in '12 (the kind that, under the logic presented by Woodward and others, would make him want to put Hillary on the ticket), the downside to Hillary would be huge. In the eyes of the media and plenty of Democrats, the fate of the ticket would be in her hands, and a loss would be blamed on her. This would be completely unfair, of course, since running mates are basically inconsequential in general elections, but the damage to her image -- and her standing for '16 -- would be considerable. By staying off the ticket, Hillary would be spared any fallout from an Obama loss.

At the same time, there'd also be little threat to her from Biden being reelected with Obama. He's four years older than her and will turn 74 at the end of '16. It's not written anywhere that 74 is too old to be sworn in as president (Ronald Reagan actually turned 74 a month after his second inaugural), but age would be a bigger factor for Biden if he ran in '16 than for Hillary. By all measures, Biden has played a consequential role in the Obama administration; but unlike, say, George H.W. Bush under Reagan or Al Gore under Bill Clinton, he's not taking steps now to establish himself as his boss's heir apparent; in this sense, his vice-presidency is more like Dick Cheney's. And even if Biden were to begin making moves to position himself for '16, it's not hard to see a repeat of 1952, when Alben Barkley, Harry Truman's 74-year-old V.P., took last-minute steps to secure the Democratic nomination -- only to be hastily rebuffed.