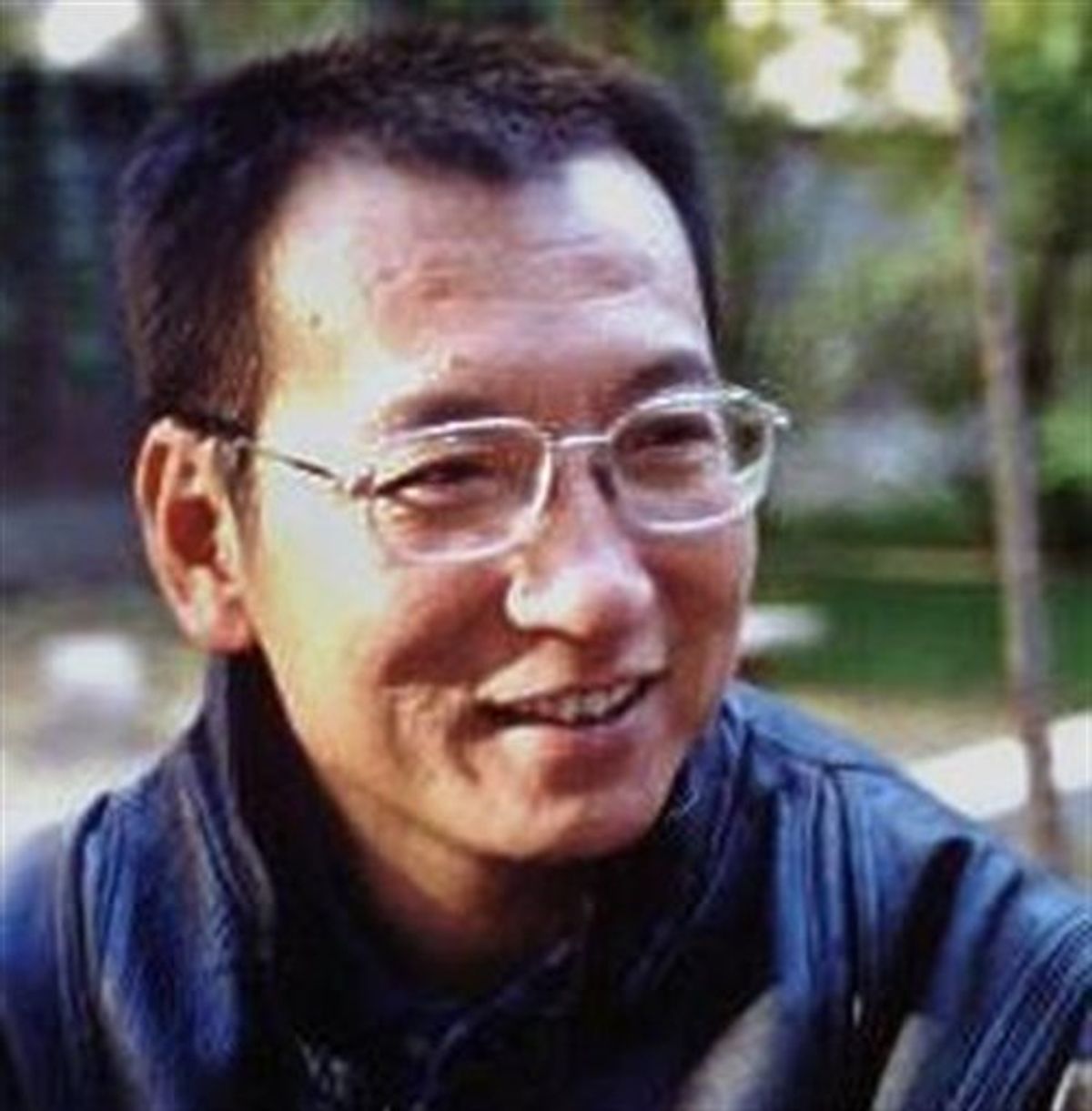 Imprisoned Chinese dissident Liu Xiaobo won the 2010 Nobel Peace Prize on Friday for using nonviolence to demand fundamental human rights in his homeland. The award ignited a furious response from China, which accused the Norwegian Nobel Committee of violating its own principles by honoring "a criminal."

Chinese state media immediately blacked out the news and Chinese government censors blocked Nobel Prize reports from Internet websites. China declared the decision would harm its relations with Norway -- and the Nordic country responded that was a petty thing for a world power to do.

This year's peace prize followed a long tradition of honoring dissidents around the world and was the first Nobel for China's dissident community since it resurfaced after the Communists launched economic but not political reforms three decades ago.

Liu, 54, was sentenced last year to 11 years in prison for subversion. The Nobel committee said he was the first to be honored while still in prison, although other Nobel winners have been under house arrest or imprisoned before the prize.

The Nobel committee praised Liu's pacifist approach, ignoring threats by Chinese diplomats even before the announcement that such a decision would result in strained ties with Norway. Liu has been an ardent advocate for peaceful, gradual political change rather than confrontation with the government, unlike others in China's highly fractured and persecuted dissident community.

The Nobel committee cited Liu's participation in the Tiananmen Square protests in Beijing in 1989 and the Charter 08 document he recently co-authored, which called for greater freedom in China and an end to the Communist Party's political dominance.

Chinese authorities would not allow access to Liu on Friday.

His wife, however, expressed joy at the news. Surrounded by police at their Beijing apartment, Liu Xia was not allowed out to meet reporters. Instead she gave brief remarks by phone and text message, saying she was happy and that she planned to go Saturday to deliver the news to Liu at the prison, 300 miles (500 kilometers) away.

Hong Kong Cable Television quoted her in a Twitter message as saying that Liu will draw encouragement from the award and she hoped to go to Norway to collect the prize if he could not.

"I believe that after the award, more people will put pressure on the Chinese side," the message quoted her as saying.

It was not clear if Liu himself had been told about the Nobel.

China's Foreign Ministry lashed out at the Nobel decision, saying the award should been used instead to promote international friendship and disarmament.

"Liu Xiaobo is a criminal who has been sentenced by Chinese judicial departments for violating Chinese law," the statement said. Honoring him "runs completely counter to the principle of the prize and is also a blasphemy to the peace prize."

It said the decision would damage bilateral relations between China and Norway.

In China, broadcasts of the announcement by CNN were blacked out. Popular Internet sites removed coverage of the Nobel prizes, placed prominently in recent days for the science awards. Messages about "Xiaobo" to Sina Microblog, a Twitter-like service run by Internet portal Sina.com, were quickly deleted. Attempts to send mobile text messages with the Chinese characters for Liu Xiaobo failed.

The Nobel committee said China, as a growing economic and political power, needed to take more responsibility to protect the rights of its citizens.

"China has become a big power in economic terms as well as political terms, and it is normal that big powers should be under criticism," prize committee chairman Thorbjoern Jagland said, calling Liu (LEE-o SHAo-boh) a symbol for the fight for human rights in China.

More than a dozen friends and supporters of Liu gathered near the entrance to Ditan Park in central Beijing, holding up placards congratulating Liu. They shouted "Long Live Freedom of Speech, Long Live Democracy" and wore yellow ribbons on their clothes to signify, they said, their wish that he be freed.

The small demonstration, initially undisturbed by police, pointed out the troubling status of China's dissident community. Liu is almost unknown in China except among political activists. Passers-by on foot and bike did not stop, ignoring the demonstration.

Norwegian Prime Minister Jens Stoltenberg told national broadcaster NRK he saw no grounds for China to punish Norway as a country for the award.

"I think that would be negative for China's reputation in the world, if they chose to do that," Stoltenberg said.

Several previous peace laureates have been unable to accept the prize in person because of restrictions imposed by their governments, including Sakharov and Walesa. Geir Lundestad, the non-voting secretary of the Nobel committee, said Liu was the only laureate who was honored while being locked up in a prison.

Suu Kyi, who was awarded the 1991 prize and has been detained 15 of the past 21 years, is due to be released from house arrest Nov. 13, a week after Myanmar's first elections in two decades. Suu Kyi's political party won the last elections in 1990 but the ruling junta never allowed it to take power.

"China is in breach of several international agreements to which it is a signatory, as well as of its own provisions concerning political rights," it said, citing an article in China's constitution about freedom of speech and assembly. "In practice, these freedoms have proved to be distinctly curtailed for China's citizens."

The Charter 08 document that Liu co-authored was an intentional echo of Charter 77, the famous call for human rights in then-Czechoslovakia that led to the 1989 Velvet Revolution that swept away communist rule.

"The democratization of Chinese politics can be put off no longer," Charter 08 says.

Thousands of Chinese signed Charter 08, and the Communist Party took the document as a direct challenge.

Police arrested Liu hours before Charter 08 was due to be released in December 2008. Given a brief trial last Christmas Day, Liu was convicted of subversion for writing Charter 08 and other political tracts and sentenced to 11 years in prison.

"Through the severe punishment meted out to him, Liu has become the foremost symbol of this wide-ranging struggle for human rights in China," the award citation said.

Jagland told The Associated Press that the committee had not tried to reach the imprisoned laureate or his wife, but they would contact the Chinese Embassy in Oslo.

In a year with a record 237 nominations for the peace prize, Liu had been considered a favorite, with open support from winners Archbishop Desmond Tutu, the Tibetan spiritual leader the Dalai Lama and others.

When the Tibet-born Dalai Lama won the peace prize in 1989, both the Chinese government and some of the public were angry -- the exiled Buddhist leader was endlessly vilified in official propaganda as a traitor for his calls for more autonomy for Tibet.

The Dalai Lama on Friday issued his public congratulations to Liu.

"I would like to take this opportunity to renew my call to the government of China to release Liu Xiaobo and other prisoners of conscience who have been imprisoned for exercising their freedom of expression" the spiritual leader said.

The son of a soldier, Liu joined China's first wave of university students in the mid-1970s after the chaotic decade of the Cultural Revolution.

Liu's writing first took a political turn in 1988, when he became a visiting scholar in Oslo -- his first time outside China.

Liu cut short a visiting scholar stint at Columbia University months later to join the Tiananmen Square protests in Beijing in 1989. He and three other older activists famously persuaded students to peacefully leave the square hours before the deadly June 4 crackdown.

Liu went to prison after the crackdown and was released in early 1991 because he had repented and "performed major meritorious services," state media said at the time, without elaborating.

Still, five years later Liu was sent to a re-education camp for three years for co-writing an open letter that demanded the impeachment of then-President Jiang Zemin.

The 2010 Nobel announcements started Monday with the medicine award going to British professor Robert Edwards for fertility research that led to the first test tube baby.

The last of the 2010 awards -- the economics prize -- will be announced next Monday.

Swedish industrialist Alfred Nobel, the inventor of dynamite, established the awards in his 1895 will. He left only vague instructions, dedicating the peace prize to people who have worked for "fraternity between nations, for the abolition or reduction of standing armies and for the holding and promotion of peace congresses."