"It's Kind of a Funny Story": Zach Galifianakis' dramatic breakthrough 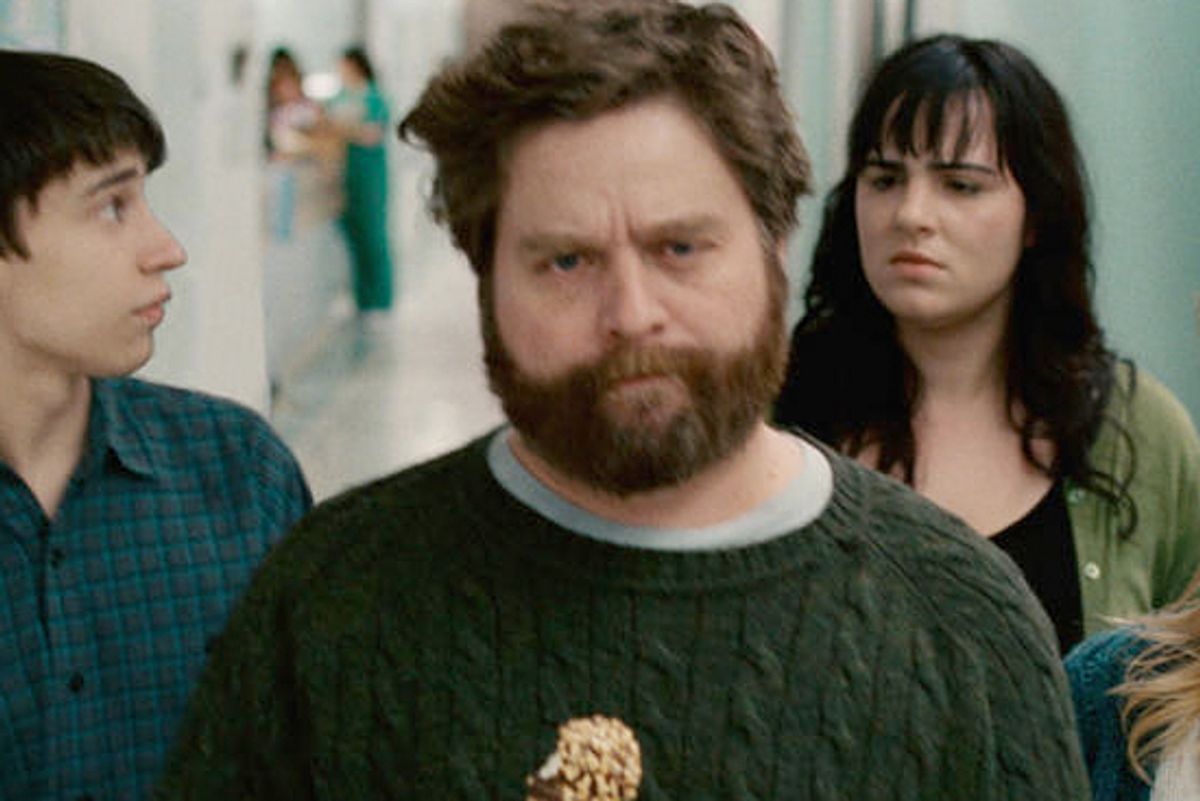 Zach Galifianakis in "It's Kind of a Funny Story"
--

It's such a predictable film-critic move to heap praise on a comic actor for taking on a "serious" dramatic role -- it presumes, for one thing, that playing comedy is somehow easier -- but that won't stop me from telling you to catch burgeoning comedy star Zach Galifianakis in "It's Kind of a Funny Story." He plays a central and ambiguous supporting role in this likable yarn about a middle-class New York teenager in a psychiatric hospital, which was adapted from Ned Vizzini's novel by Anna Boden and Ryan Fleck, the indie writing-directing duo behind "Half Nelson" and "Sugar."

I caught the movie recently at the Toronto International Film Festival, where some cinephile types seemed disappointed; "Funny Story" is lighter and sweeter in tone than Boden and Fleck's previous movies, and lacks any film-school formalist innovations. "We've had the experience of having two critically acclaimed movies," cracks Fleck, "and now we want to make one that's not so critically acclaimed." He's mostly kidding, but maybe not entirely. Adds Boden: "If you're looking for 'Half Nelson 2,' you won't find it here."

Taken on its own terms, "It's Kind of a Funny Story" is a delicately balanced work, rich in spirit but never melodramatic, and full of sharp observations and lovely performances. (Not to mention a totally irresistible, John Hughes-inspired musical number, featuring the Bowie-Queen hit "Under Pressure.") Viewers are likelier to identify with Keir Gilchrist and Emma Roberts, as the attractive young couple who meet in this universe of damaged people and begin to understand how fortunate they really are. But it's the supremely deadpan tragicomic performance by Galifianakis that gives the movie its heart.

When Craig (Gilchrist), a stressed-out Brooklyn, N.Y., high school student, has one too many suicidal fantasies and checks himself into a locked psychiatric unit, he comes under the wing of Bobby, who comes off at first as another one of Galifianakis' funny-sad clown characters: supremely overconfident, lacking in self-knowledge, unable to comb his hair correctly. Compared to some people on the ward, Bobby seems perfectly normal. He talks in English sentences, he's oriented in time and place, he harbors no grandiose delusions. He knows the doctors and nurses and has earned their trust; he smuggles Craig off the ward to go shoot hoops and buy junk food.

Incrementally, through a world of small moments and gestures, Galifianakis begins to convey hints of the nearly bottomless despair and self-hatred that lies below Bobby's bonhomie -- and it's like seeing his supposedly amusing characters in "The Hangover" or "Dinner for Schmucks" from a new angle. It's a brilliant dramatic performance precisely because it avoids huge dramatic moments, and relies almost entirely on wit and understatement to convey a painful emotional condition. By the time we learn how serious Bobby's life situation is, we almost don't need to know. That competent, doofusy facade is costing him immensely, and his future -- as in, whether or not to keep on living -- is very much shrouded in doubt.

"We were excited to find out what Zach could do with this kind of role," Anna Boden told me in Toronto. "I think we had a pretty good idea that he'd be able to pull it off after meeting with him and seeing, first of all, how down he was to try something different and, second of all, how grounded and warm and kind and charming a person he is. He ended up really knocking it out of the park, and doing things that went beyond our expectations. Every day, we were excited to see what he was doing on the set, with the dramatic elements as well as the comedic ones."

If "It's Kind of a Funny Story" has a much broader potential audience than anything Boden and Fleck have made before, it might also attract the smallest audience of Galifianakis' movie career. That might be a good thing for all parties. The filmmakers badly need to get out of the dwindling indie ghetto, and "Funny Story" might be one of those rare films that can please teenagers and their parents, date-night moviegoers and art-house film buffs. (I thoroughly recommend it to other urban parents, negotiating the ridiculous extremes of the big-city public schools.) Some people may feel this is a trivial or lightweight teen film, but I strongly disagree, and it's Zach Galifianakis, playing a guy who seems to contain both Hamlet and King Lear's Fool in one body, who lends it gravity and a dash of darkness.

"It's Kind of a Funny Story" is now showing in roughly 500 theaters nationwide, with more likely to follow.