HBO depicts the crime boss as a murderous, charming thug. An expert explains why he's the best portrayal yet 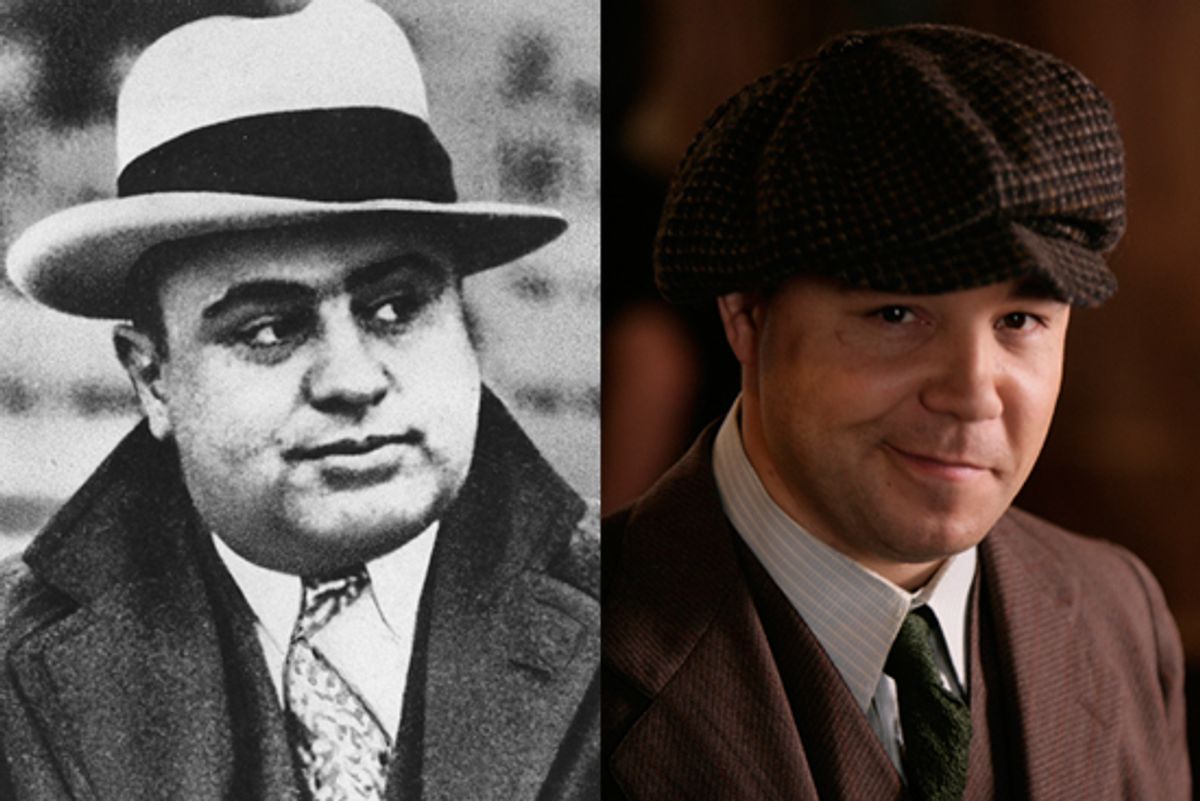 "Boardwalk Empire," HBO's stunning period drama, tells a tale that's largely true. Some of the show's characters are fictional, but many are based on real gangsters and politicians from the Prohibition era, the most recognizable being Al Capone.

Capone, played by English actor Stephen Graham, is introduced in the first episode, though for an epically violent gangster, he sure makes a casual entrance. Jimmy Darmody, the up-and-coming lackey of Atlantic City treasurer "Nucky" Thompson, strolls up to a short guy leaning against a dark car in the nighttime. They strike up a conversation about their time in the war. "What's your name?" Darmody asks. "Al," the short guy replies. "Al Capone."

It's a jarring moment. The series is about Prohibition-era Atlantic City, and Capone's a Chicago guy. Yet the real-life Capone, just like the myriad characters in "Boardwalk Empire," owes his ascendancy to Prohibition and the boundless profits of bootlegging, a national business that introduced a new sophistication to organized crime. Capone is the paradigm of the small-time gangster who made it big on illegal liquor. When Prohibition began in 1920, he was a small fish, just one of Johnny Torrio's many employees. But by 1925, Torrio would retire and leave Capone in charge of the Chicago Outfit, a criminal empire built on Prohibition money.

Creator Terence Winter (of "Sopranos" fame) adapted the screenplay from Nelson Johnson's book "Boardwalk Empire: The Birth, High Times, and Corruption of Atlantic City." It argues that Prohibition created Atlantic City; it created rich mobsters and two-faced politicians and unpredictable criminal masterminds like Al Capone. As played by the rambunctious Graham, Capone is volatile and menacing; he bursts Darmody's eardrum just for fun (and Darmody's his friend -- don't ask what he does to snooping journalists). But we also see Capone as we've never seen him before: a jocular little guy who's just trying to get his foot in the door.

Is HBO's portrayal of the famed gangster accurate? To find out, we consulted Jonathan Eig, author of this year's new biography "Get Capone: the True Story of Al Capone." Eig spoke with us over the phone from his home in Chicago.

What's your overall impression? Was Stephen Graham a good choice for the role?

He's great. I think he's maybe the best Capone I've ever seen. And that's including De Niro, obviously. De Niro was over the top in "The Untouchables." Stephen Graham looks like Capone a little bit, and he has the energy and the charisma. Most people don't portray Capone as being charismatic or likable in any way, but Stephen Graham is fun and funny. He's a little scary, too, but he's funny on purpose sometimes, which was true of Capone. Capone was somebody you could actually pal around with if you're on his good side, and all that comes across really nicely.

What did they get wrong?

My one complaint is that Stephen Graham is too short. He's way too short. I really have a hard time with that. Graham does have a nice physical presence, and you get the impression that he can be tough. Certainly Graham's Capone is capable of violence and acts out really savagely. But Capone was a big guy. Just him standing in the front door of the Four Deuces [the nightclub where "Boardwalk's" Capone works] was an intimidation, and I don't get that with Stephen Graham.

How tall was Capone? IMDB lists Graham at 5-foot-5.

In the series premiere, Capone is part of a big shoot-out in the forest. Did anything like that really happen near Atlantic City?

That scene in the woods, as far as I can tell, was completely fictional. I don't even think Capone went to Atlantic City at all during that point in his career, so they took artistic license with that. On the other hand, the murder of Jim Colosimo in the restaurant, at the very end of the first episode, they show the blood spilling out on the white tiles, and that part is accurate. It's not proven, but there's a very good chance that Frankie Yale killed Colosimo, and it went down just like they showed it. It's great the way they mix real events and invented ones. This makes the invented events feel more authentic, and the series doesn't make any claims of historical accuracy, so I have no problem with it at all. For the aficionados, it must be fun to see these real-life events portrayed so accurately, and then coupled with this are these entirely fictionalized events. To me that makes the story more compelling.

Capone is introduced in the show as being a driver. The year is 1920, and by the end of the episode Capone is seizing opportunities for power. Does the timing of this match up?

It's pretty close. In 1920 Capone was nothing more than a driver, a bodyguard and a bouncer. I would guess he was still even washing dishes at that point. He was very low on the totem pole, but he was attached to the right guy, and that was Johnny Torrio. It's clear that Capone was working for Torrio and had a great opportunity to make money along with Torrio, but it's not clear if Capone really had ambitions to take over. "Boardwalk Empire" does a pretty good job of showing that Capone is not necessarily cut out to be the boss. He's hot-headed, he's immature, and he's not exactly Machiavellian in his planning. Capone is flying by the seat of his pants, and you can make a good case, both in the show and in reality, that Capone wasn't cut out for leadership. He gets to his position of power almost accidentally.

In "Boardwalk Empire," Capone is involved in a lot of random acts of violence. Would he really have gotten away with this stuff so early on in his career?

He did get away with killing some people early in his career, in a rage. There's good evidence of this, and it seems plausible, because he wasn't on the public radar yet, so he could get away with these rage-fueled acts of violence. In 1920, and even by '23 or '24, he's not really well known in Chicago, so he was able to commit crimes and then disappear back into the mist of the underworld.

Capone's mentor, Johnny Torrio, is represented in the show as an aging guy who's ready to let Capone take control. Is this accurate?

I don't think they quite captured Torrio's character. He was more sophisticated than the character in the show. He was more careful about his image. But that's quibbling. Overall, they got him right. Torrio was the guy who needs to bump off Colosimo in order to take over in Chicago, and he's torn between wanting to make peace with the other gangs and realizing that there's enough money for everybody. Torrio was more of a pacifist than Capone. He was always trying to teach Capone to be a diplomat. But you don't get the sense of Torrio as a mentor in the show.

In "Boardwalk Empire," Capone bartends at a place called the Four Deuces in Chicago. Was that a real bar?

It was. They got the feel of the Four Deuces right. It had a brothel upstairs and drinking downstairs. In general, the show captures the bars and the brothels really nicely. There were a couple of things that weren't correct in the Chicago scenes. [SPOILER ALERT] In Episode 6, they show Capone in an apartment with his wife and son and mother. His mother was not yet living in Chicago at that time, and they didn't get his wife's personality right at all, but it was still a neat scene.

Why are you so interested in Capone? Why is he the most famous of all gangsters?

In large part it's because he loved publicity. The other gangsters, even the ones you see in the show, like Lucky Luciano and Arnold Rothstein, they didn't embrace the celebrity, which seems obvious if you're involved in all this illegal activity. You should probably keep quiet about it. But Capone couldn't do it. He was a gabber. He was such a gregarious guy that when the reporters came around, he just wouldn't shut up. So he became a celebrity, and he really believed he could get away with it. I love the scene in "Boardwalk Empire" when he gets his first fancy suit. You can see that he begins to think highly of himself. Only during Prohibition could somebody doing this work begin to think of themselves as being high-class and having a high profile. That's really the key for Capone, and that's why we're so fascinated with him today. He wasn't shy about his illegal activities. He bragged about them.

How do you think other biographers have misrepresented Capone? Why did you write your book?

I felt like the Capone story needed more context. He was becoming like a mythological figure. The movie image had taken over, and people really believed that he was De Niro, that he was this psychopath. People lost sight of the fact that he was created by Prohibition. He would have been nothing but a two-bit thug if not for Prohibition. I wanted to explain how he got to this position of power, and I wanted to put this within the context of the '20s, and how the '20s made people like Capone possible. "Boardwalk Empire" very quickly and precisely illustrated the effects of Prohibition, and that's what I wanted to do with the book. That's why I thought the Capone story was worth telling again. Prohibition completely changed the fabric of our country. You had these criminals who were base characters, horrible men, but they provided a service that even stand-up citizens were interested in. All the moral values got turned inside out, and that's what made Prohibition so fascinating.