Bad weather, growing demand and flat corn harvest yields all add up to one thing: That steak is going to cost you 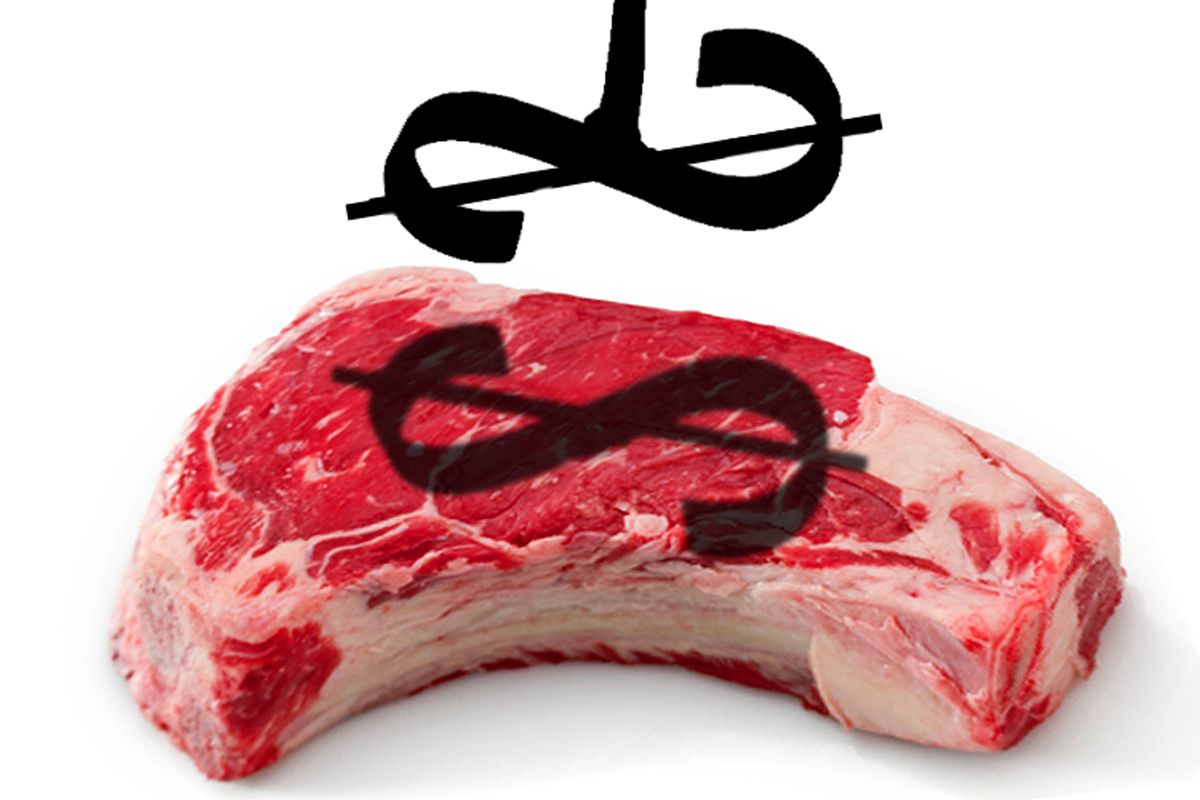 The 2010 U.S. corn harvest will be the third largest in history, behind only 2007 and 2009. But that's not big enough. When the United States Department of Agriculture announced last week that farmers would produce only 12.7 billion bushels of corn this year, down 4 percent from its September estimate, corn future prices exploded upward by the maximum allowable amount in one day, and meat prices are sure to head in the same direction. Bloomberg reports that retail prices for pork and beef are already at their highest point since the 1980s.

It's only going to get worse. It's very difficult to see how the fundamentals pushing agricultural prices up are going to change in any significant way. The consequences of surging global demand for meat, largely propelled by China -- where meat consumption has more than doubled in the last decade and a half -- combined with the diversion of as much of a third of the U.S. corn crop to ethanol, are inescapable.

Abdolreza Abbassian, senior grain economist at the UN Food and Agriculture Organization in Rome, says that "anything other than a record crop" is now a problem because of the need to meet rising food, livestock and ethanol fuel demand.

"We need a record crop every year. If not, we are in trouble," he says.

A record crop every year! Just how feasible is that?

From the same FT article:

"The thrust from Washington policymakers, the USDA and the biofuels forces has been that improved genetics and improvement in yields are going to save the day in terms of supplying the growth in demand,"says Rich Feltes, vice-president at brokers RJ O'Brien. "But the events of 2010 call that into question."

One such event, unmentioned in the article, is the failure of Monsanto's newest generation of genetically modified offerings to significantly boost yields. As the New York Times' Andrew Pollack reported one week ago, "this year's harvest showed that Monsanto's newest product, SmartStax corn, which contains eight inserted genes, was providing yields no higher than the company's less expensive corn, which contains only three foreign genes."

Another such event is the increasing likelihood of bad weather. Varying combinations of heat, drought and heavy rains disrupted grain harvests across the world in 2010. If the consensus conclusion of the majority of the world's climate scientists is correct, the frequency of extreme weather events will increase as global temperatures continue to rise. Sure, it's possible that warming temperatures will open new territory to farming, but the challenge of accomplishing record harvests while adapting to changing weather conditions will be formidable.

The equation is challenging: Add global warming and plateauing yields plus rising demand plus biofuels together and what do you get? Some very expensive filet mignon.