The bankruptcy of New Democrat ideology 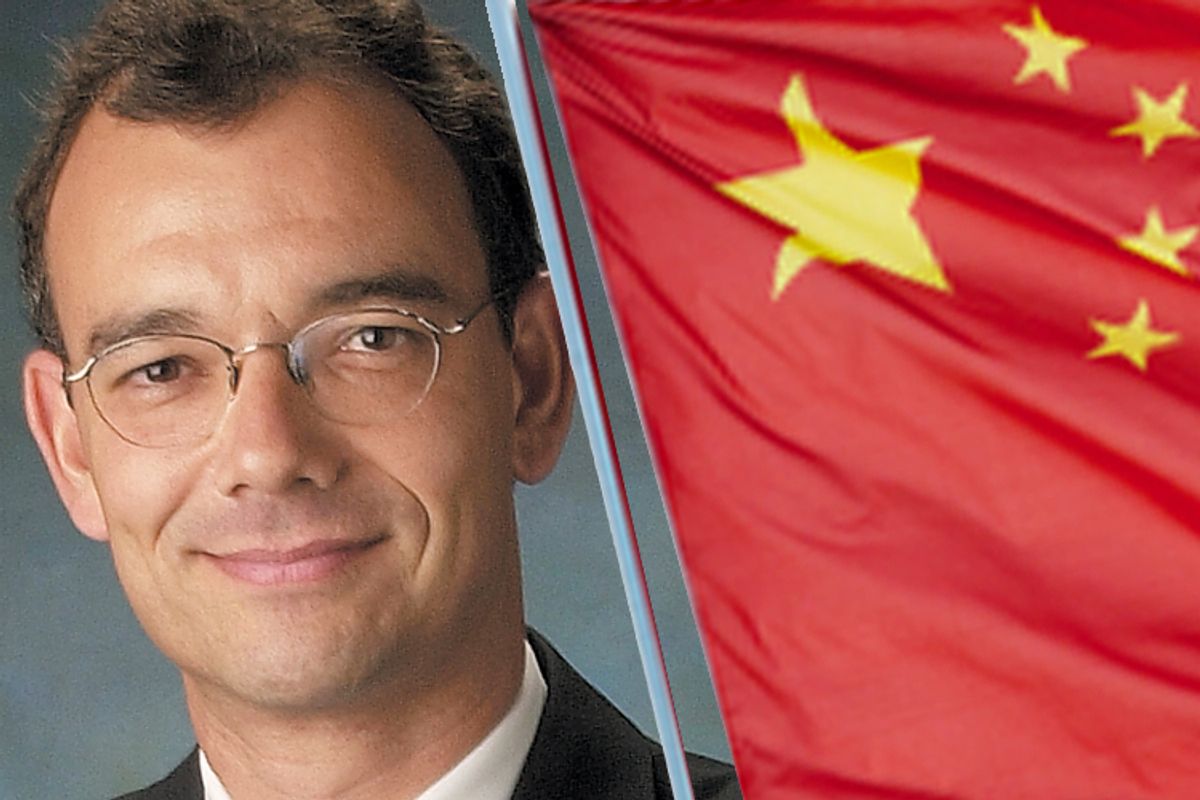 Are critics of the Chinese dictatorship’s mercantilist trade strategy the unwitting enemies of the poor people of the world? Are multinational corporations that transfer production from unionized American workplaces to a low-wage country where independent unions are illegal and dissident democrats like Liu Xiaobao and his wife are jailed the true benefactors of humanity? The answer is yes, according to Matt Miller, a veteran of the Clinton administration who is a senior fellow at the Center for American Progress, a columnist for the Washington Post and the host of the public radio show "Left, Right and Center." Miller, who at different times describes himself as a centrist or a progressive, wrote an Op-Ed for the Post last week titled "Liberalism’s moral crisis on trade."

Here's my question for American progressives: If you're for the little guy, are you just for American little guys? Or are you for poor underdogs even if they happen to have been born in India or China?

….[T]he trade debate will bring special agony for progressives who see themselves as fighting liberals at home and as global humanists abroad. We're at a hinge in history when it's no longer possible to pretend there's no tension between the two.

Whose side are liberals on? The American people? Or people?

The claim that progressives are the real enemies of the poor at home and abroad is a cliché of conservative rhetoric. In domestic policy, conservatives and libertarians pose as champions of the black poor by claiming that the welfare state is a "welfare plantation" that enslaves blacks, and that the best way to help black unemployment is to eliminate the minimum wage -- arguments that have persuaded few black Americans. In trade policy, conservatives and libertarians argue that child labor laws and environmental regulations in developing countries will only hurt the global poor, and that the offshoring of industry from the U.S. to countries with non-union, low-wage workers is a great benefit to the latter.

Seen in this light, for example, big business may turn out to be a more "progressive" global force than American labor or government in the next few decades. Why? Because corporate America is generally the strongest voice for the reciprocal free trade and access to markets that poor nations need to thrive.

Matt Miller has enjoyed a successful career in the elite media as the token Democrat who sides with the right on major issues, while maintaining his "centrist" or "progressive" credentials by arguing for slightly higher taxation and universal healthcare in the form of subsidies for private insurance -- positions that are compatible with moderate conservatism.

On May 11, 2005, in the New York Times, Miller, describing himself this time as a "liberal," defended George W. Bush’s proposal to gradually whittle away the value of Social Security by what was misleadingly called "progressive indexing": "You’d never guess from the Democratic hysteria that President Bush’s plan to 'progressively index' Social Security is an idea we liberals may one day want to embrace. So farsighted Democrats ...  should quit carping about Bush’s evil "cuts" ..." Miller was one of the Democratic pundits who supported the Iraq war.

In 2003 on Wolf Blitzer’s CNN program, Miller declared: "I think capturing Saddam Hussein was a great thing. It’s made America safer and it’s rid the world of this brutal tyrant." According to Robert Kuttner, a genuine progressive, Miller-style neoliberalism is "a recipe for continued shifts to the right. It’s no surprise that Miller is emerging as the conservatives’ favorite liberal."

The project of the New Democrats around Bill Clinton and Robert Rubin was to replace organized labor and the working class with corporate and financial elites and professionals as the social base of the Democratic Party. Matt Miller is the Marx of the managerial-professional class. One of "Tomorrow’s Destined Ideas" in his recent book "The Tyranny of Dead Ideas" is "Only the (Lower) Upper Class Can Save Us From Inequality." He predicts that the lesser rich, the corporate managers and professionals who insist that they are "middle class" while making $250,000 or $500,000 a year, will rein in the plutocratic excesses of the super-rich. It is not clear why the Lower Upper Class can be counted on to act for the benefit of society as a whole -- noblesse oblige, perhaps?

Miller writes that another of "Tomorrow’s Destined Ideas" is that "Only Business Can Save Liberalism" by helping the world’s poor via the offshoring of American manufacturing. In "The Tyranny of Dead Ideas," Miller acknowledges that leading economists, including Ralph Gomory and Dani Rodrik, have established that entire nations as well as individuals can both lose and win from trade. Instead of sharing their conclusion that this justifies rethinking trade policy, Miller calls for offshoring to be rebranded as philanthropy.

According to Miller, the only important debate is about how best to anesthetize American workers as their jobs are offshored -- "which tactics can best assure that we have no protectionist backlash in wealthy nations that ultimately hurts the world's poor" (emphasis in original). Miller writes: "Today’s prevailing idea, that 'free trade is good no matter how many people get hurt,' should yield to a new formulation: that free trade is good, provided we have protections in place to make people feel sufficiently secure in times of rapid economic change" (emphasis in original).

Using the italics that are a hallmark of his breathless style, Miller writes:

This is what economists [who denounce the defense of American manufacturing] are really up to. Their redeeming secret is that in hyping the case for free trade, and shielding us from the truth, their ultimate aim is to keep markets open enough for capitalism to work its magic and lift billions of desperate people from grinding poverty in developing countries. (p. 58, italics in original).

Miller’s argument that morality requires Americans to be impartial between the interests of their own people and those of other nations is easily dismissed. Every practical system of morality, ancient and modern, secular and religious, including the moral philosophy of Adam Smith, permits people to favor their relatives over their neighbors and their neighbors over foreigners. In a world of many communities, public policy would become unworkable if every community had to promote the interest of the entire human race at the expense of its own. How is the interest of the human race, as distinct from that of Tanzania or Taiwan, to be determined by Tanzanian and Taiwanese policymakers? That’s why American liberals have favored anti-colonialism and national self-determination. The Chinese should look after Chinese, Americans after Americans, and diplomacy should resolve any legitimate conflicts.

Miller’s economics are as confused as his ethics. If Miller were truly concerned about barriers to developing-country exports, he would be criticizing the Chinese dictatorship, not American liberals. The victims of Chinese mercantilism include other developing countries in Asia, Africa, Latin American and the Middle East, whose own exports to the West have been harmed by China’s undervaluation of its currency.

What's more, export-led development soon runs into its limits. Small countries like Singapore and Taiwan can develop by turning themselves into export-processing zones for multinationals and selling to giant foreign markets. Large countries cannot. The U.S. and Germany developed in the 19th century on the basis of their giant internal markets. So did Japan after World War II, which, even as it pursued an export-oriented strategy, used non-tariff barriers to reserve the large Japanese market for Japanese-made goods and services.

More than 2 billion Chinese and Indians will never catch up by making goods their people cannot afford to buy for less than a billion affluent Westerners. Not only critics of Chinese mercantilism, but also many Chinese government officials, recognize that China can advance further only on the basis of domestic demand-led growth. Among other things, that means raising the wages of Chinese workers, which have been artificially suppressed in order to finance an overbuilt export sector at the expense of Chinese consumers. While consumption in Brazil, another developing country, makes up 60 percent of GDP, in China between 2001 and 2007 it fell from 44 percent to 36 percent. Such shockingly low consumption numbers are reminiscent of Stalin’s forced industrialization of the Soviet Union at the expense of Soviet workers and farmers.

The truth is there is no genuine conflict between American workers and Chinese and Indian workers. Rejecting export-led development for domestic demand-led growth shared equitably with the workers in every nation is a win-win policy. But the neoliberal ideology of New Democrats like Matt Miller is all about false choices: “Whose side are liberals on? The American people? Or people?” It is hardly surprising that someone who argues that progressives must choose between retirees and children, and between teachers’ unions and students, should argue that American liberals must choose between American workers and foreign workers. The "dead ideas" from whose tyranny Americans must free themselves include ideas like these.

Michael Lind is policy director of the Economic Growth Program at the New America Foundation and author of "Up From Conservatism: Why the Right Is Wrong for America."