A few more wrong moves, and the White House will be reliving the bank bailout public relations disaster 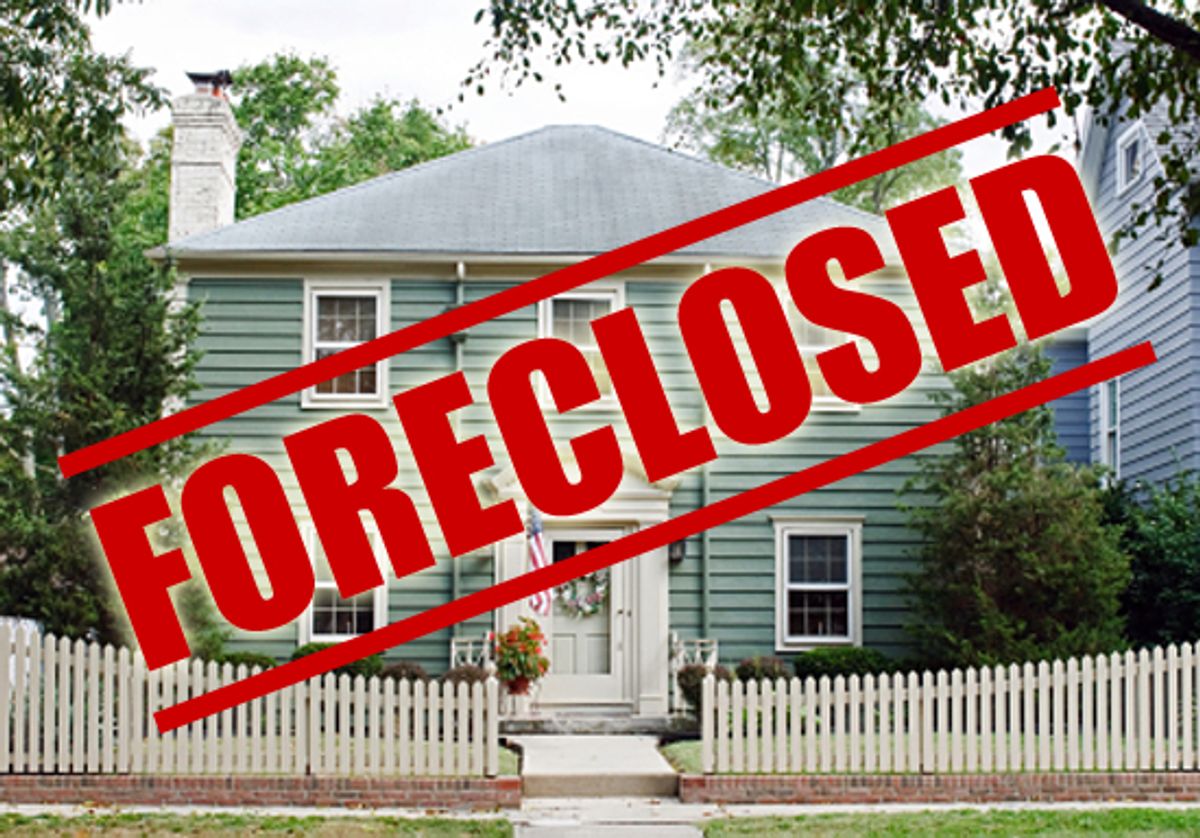 Haven't we seen this movie before?

The swelling outcry over fast-and-loose foreclosures has thrust the Obama administration back into the uncomfortable position of sheltering the banking industry from the demands of an angry public.

That is not the kind of front page story the White House wants to see with weeks to go before a national election, particularly on a day when the Wall Street Journal is blasting out yet another news flash exposing record pay to financial institution executives. But the administration has only itself to blame. White House advisor David Axelrod's attempt over the weekend to minimize the foreclosure mess as mere paperwork "mistakes" was a massive misrepresentation of what's really going on. With Democratic politicians across the country calling for a nationwide foreclosure moratorium, Obama's reluctance to get out in front of the issue, so far, is yet another public relations disaster. Even if a national moratorium is not the right solution to an incredibly complex problem, the White House needs to be articulating, now, exactly how it intends to tackle this monster.

For those who want to get up to speed quickly on the foreclosure crisis, CNBC's John Carney has the best introduction. Once you've digested that, you may be ready for Rortybomb's five-part series unpacking the larger implications.

But the key facts are these: In the process of making mortgage loans, transferring ownership of those loans,  slicing and dicing them into securities and, finally, initiating foreclosure proceedings on loans in default, banks, lenders and mortgage servicers engaged in illegal activity on a large scale. The legally mandated procedures put into place to ensure that no errors are ever made with respect to the transfer of property simply weren't followed. Key documents necessary to prove ownership -- to prove that a bank, for example, has the legal right to begin foreclosure proceedings, cannot be located and may not even exist.

Whether you want to dismiss this debacle as a concatenation of paperwork errors made while seeking economies of scale, or out-and-out calculated fraud by the mortgage industry against homeowners, is in some ways an irrelevant game of semantics. When legally mandated procedures aren't followed, courts get upset, investors start wondering if they've been sold a bill of goods, and the litigation floodgates fly open. Bank of America and GMAC and other lenders have declared their own foreclosure moratoriums because they have suddenly realized that they are looking at potentially devastating legal liabilities.

Progressives can be excused for feeling an almost unlimited sense of schadenfreude at the suddenly scrambling banks. For many people, on the left and right, there would be nothing more pleasurable than the sight of, say, Citigroup, bankrupted by a sea of mortgage-related lawsuits. It is also of course enormously important to take advantage of this opportunity to completely rethink the government's approach to the foreclosure crisis, and find a way to keep people in their homes with mortgages that are more appropriate to their current financial wherewithal. By itself, however, a national foreclosure moratorium isn't going achieve that -- it will just postpone resolution of the problem, and in the process conceivably create some dangerous new risks.

And here's where Obama's problem lies. The foreclosure crisis isn't just about banks playing fast and loose with people's homes. The recklessness with which banks and mortgage servicers handled their business has thrown into question the entire architecture of securities assembled from mortgages. All that toxic waste just turned a Hungarian sludge shade of bright flashing orange. If and when the owners of those securities start their own legal actions or demand that the issuers of the securities take them back, the biggest financial institutions in the United States will once again teeter on the brink -- and threaten to bring all the rest of us down with them. There are systemic risk implications to this "paperwork" lollapalooza.

Banks concerned about the recovery values of their mortgage portfolios and higher capital requirements, may pull back lending even further than they already have. In short, this could be the beginning of the second leg of the credit crunch.

It should be obvious to everyone that a credit crunch replay would be a disaster of almost unthinkable proportions. So yes, we have seen this movie before. Just as with the first credit crunch, there is good reason not to take action (or inaction) that results in a systemic collapse. Our current unemployment rate and distressed residential real estate market could get much, much worse.

My guess is that the White House economic brain trust is fully aware of how bad this could get, and that their caution on endorsing a national foreclosure moratorium is connected to the uncertainty as to what the systemic implications of bringing the entire mortgage industry to a screeching halt might be. That's fine, but it's not enough. If Wall Street is once again teetering on the brink, then the Obama administration has leverage -- leverage to make a deal that keeps Americans in their homes, defuses the foreclosure pandemic and ensures that the interests of average citizens are protected, along with the integrity (such as it is) of the larger financial system. Any kind of solution that attempts to address the gaping legal hole at the heart of the foreclosure mess must be paired with relief for distressed homeowners. It's that simple.

That shouldn't be a hard thing to articulate. As Elizabeth Warren said in an interactive chat session broadcast at Whitehouse.gov while I was writing this post "the foreclosure problem is big and it is serious." Either she, or Obama, needs to make it clear to the general public just how serious it is and what the government plans to do. David Axelrod, obviously, is not the man for that job. Republican politicians are equally tongue-tied. For the most part, they've been remarkably quiet, aware that it is political suicide to defend the banks but ideologically opposed to any government intervention in favor of homeowners.

But time is short. Fumble this ball, and the game might be over.