They hate us for our occupations 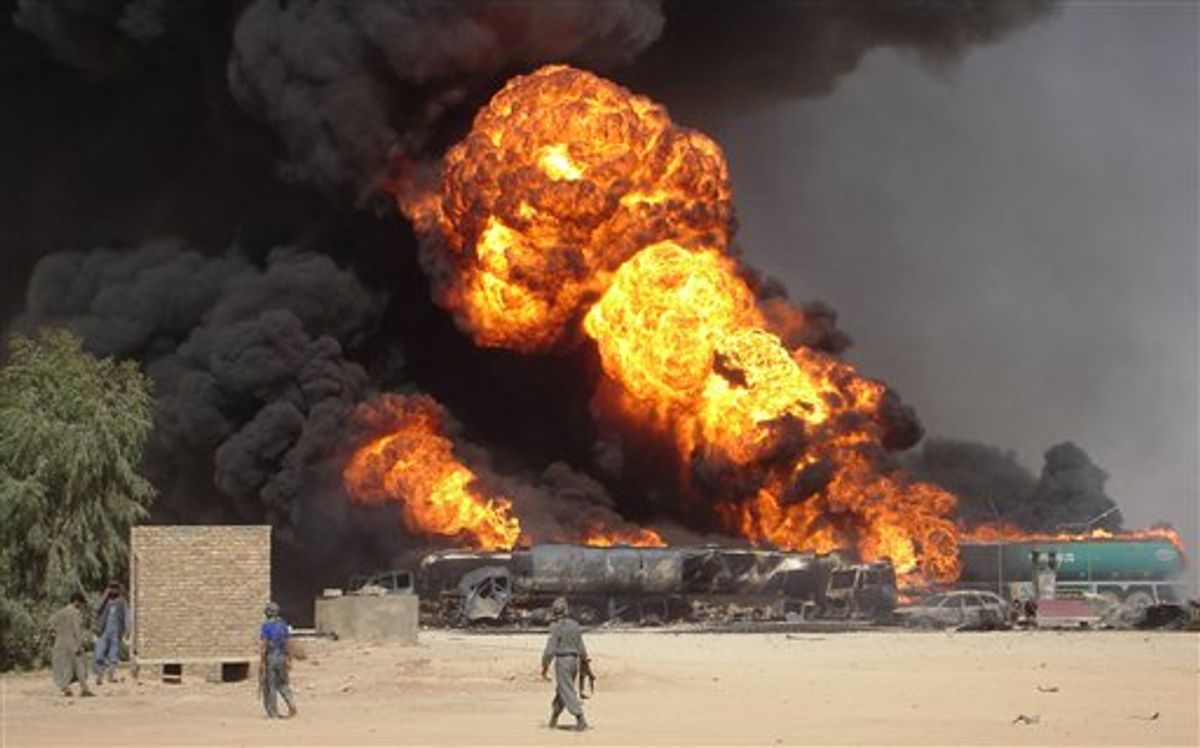 In 2004, Defense Secretary Donald Rumsfeld commissioned a task force to study what causes Terrorism, and it concluded that "Muslims do not 'hate our freedom,' but rather, they hate our policies":  specifically, "American direct intervention in the Muslim world" through our "one sided support in favor of Israel"; support for Islamic tyrannies in places like Egypt and Saudi Arabia; and, most of all, "the American occupation of Iraq and Afghanistan" (the full report is here).  Now, a new, comprehensive study from Robert Pape, a University of Chicago political science professor and former Air Force lecturer, substantiates what is (a) already bleedingly obvious and (b) known to the U.S. Government for many years:  namely, that the prime cause of suicide bombings is not Hatred of Our Freedoms or Inherent Violence in Islamic Culture or a Desire for Worldwide Sharia Rule by Caliphate, but rather.  . . . foreign military occupations.  As summarized by Politico's Laura Rozen:

Pape. . . will present findings on Capitol Hill Tuesday that argue that the majority of suicide terrorism around the world since 1980 has had a common cause: military occupation.

Pape and his team of researchers draw on data produced by a six-year study of suicide terrorist attacks around the world that was partially funded by the Defense Department's Defense Threat Reduction Agency. They have compiled the terrorism statistics in a publicly available database comprised of some 10,000 records on some 2,200 suicide terrorism attacks, dating back to the first suicide terrorism attack of modern times - the 1983 truck bombing of the U.S. Marine barracks in Beirut, Lebanon, that killed 241 U.S. Marines.

"We have lots of evidence now that when you put the foreign military presence in, it triggers suicide terrorism campaigns, ... and that when the foreign forces leave, it takes away almost 100% of the terrorist campaign," Pape said in an interview last week on his findings.

Pape said there has been a dramatic spike in suicide bombings in Afghanistan since U.S. forces began to expand their presence to the south and east of the country in 2006. . . . Deaths due to suicide attacks in Afghanistan have gone up by a third in the year since President Obama added another 30,000 U.S. troops. "It is not making it any better," Pape said.

Pape believes his findings have important implications even for countries where the U.S. does not have a significant direct military presence, but is perceived by the population to be indirectly occupying.

For instance, across the border from Afghanistan, suicide terrorism exploded in Pakistan in 2006 as the U.S. put pressure on then Pakistani President Gen. Pervez Musharraf "to divert 100,000 Pakistani army troops from their [perceived] main threat [India] to western Pakistan," Pape said.

Imagine that.  Isn't Muslim culture just so bizarre, primitive, and inscrutable?  As strange as it is, they actually seem to dislike it when foreign militaries bomb, invade and occupy their countries, and Western powers interfere in their internal affairs by overthrowing and covertly manipulating their governments, imposing sanctions that kill hundreds of thousands of Muslim children, and arming their enemies.  Therefore (of course), the solution to Terrorism is to interfere more in their countries by continuing to occupy, bomb, invade, assassinate, lawlessly imprison and control them, because that's the only way we can Stay Safe.  There are people over there who are angry at us for what we're doing in their world, so we need to do much more of it to eradicate the anger.  That's the core logic of the War on Terror.  How is that working out?

Take the case of Faisal Shahzad.  He seems to be, if you put him in a category . . .  he grows up with the reputation of being a party guy, a party boy in the tribal areas [in Pakistan]. . . . He then comes to America and all the pictures are of a modern young man. . . . He changes, but he changes, again, for interesting reasons. The media would have us believe that it's the violence in the Koran and the religion of Islam.  But hear what he's saying.  He's in fact saying:  I am taking revenge for the drone strikes in the tribal areas.  So he's acting more like a tribesman whose involvement in Pashtun values . . .  one of the primary features of that is revenge, rather then saying I'm going to have a jihad or I've been trained by literalists . . . .

That is confirmed by mountains of evidence not only about what motivated Shahzad but most anti-American Terrorists as well:  severe anger over the violence and interference the U.S. brings to their part of the world.  The only caveat I'd add to Professor Ahmed's remarks is that a desire to exact vengeance for foreign killings on your soil is hardly a unique attribute of Pashtun culture.  It's fairly universal.  See, for instance, the furious American response to the one-day attack on 9/11 -- still going strong even after 9 years.  As Professor Pape documents:  "when you put the foreign military presence in, it triggers suicide terrorism campaigns . . . and that when the foreign forces leave, it takes away almost 100% of the terrorist campaign."  It hardly takes a genius to figure out the most effective way of reducing anti-American Terrorism; the only question is whether that's the actual goal of those in power.