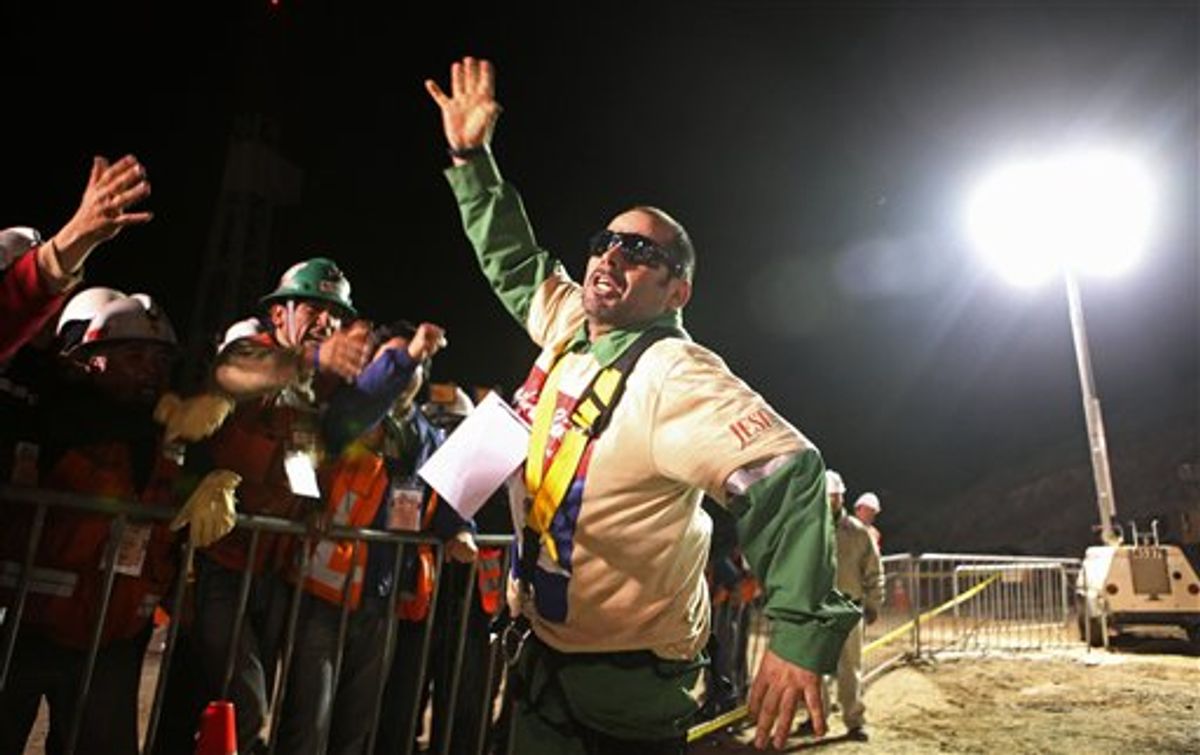 In this photo released by the Chilean government, miner Mario Sepulveda celebrates after being rescued from the collapsed San Jose gold and copper mine where he was trapped with 32 other miners for over two months near Copiapo, Chile, early Wednesday Oct. 13, 2010. (AP Photo/Hugo Infante, Chilean government) (AP)
--

What kind of a man spends 69 harrowing days trapped in a confined space and, with rescue within his grasp, says, "It's OK, I can wait another day?" What does it take to remain generous and empathetic in a world where queue jumping at Starbucks can cause an uproar?

Luis Urzúa, a 54-year-old shift leader on a Chilean mining crew, is today, as he has been since Aug. 5, stuck half a mile underground in a collapsed gold and copper mine. He will stay there until the other 32 of his colleagues who have been trapped there with him are freed. In a story that has commanded the attention of the globe, Urzúa and his fellow miners have endured the kind of confinement most of us will only know in our worst nightmares – living 17 days after their mine collapsed with no outside contact whatsoever, and then for over two more months on limited food, medicine and communication as rescuers worked steadfastly to reach them.

It's been a story of human tenacity, one that so far seems destined for the happiest of possible endings. And as crews finally reached the men earlier this week and began the long process of pulling them, individually, to freedom, the question that arose almost immediately was not who would have the privilege of seeing daylight first. It was who would have the honor of leaving that mine last. As Chile's health minister Jaime Manalich told reporters Sunday, "They were fighting with us yesterday because everyone wanted to be at the end of the line, not the beginning. It's a question of solidarity."

One might argue that copper miners are made from a different cloth than most of us. In many corners of the world, after all, merely getting cut off in traffic is just cause for flying into a hate rage. And indeed, Urzúa -- who stoically told reporters earlier this week, "I hope to never live again like this, but that's the life of a miner" -- seems to have highly evolved coping mechanisms. "We had to be strong, all the workers in the mine fulfilled their roles, as journalists, as spokesmen, and we worked hard for our own rescue." Yet that determined resilience, that innate understanding that "every man for himself" is rarely the most useful strategy, has resonated around the world. The mining rescue has captivated us because of its suspense and uniqueness. But it also, profoundly, a story of connection.

Earlier this year, for PBS's "This Emotional Life," former Vietnam POW Bob Shumaker related the tale of his three years in captivity – and how he and his fellow prisoners kept their sanity and humanity by tapping in code to each other through the walls. In the worst of our moments, in the depths our fears, sometimes the greatest aspects of our characters emerge -- and right in there is the victory that comes from a willingness to depend on each other. Back in August, Mario Sepúlveda, the charismatic 40-year-old who became the group's unofficial spokesman during the ordeal, sent a video message, giving the world a tour of the miners' 600-square-foot quarters. "We have organized everything very well down here. Here is where we meet every day; here is where we plan, where we pray. Here is the meeting room where all of the decisions are made with the involvement of the 33 that are here." He even wryly pointed out the dominoes on a table and said, "This is our casino."

Over the next several hours and far into Thursday, other men will, one by one, be lifted out of the mine and back into the world, until, if all goes well, only Luis Urzúa is left standing in the hole that has been his home since August. He will be, for the first time in 70 days, alone. But his resilience, optimism and abiding understanding of community and collaboration have shown the world the power of togetherness. As Sepúlveda, the second man to emerge from the mine, told reporters Wednesday, "I would like to see the world united by love, not a religious love, but just no more fights, no more war." United. That's the word. You don't have to survive a disaster to comprehend Sepúlveda's riveting message, or to understand instinctively why solitary confinement is one of the cruelest of tortures. It's because, quite simply, we need each other.