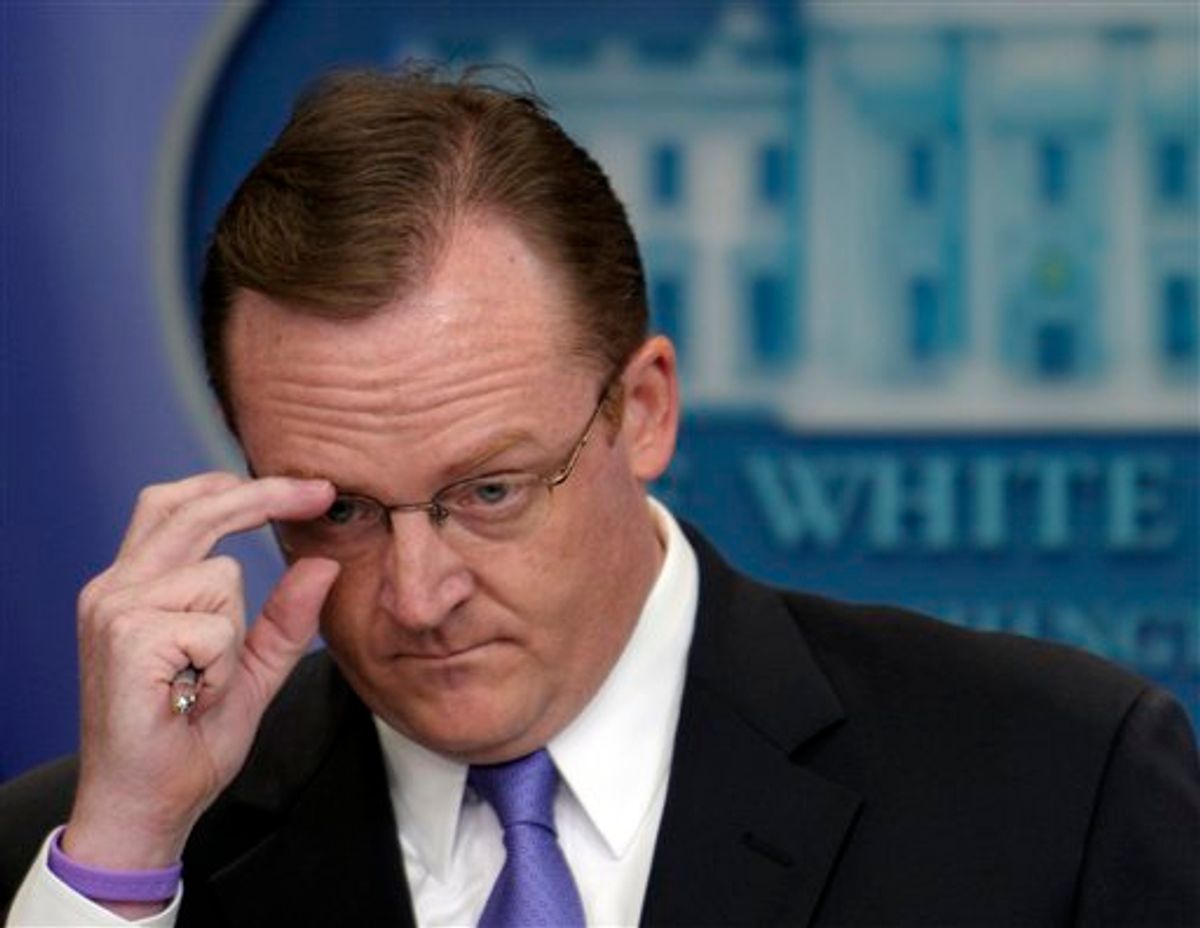 The controversy over Chamber of Commerce election funding raises a very real and important  issue:  the genuine threat posed to our political system by unknown funders who can pour massive amounts of money into negative ads while hiding who they are.  The White House's arguments about the need for more disclosure are largely correct, although that legitimate issue has been obscured by reckless, sloppy and somewhat McCarthyite behavior in accusing the Chamber of Commerce -- with no evidence whatsoever -- of using nefarious "foreign money" to pay for these ads, and then demanding that the Chamber reveal its funders in order to prove its innocence.  That is lamentable both because guilty-until-proven-innocent attacks are inherently misguided, and more so, because that attack has obscured the genuine issue over the dangers posed by undisclosed sources of campaign money.

But even regarding the White House's legitimate arguments about disclosure, there is some major hypocrisy taking place.  White House Press Secretary Robert Gibbs has been leading the charge against the Chamber, citing what he called "the spirit of disclosure" when telling CBS' Mark Knoller this earlier this week:

But what makes it so infuriating to watch Gibbs make this argument is that Gibbs himself -- back in 2003 and 2004 -- was heavily involved in exactly the same kind of anonymous-funded negative campaign the Chamber is running now, when the brand-new advocacy group for which he was the spokesman invoked the same excuses as the Chamber is invoking now to conceal its donors.  As Chris Moody recalls, when Howard Dean was the 2004 Democratic front-runner, a new group abruptly popped up -- calling itself "Americans for Jobs, Health Care and Progressive Values" -- and, shortly before the Iowa primary, began running an extremely ugly anti-Dean TV ad campaign, featuring images of Osama bin Laden, along with ominous claims that Howard Dean would fail to Keep Us Safe, that he could not "compete with George Bush on foreign policy."  This was the ad:

The Dean campaign was furious that fellow Democrats would run an ad like this that so obviously relied on (and reinforced) core Rovian, fear-mongering attacks, but more so, they were absolutely incensed that nobody knew who had funded this group, of which the very same Robert Gibbs, having supposedly just left his position as press secretary with the Kerry campaign, was the spokesman.  And just as the Chamber is doing now, Gibbs' group categorically refused to disclose its funders until the law compelled it to do so -- i.e., months later, once the Dean campaign was destroyed.  Just read this Dec. 16, 2003, New York Times article on the controversy to see how similar this was, and how hypocritical it is for Robert Gibbs of all people to be trumpeting "the fundamental threat to our democracy" posed by nondisclosure of campaign funding sources:

A new Democratic group that is running advertisements against Howard Dean and has not yet disclosed its sources of financing has introduced by far the toughest commercial of the primary election season.

The spot opens with a Time magazine cover featuring Osama bin Laden as synthesizer music seemingly out of a post-apocalyptic science fiction movie is heard.

As the camera focuses on Mr. bin Laden's eyes. the following words flash on the screen: "Dangerous World," "Destroy Us," "Dangers Ahead" and "No Experience."

The advertisement is the latest salvo in what amounts to a "stop Dean" campaign sponsored by the new Democratic group, Americans for Jobs, Health Care and Progressive Values ... Its spokesman, Robert Gibbs, recently resigned as the press secretary for Senator John Kerry of Massachusetts, another presidential candidate.

The mystery about who is financing the group, which began its efforts about two weeks ago with an advertisement highlighting past support for Dr. Dean from the National Rifle Association, infuriated Dr. Dean's campaign staff.

Mr. Jones, the group's treasurer, said in response, "We will disclose donors when the law requires."

As Moody notes, The Chicago Tribune's Lynn Sweet, months later, did a post-mortem on the collapse of the Dean campaign, and attributed a large part of its demise to "the 18 individuals, two corporations and six unions [Democratic fund-raiser David] Jones persuaded to donate to his Americans for Jobs, Healthcare and Progressive Values fund."  As Sweet noted, this smear-Dean group was created with the specific purpose of circumventing campaign finance disclosure laws and hiding its funders until after the key primaries were held:

Jones conceived the anti-Dean operation last year and became the treasurer of what is called a 527 organization, named for the section of the Internal Revenue Code under which these groups operate ...

Jones' group would operate in initial anonymity because it did not have to file a report disclosing donors with the IRS until Jan. 31 to reflect money collected in 2003. That would be after the Iowa, New Hampshire and South Carolina contests. That's a reason most of the stories written about Jones' group -- really a fund since there were only a few people involved, despite the name -- described it as "shadowy" and "secretive."

Once the full funding was finally disclosed -- after the Dean campaign was essentially dead -- it turned out that its largest donor was the "Center for Middle East Peace," which bankrolled it for $200,000, along with the YES Network ($125,000), the Senate campaign fund of Bob Torricelli (who had been forced not to seek reelection in disgrace over a campaign finance scandal and is now a lobbyist), and various unions.  All of that was actively concealed from voters while these smear ads ran against Dean; and it stay steadfastly concealed until well after the dirty deed was done.  In other words, in order to destroy Howard Dean's candidacy, the group for which Robert Gibbs was the spokesman did exactly that which the Chamber of Commerce is now doing (albeit Gibbs' group did it on a much smaller scale), and invoked the same rationale to justify its covert actions.

When Obama chose Gibbs to be his campaign spokesman, Jerome Armstrong -- who had worked on the Dean campaign -- was outraged precisely because of Gibbs' involvement in this ad.  He argued (presciently, one could say) that Obama's affection for someone who would be responsible for such a covert, right-wing-replicating, fear-mongering Rovian attack ad against a progressive candidate reflected what type of politician Obama was.

I'm well aware that most Democrats do not want to hear any of this right now.  Many believe that Democrats have finally found an effective weapon in these Chamber-of-Commerce attacks and are completely uninterested in whether Robert Gibbs (and his former anti-Dean Democratic group) is guilty of exactly the same cardinal sin as he's accusing the Chamber of committing.  I have no doubt that many believe that there's some sort of partisan duty to overlook such unpleasant facts in order to help the Democrats win.  But this type of totally empty, soul-less, dishonest advocacy is why so many people turn away from the political process and become increasingly apathetic about the outcomes of these two-party wars.  Remember all the "corrosive cynicism" talk from the Obama campaign?  This is what causes that.  It'd be nice if Robert Gibbs actually believed in the "disclosure" arguments he is making.  I believe in them.  But he obviously does not believe in them, and would have no trouble -- he had no trouble -- embracing exactly the opposite view if it advanced his political interests.  Look at the corpse of the 2004 Howard Dean campaign if you have doubts about that.

UPDATE:  Think Progress, which originally raised these questions about the Chamber's financing, has a new, well-documented update today demonstrating that the Chamber receives substantial amounts of funds from foreign companies.  The Chamber's response is that it segregates that money and doesn't spend it on elections (and the response to that is that money, being fungible, can't be segregated that way).   I have no objection at all to the questions Think Progress is raising.  I think those are valuable.  As I said, nondisclosure is a serious threat.  But it's a different issue entirely for the president to be tossing accusations and innuendo at private actors that he doesn't know are true and then demanding that they disclose evidence to disprove it, and it's another thing entirely for Robert Gibbs, who did exactly the same thing on behalf of a Democratic Party advocacy group, to be righteously condemning this behavior.