The New York Post regularly runs anti-gay cartoons, but it has a problem with Carl Paladino? There's a reason 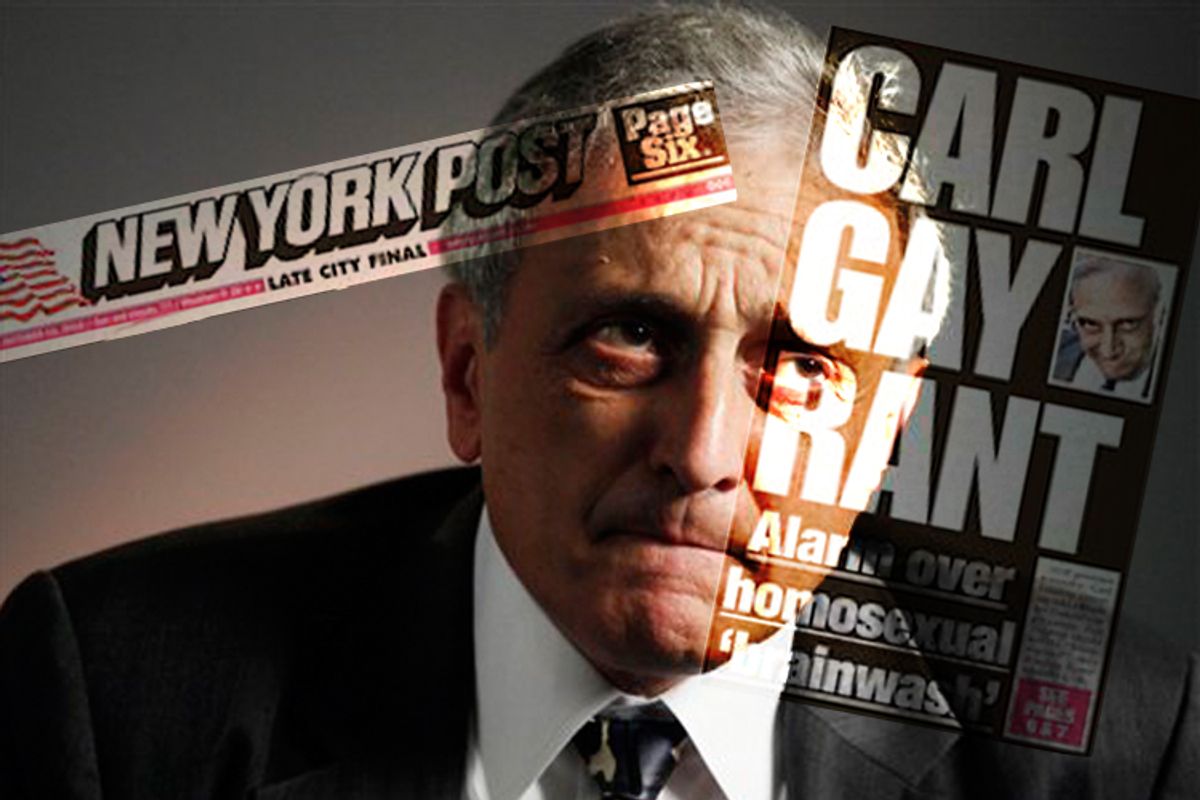 Readers of Rupert Murdoch's New York Post could be forgiven this week for wondering what happened to the paper they thought they knew: For two days in a row, the tabloid used its front-page to take aim at Carl Paladino, the Tea Party-backed Republican gubernatorial candidate, for his recent anti-gay remarks.

"CARL GAY RANT: Alarm over homosexual 'brainwash' " shouted the paper's Monday cover, which featured a creepy-looking head shot of Paladino. In another front-pager Tuesday, the Post snarked: "Carl Paladino got back to the pressing issues facing the state yesterday -- like accusing gubernatorial rival Andrew Cuomo of being a bad father for taking his daughters to the Gay Pride Parade."

This is the same New York Post that has made gay-baiting an art for years. Post cartoonist Sean Delonas became the target of a campaign by gay rights groups after he portrayed openly gay New Jersey Gov. Jim McGreevey wearing a bikini and a "Miss New Jersey" sash. His take on gay unions involved a man trying to get a marriage license with a sheep. Over the summer, columnist Andrea Peyser went after the movie "The Kids Are All Right," quoting one Connecticut mother: "Hollywood -- we don't care about the sick lives you lead behind closed doors. Just don't bring children into it."

So has the Post finally seen the light on gay rights? Not likely.

Instead, the coverage of Paladino's comments underscores the awkward position the Post is in when it comes to New York's gubernatorial race: The Post has become an unlikely opponent of the very candidate who embodies the paper's working class stiff persona. This phenomenon actually predated the now-famous brawl between Paladino and Post State Editor Fred Dicker.

Murdoch has a habit of throwing his weight (and the resources of his media empire) behind candidates who are favored to win in important races. Back in 1997, for example, Murdoch-owned papers in the U.K. abandoned their long-held support for the Tories and got behind the Tony Blair-led Labour landslide. Murdoch repeated the trick again in 2008, singing the praises of none other than Barack Obama. He even admitted to directing the Post to endorse Obama.

Now fast forward to this year and the race for New York governor -- one of the most powerful offices in the country, particularly when it comes to the media industry. Democrat Andrew Cuomo has been heavily favored to be elected governor since at least 2009. Apparently smelling a winner, Murdoch's Post started giving Cuomo favorable coverage early on (well before Paladino was considered a serious threat to Republican candidate Rick Lazio).

Take this October 2009 story by Dicker, headlined "Andy warns Rudy: Psst! I'm running." The story, citing unnamed insiders, read like a Cuomo press release. It spoke of Cuomo's strength in the polls, blindly quoted a Democrat (supposedly) warning Rudy Giuliani not to run for governor, and offered uber-friendly lines like this:

Sources familiar with Cuomo's strategy say he's in no hurry to announce his candidacy for governor, preferring to remain focused on the official work that has made him the most popular political figure in the state.

Cuomo has recognized the value of the Post's support. He's a regular source for Dicker, and a regular guest on his radio show. Meanwhile, the Post's editorial board, which should be a natural ideological ally for Paladino, has been regularly slamming him.

So if Cuomo's big lead over Paladino holds, the Post -- and Murdoch -- is going to have an ally in the governor's office come 2011. (Or at least Murdoch is betting it will.)