Hilary Swank stars as a self-made lawyer who gets her brother out of prison -- so why's it such a huge bummer? 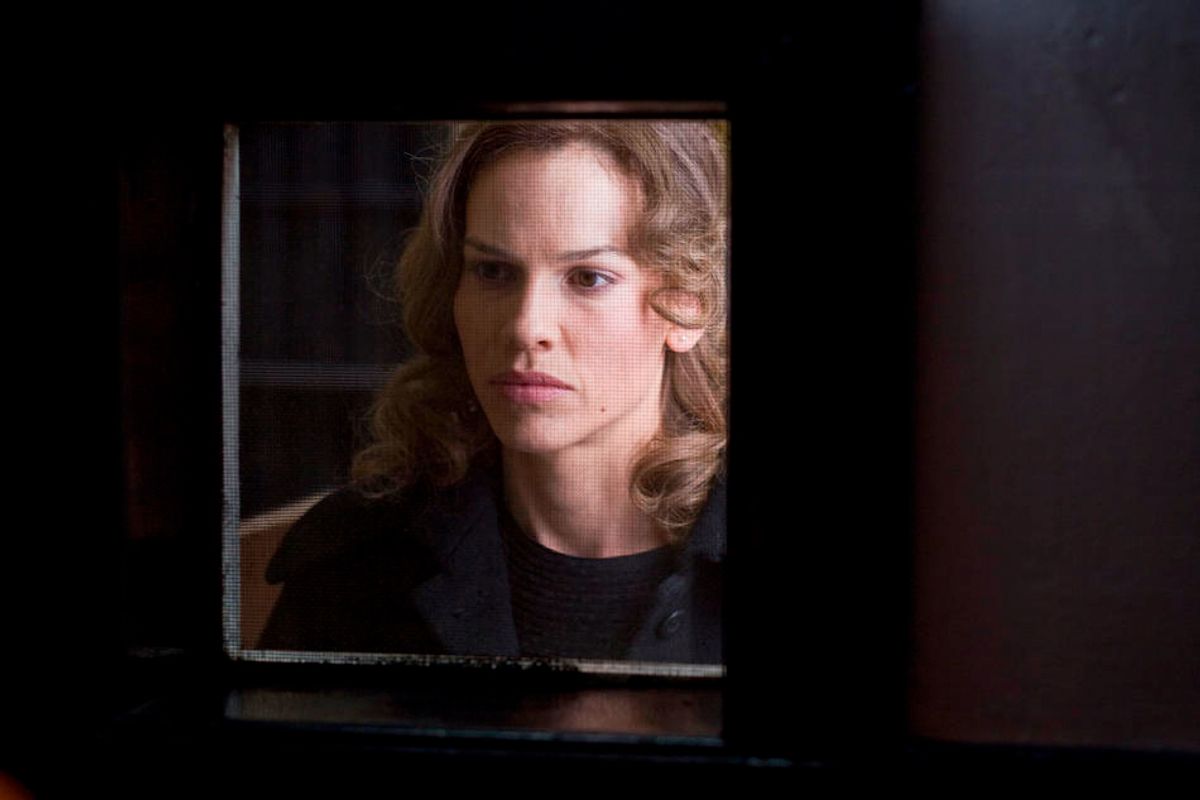 I suppose "Conviction" director Tony Goldwyn is aiming at an old-school, Frank Capra-style inspirational fable, the kind of foursquare movie about an individual triumphing against a corrupt system that Hollywood used to make all the time. He certainly gets Oscar-bait leading performances from a resolute Hilary Swank and a dissolute Sam Rockwell in this fact-based drama about a Massachusetts high-school dropout and single mom who works her way through law school in order to get her wrongfully convicted brother sprung from prison.

But "Conviction" is very much a product of its time, which makes it surprisingly stark and realistic, at least in patches, but also means that its inspirational message comes loaded with asterisks. In an age of worsening economic hardship and empty political bickering, circumstances that can only make things tougher on people like Betty Anne Waters (Swank) and her brother Kenny (Rockwell), this movie mixes plenty of deterministic gloom into its uplift. Do Oscar voters and the general public really long to be reminded just how easy it is for authority figures to ruin poor people's lives?

Producer and director Goldwyn -- and yes, his grandpa was the legendary Sam Goldwyn -- deserves credit for weaving the texture of genuine American life into what could easily have become a bogus Hollywood yarn about a spunky, irresistible mom who won't take no for an answer. I mean, that does describe the Betty Anne played here by Swank, up to a point. But Goldwyn and screenwriter Pamela Gray don't run away from the story's less comforting realities, and cinematographer Adriano Goldman captures working-class existence in rural Massachusetts and Rhode Island without romanticism or condescension.

There's a wonderful bar scene about a third of the way into "Conviction" that distills all the story's heartbreak and possibility into a few minutes. Gray's cut-up chronology moves back and forth between three time periods: the early 1980s, when Kenny is convicted of the murder of a diner waitress; the mid-'90s, when Betty Anne is working her way through law school; and the period around 2000, when she's trying to find evidence that will overturn his conviction. So as we watch Kenny dancing with his infant daughter -- and then starting a fight, and then mooning the crowd, and generally using up too much oxygen in the room -- or Betty Anne making out with her new husband, we already know that none of these relationships will last and that these people are already screwed, almost before their adult lives have begun.

Yeah, it is amazing that the real-life Betty Anne Waters, a woman with no education and no job skills, reinvented herself as an attorney and got her brother out of prison after 18 years. The price was painfully high: Her marriage broke up, she lost custody of her two sons and she alienated her sister (who is never mentioned in the film). She sacrificed all semblance of a normal life to help a small-town bad boy who was evidently railroaded by a couple of cops who hated his guts. It's the sort of frame-up, one is forced to conclude, that happens all the time. How many such cases feature a loving sister who puts herself through law school, or captures the attention of celebrity defense attorney Barry Scheck?

I feel guilty even mentioning the fact that in real life, Kenny Waters died in a fall just six months after getting out of prison. Gray and Goldwyn don't bring that up, maybe because it's an irrelevant detail, and maybe because their movie is meant to make you feel that there is always hope in darkness, not that life is a cruel joke. "Conviction" is an inelegant but compelling mishmash, worth seeing for a terrific female-centric cast that also includes Minnie Driver, Melissa Leo (as the villain!), Juliette Lewis (with horrible busted teeth), Clea DuVall and Karen Young. Ultimately, though, it's a little schizo, like a depressed dude in a clown suit, or a Theodore Dreiser novel hopped up on not enough happy pills.