"I wonder, why was I victimized?"

Pakistani victims of U.S. drone strikes speak out in a new report on increasing civilian casualties in the region 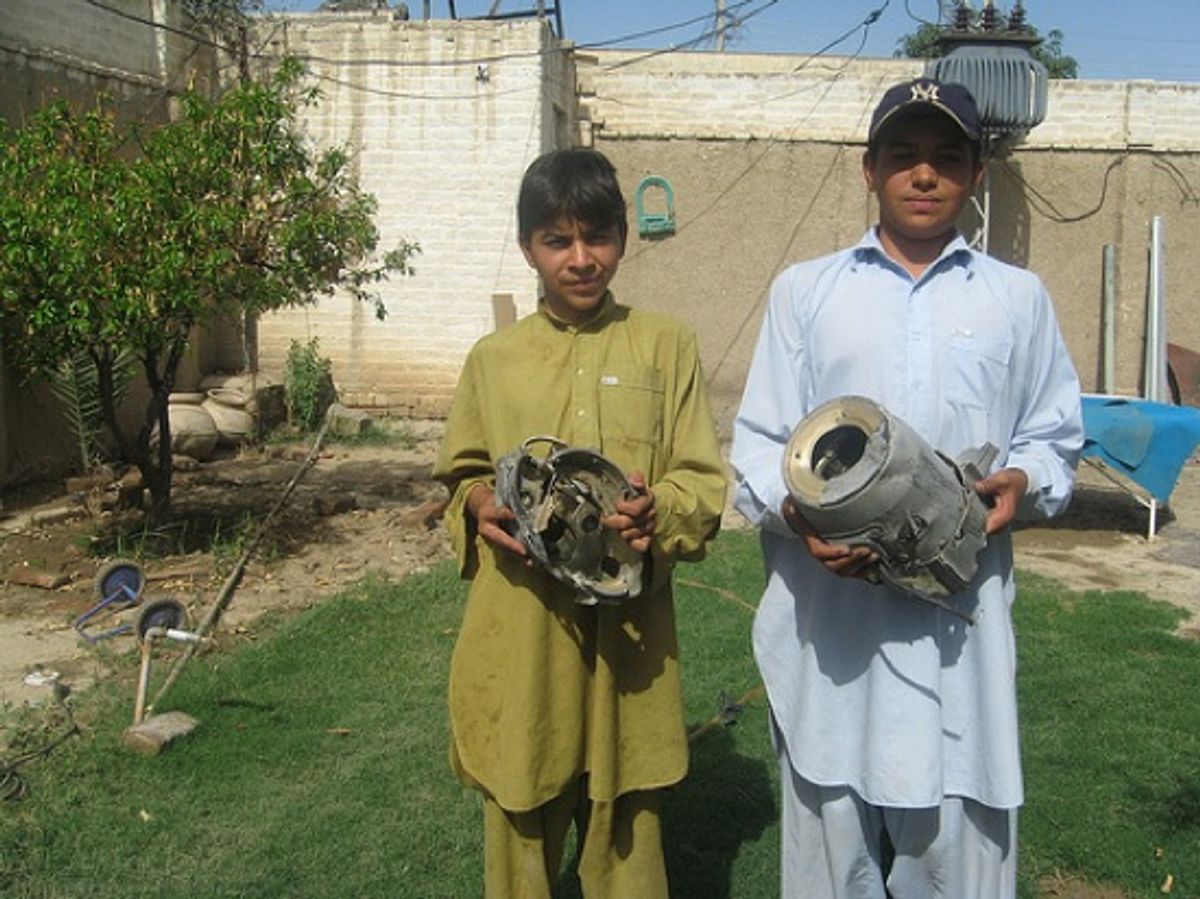 Children in North Waziristan with debris from drone missile
--

A new report from the Campaign for Innocent Victims in Conflict (CIVIC) concludes that innocent civilians in northwest Pakistan are getting hammered by all sides -- the U.S. (drone strikes), the Pakistan military (ground and aerial bombardment) and local militants (terrorist attacks).

Christopher Rogers, the Harvard-trained lawyer who authored the report, did some great reporting. He interviewed many family members of slain Pakistani civilians -- voices that are virtually never heard in the U.S. media. Here, for example, is his summary of the first drone strike on President Obama's watch, way back in January 2009:

The Obama Administration carried out its first drone strike in Pakistan on January 23, 2009, three days after the President’s inauguration. However, instead of striking a Taliban hideout, the missiles struck the house of Malik Gulistan Khan, a tribal elder and member of a local pro-government peace committee. Five members of his family were killed. “I lost my father, three brothers and my cousin in this attack,” said Adnan, his 18 year-old son. Adnan’s uncle claimed, “We did nothing, have no connection to militants at all. Our family supported the government and in fact … was a member of a local peace committee.”

The family provided CIVIC with detailed documentation of the deaths of the five family members, including a report from the Assistant Political Agent of South Waziristan and a local jirga requesting the government to pay compensation. The documentation confirms the family was innocent.

Reliable numbers of how many civilians have been killed by U.S. drones are impossible to come by. Since there is little to no U.S. presence on the ground to examine the aftermath of drone attacks, the government itself probably doesn't know who is getting killed. The report also notes that the U.S. government does not offer any kind of compensation to victims and does not appear to have a clear definition of who it counts as a civilian. For example, do family members of alleged militants count?

Also problematic is the lack of independent reporting on the drone strikes (often because the strikes occur in areas that are too dangerous for travel). Wire stories on drone strikes are  commonly sourced to unnamed intelligence officials.

Estimates of people killed by the 124 U.S. drone strikes over the past two years range from 788 to 1,344, according to the report, And though U.S. officials apparently say (it's not clear in what context) that fewer than 20 civilians have been killed, Rogers concludes that this is certainly an underestimate. In just nine strikes that he investigated, he found more than 30 civilians had been killed.

Here's another story of a man interviewed by Rogers whose home was destroyed by a drone strike:

Gul Nawaz, from North Waziristan, was watering his fields when he heard the explosion of drone missiles: “I rushed to my house when I heard the blast. When I arrived I saw my house and my brother’s house completely destroyed and all at home were dead.” Eleven members of Gul Nawaz’s family were killed, including his wife, two sons and two daughters as well as his elder brother, his wife, and his four children. “Yes, the drone strikes hurt the Taliban. Most of the strikes are effective against the Taliban but sometimes innocent people also become the victim of such attacks. Take my case … ” said Gul Nawaz.

“I blame the government of Pakistan and the USA … they are responsible for destroying my family. We were living a happy life and I didn’t have any links with the Taliban. My family members were innocent … I wonder, why was I victimized?"

Unsurprisingly, all of this is creating anger among the victims at the U.S. and their own government. Said Rogers:

"I heard over and over from victims that they expected help, but most never even got an apology for what happened to them. The U.S. and Pakistan should take note that denying or overlooking their losses is provoking anger and undermining the Pakistani government's legitimacy."