Candied bacon, to get you ready for Halloween

Ding dong! You're going trick-or-treating a little early this year 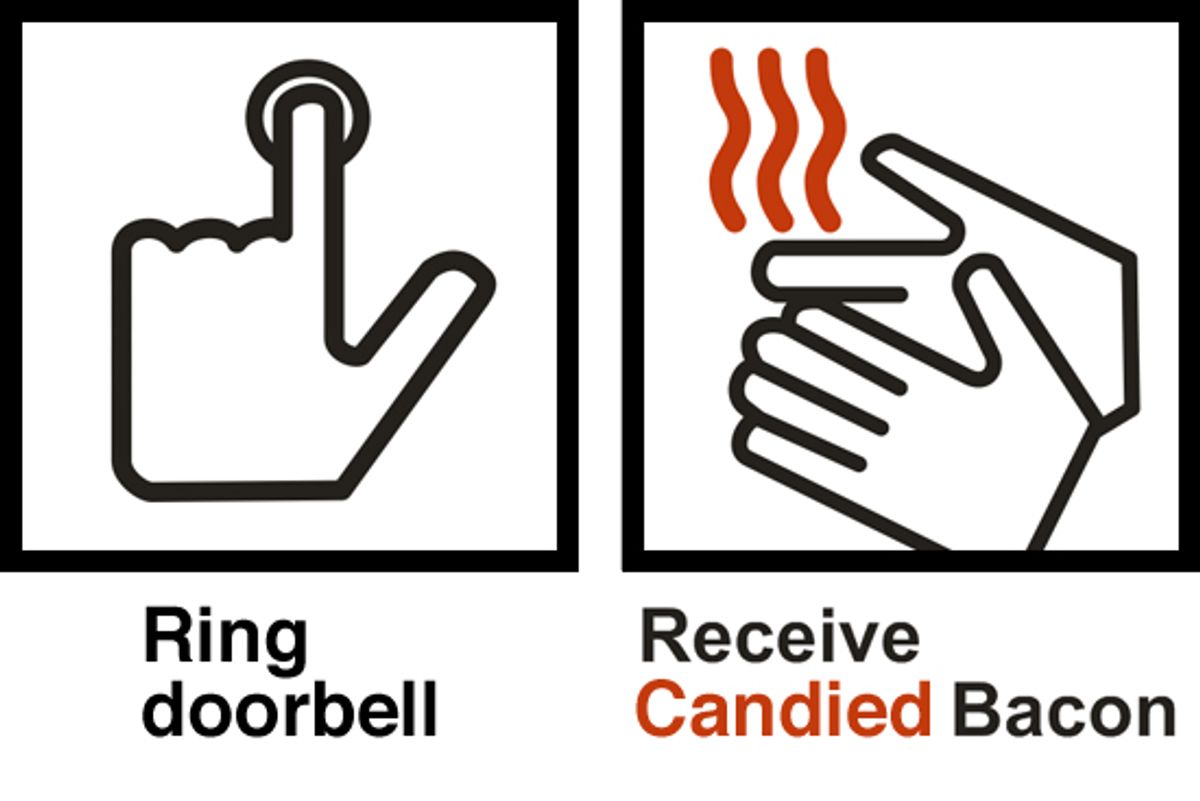 The smell of fall air — cold and clean, fading chlorophyll and smoke from a fire somewhere far away — will forever to me be the smell of Halloween. But it's been — sigh — two and a half decades since I've gone trick-or-treating, longer still since that first time out on my own, dressed up in a plastic Spider-Man suit and knocking on people's doors on October 30.

I wandered my neighborhood holding a bag, a pillowcase I took off my own bed, wondering why no one was answering their doorbell. A couple of high school kids drove by and honked, laughing, and I toddled by, my costume crinkling with the leaves. Finally, one kind woman opened her door, chuckled, dug around for a candy bar and sent me home, telling me to try again tomorrow.

Since moving out of the suburbs into college dorms and then big-city apartment buildings, I've never had the chance to pay that woman's sweet kindness forward to some other overeager and confused young trick-or-treater, so this year I've decided to spread the love to the food-reading Internets. And, since we're all grown-ups here and can make our own choices about the coronary wisdom of eating these sorts of things: Get ready for candied bacon.

Baconmania is the Food Fad That Will Not Die, and, to be honest, I'm a little over bacon getting thrown all willy-nilly over everything. But, for these — crisp, crackly, chewy, just slightly caramelly and of course smoky, salty and fatty — for these I will stop playing the jaded fool and get down with some sticky-fingered madness. The combination of textures and flavors is, well, as much a treat as Halloween candy.

The idea is simple: You cook bacon and then melt sugar onto it, which cools into a sweet, brittle shell. It works because of two things: Cooking bacon relatively slowly renders away much of the fat but keeps the meat pliable until you actually candy it, and sugar does crazy things when it gets hot. At some other point we'll get into the different stages of sugar hardness and all their cute names, like "firm ball" and "soft crack," but for now, we'll just leave it at the fact that once sugar hits 310 degrees Fahrenheit, it cools into glass. How will you know when it's gotten that hot? Well, at about 340 it starts to turn to caramel, so once its color becomes golden and then brown, it'll be fine.

The recipe makes 10 strips of bacon, which you can cut in half to make 20 little treats. But you'll probably want to make more. Many more.

Candied bacon
Adapted from the amazing Andrea Albin and her recipe for frozen peanut butter pie in the September 2009 issue of Gourmet.

Note: Candied bacon can be stored out of the fridge in an airtight container for a day, but will lose its crispness. If you want, you can precook the bacon and refrigerate it, and then candy it with the sugar the day you want to serve it.