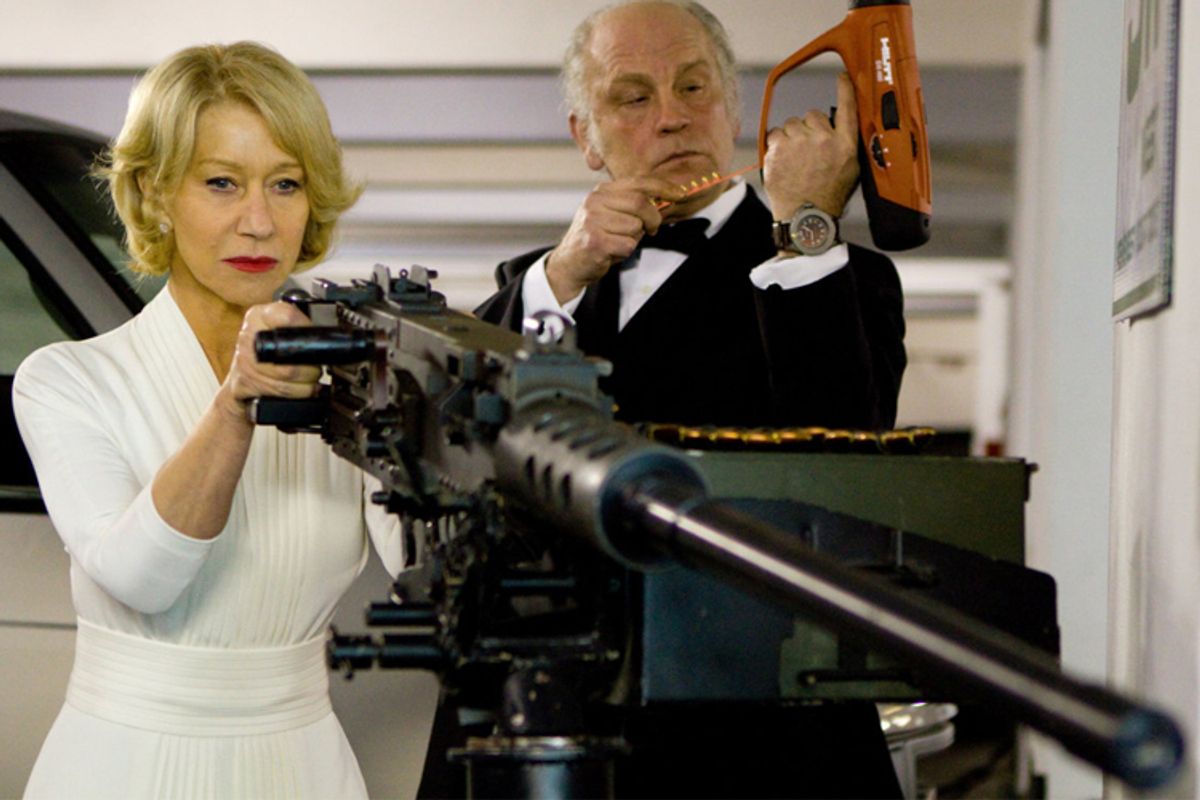 Film critics always run the risk of digging for deeper meanings below the surface of crap entertainment products (although heaven knows I would never do anything like that). In the case of a campy, clever, intentionally dumb espionage caper like "Red," which is based on an obscure DC Comics graphic novel, it's safe to say that ideology is beside the point. Still, "Red" arrives in the same year as "Salt," "The A-Team" and "Knight and Day," and tells a strikingly similar story: The military-intelligence complex has become a nexus of bureaucratic evil, and only the outcasts, retirees and traitors are fighting for truth and justice. (Yes, of course this is just this year's model of the age-old tale about individuals battling a corrupt system.)

"Red" features Bruce Willis, Morgan Freeman, John Malkovich and Helen Mirren as an improbable quartet of ex-spooks who break out the costumes and hardware for one last go-round against the powers of darkness, those being represented by the United States government. (The title is a supposed CIA acronym: Retired and Extremely Dangerous.) Whether you see screenwriting duo Erich and Jon Hoeber's anti-government paranoia as left-wing or right-wing probably depends on your own perspective, but either way it's a highly contemporary blend of cynicism and idealism.

But the cheerful nihilism of the plot, which involves buried atrocities from the 1980s "dirty war" in Guatemala and at one point sets former CIA hit man Frank Moses (Willis) on a quest to assassinate the vice president, is just a frame for the cast of aging cut-ups and director Robert Schwentke's lovingly rendered gunplay and explosions. The Hoeber brothers' list of gags range from the totally canned to the cackle-inducing, but their script is just good enough that the actors can follow its idiotic twists and turns with aplomb.

Frank Moses is one of the better ultra-deadpan tough-guy characters of Willis' mid-late career (or is it late-mid career?), and Willis finds a terrific screwball partner in Mary-Louise Parker, playing a customer-service agent he abducts into a life of dazzling espionage and violence because ... well, just because. Because he digs her, I guess. Freeman's character is an elderly lech, who's busy dying of liver cancer and ogling the female staff in a New Orleans nursing home, Malkovich plays a stereotypical off-the-grid nutjob (although he has a vastly better time here than he does in "Secretariat") and Mirren runs a B&B in rural Maryland, when she's not doing freelance assassination gigs on the side.

All those guys are a blast, and the dark-hearted idiocy of "Red" is mostly quite enjoyable. But in a sense they're all upstaged by 93-year-old Ernest Borgnine, who gets two brief scenes as a record-keeper deep in the bowels of CIA headquarters. He's seen spooks come and seen 'em go, and has no hesitation in aiding the aging renegades against the blow-dried new generation (nicely represented by Karl Urban and Rebecca Pidgeon). He clearly sends the message at the heart of all the violent and silly fun in "Red," which may not be historically accurate but is nonetheless widely shared: Things have really gone to hell, and this place ain't what it used to be.