These are the Democrats' next national faces?

If Nancy Pelosi and Harry Reid go, Democrats will need some new leaders. Hope you like old white guys 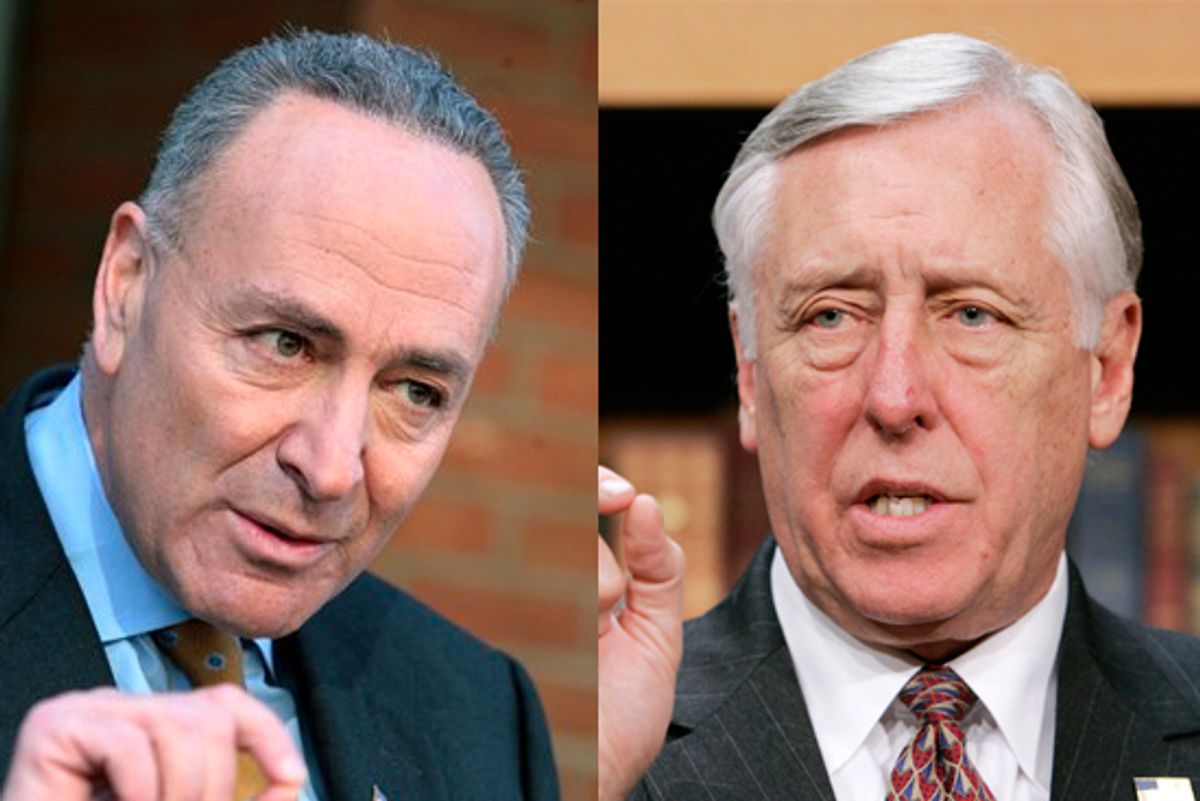 It's somewhere between possible and likely that the midterm tide will be so severe that Democrats will be forced to change leaders in both chambers of Congress. But if that happens, don't expect a blast of fresh energy and new ideas: The most likely successors to Nancy Pelosi and Harry Reid are a pair of white men with a combined 60 years of experience in Congress -- and 80 years in elected politics.

Start with the House, where Pelosi's four-year run as speaker is probably in its final months. Her San Francisco-based seat is safe, but if Democrats lose their majority, it's assumed that she'll step down as their leader (and, presumably, from Congress, where she's served since 1987). This is the tradition that her predecessor, Republican Dennis Hastert, adhered to when his party lost the House in 2006.

And even if Democrats buck the odds and hang on to a narrow majority, it's still hard to imagine Pelosi returning as leader -- especially with an increasing number of conservative House Democrats publicly pledging not to support her for speaker. She'd likely find herself in the same position Newt Gingrich faced after the 1998 midterms, when the GOP suffered unexpected losses on his watch, even as it narrowly retained its majority. Almost immediately, Gingrich stepped down as speaker and exited the House.

After Pelosi, it's hard to see Democrats turning to anyone but one man: Steny Hoyer, the 71-year-old majority leader and a favorite punching bag of the party's progressive base. Pelosi and Hoyer have never gotten along, and she's made repeated attempts over the years to marginalize him. But, ironically enough, she's the reason he's sitting so pretty right now.

The Pelosi-Hoyer story actually goes back to the 1960s, when they were both young interns in the office of Maryland Sen. Daniel Brewster. But their rivalry didn't take hold until the late 1990s, when they both began angling for various party leadership posts in the House. Between 1998 and 2001, they waged an on-and-off campaign that culminated in a contest for minority whip -- the No. 2 slot on the Democratic side at the time -- in the fall of '01. Pelosi, with the support of caucus liberals and the late John Murtha (who, moved by his personal distaste for Hoyer, delivered a bloc of unlikely supporters to Pelosi's camp), defeated Hoyer 118-95. A year later, when Richard Gephardt stepped down as majority leader to run for president, Pelosi was elevated to minority leader -- putting her in line to claim the speakership when the Democrats won back the House in 2006.

But her fierce, years-long battle with Hoyer left Pelosi constantly looking over her shoulder. As the party's leader, she relentlessly sought to insulate herself from potential future challengers, working to thwart not just Hoyer and his allies, but any younger, ambitious-seeming Democrats who showed the ability to create their own power centers within the chamber. For instance, when Hoyer's protégé, Rep. Joe Crowley, ran for the No. 4 leadership slot in 2006, Pelosi engineered a surprise backroom victory for Connecticut's John Larson, a Pelosi ally with neither the ambition nor the know-how to threaten her perch. She also tried to take out Hoyer, who'd moved into the No. 2 slot when Pelosi moved up in '02, backing Murtha's challenge to him after the party took over the chamber in '06. But Hoyer survived.

Thus, today's House Democratic leadership is comprised of Pelosi allies who simply aren’t party leader material -- and Hoyer. Had Rahm Emanuel, who parlayed his gig as DCCC chairman in '06 (a spot he won over Pelosi's initial objections) into a House leadership slot, not left the chamber to join the Obama White House, he would now be in position to exploit this vacuum; one of his dreams, don't forget, is to be speaker of the House someday. But he's not, and that pretty much leaves Hoyer.

The main question is whether Hoyer would function mainly as a bridge -- someone to hold the top slot for one Congress while the caucus decides whom to anoint as its longer-term leader -- or if he'd envision holding the spot indefinitely. He's less willing to draw ideological lines in the sand and more eager to compromise than Pelosi, as Politico recently noted.

On the Senate side, Democrats are still likely to be the majority party after November, but Harry Reid's dreadful performance in last week's Nevada Senate debate drove home the increasing likelihood that he will not be a part of it. Reid has been running dead even with his GOP challenger, Sharron Angle, since May, but it's clear that Nevada voters badly want to throw him out of office -- and it's starting to look like just enough of them will put their reservations about Angle aside and vote to do so.

Reid's demise would restart a succession campaign that was suspended (on the surface, anyway) when Angle emerged as the GOP candidate -- a development that, Democrats assumed at the time, would save Reid and ensure his return as the party's Senate leader. But if he does go down, then Dick Durbin and Chuck Schumer, the No. 2 and 3 Democrats in the Senate leadership, respectively, will almost certainly duke it out to replace him. Internal Senate elections are notoriously difficult to predict, but close Congress-watchers tend to agree that the hyper-aggressive Schumer would be favored in that race -- if only because senators will be in a mood to distance themselves from Obama, Durbin's friend and fellow Illinoisan.

Schumer, who won his Senate seat in 1998, has been positioning himself for a shot at the top slot for years. He oversaw the party's Senate campaign efforts in 2006, and when Democrats took back the chamber, Reid asked him to stay around for the 2008 cycle. But Schumer played hardball, and only re-upped after Reid created a new party leadership position for him -- which has meant that Schumer, with Durbin, has stood with Reid at every major Senate Democratic event over the last four years.

Neither Schumer nor Hoyer would make for a particularly compelling public face for the party. But hey, it's not like anyone more compelling is in line.