How propaganda is disseminated: WikiLeaks Edition

On the eve of a new leak, widely trumpeted Pentagon accusations about the whistleblowing site have proven false 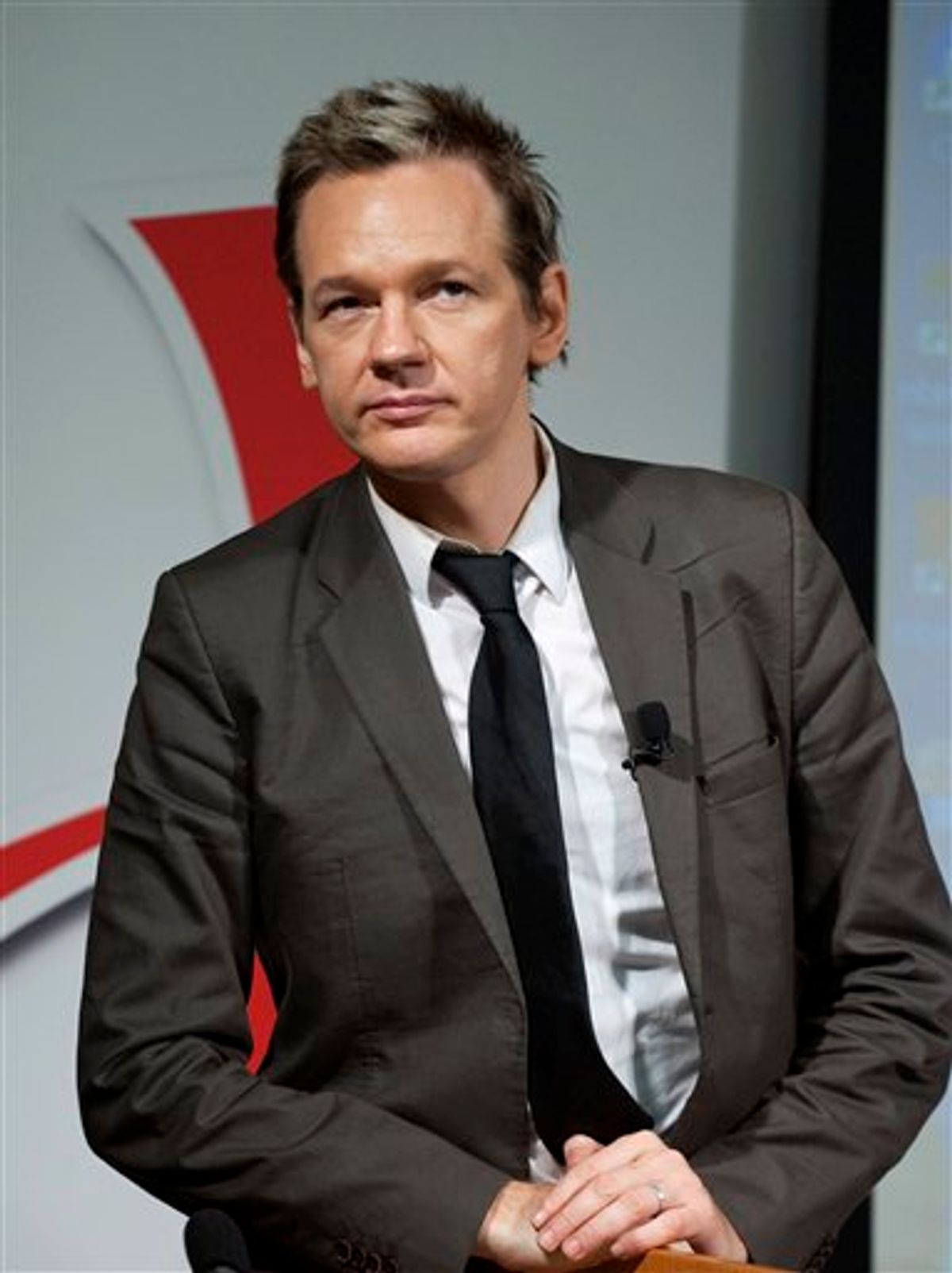 This is how the U.S. government and American media jointly disseminate propaganda: in the immediate wake of some newsworthy War on Terror event, U.S. Government officials (usually anonymous) make wild and reckless -- though unverifiable -- claims. The U.S. media mindlessly trumpets them around the world without question or challenge. Those claims become consecrated as widely accepted fact. And then weeks, months or years later, those claims get quietly exposed as being utter falsehoods, by which point it does not matter, because the goal is already well-achieved: the falsehoods are ingrained as accepted truth.

I've documented how this process works in the context of American air attacks (it's immediately celebrated that we Killed the Evil Targeted Terrorist Leader [who invariably turns out to be alive and then allegedly killed again in the next air strike], while the dead are always, by definition, "militants"); with covered-up American war crimes, with the Jessica Lynch and Pat Tillman frauds -- the same process was also evident with the Israeli attack on the flotilla -- and now we find a quite vivid illustration of this deceitful process in the context of WikiLeaks' release of Afghanistan war documents:

Top military official: WikiLeaks founder may have 'blood' on his hands

The top U.S. military officer said Thursday that Julian Assange, founder of WikiLeaks, was risking lives to make a political point by publishing thousands of military reports from Afghanistan.

"Mr. Assange can say whatever he likes about the greater good he thinks he and his source are doing, but the truth is they might already have on their hands the blood of some young soldier or that of an Afghan family," Adm. Mike Mullen, chairman of the U.S. Joint Chiefs of Staff, said at a news conference at the Pentagon. . . .

In equally stern comments and at the same session, Secretary of Defense Robert Gates said the massive leak will have significant impact on troops and allies, giving away techniques and procedures.

"The battlefield consequences of the release of these documents are potentially severe and dangerous for our troops, our allies and Afghan partners, and may well damage our relationships and reputation in that key part of the world," Gates said. "Intelligence sources and methods, as well as military tactics, techniques and procedures will become known to our adversaries."

The White House today condemned whistleblower WikiLeaks, accusing the website of putting the lives of US, UK and coalition troops in danger and threatening America's national security of the US after it posted more than 90,000 leaked US military documents about the war in Afghanistan.

LEVIN: Not yet. I think that's being assessed right now as to how many sources of information that gave us information that was useful to us are now in jeopardy. That -- that determination and damage assessment is being made right now by the Pentagon.But there quite clearly was damage.

WikiLeaks's public disclosure last week of a large number of our documents has already threatened the safety of our troops, our allies and Afghan citizens who are working with us to help bring about peace and stability in that part of the world.

Julian Assanage -- you know, molesting charges aside -- is a criminal. He broke the law.He is, you know, a murderer of American and Afghani people. His carelessness has killed people.

Wikileaks has failed to demonstrate similar discernment in handling classified records, and it will be up to others to try to repair the damage it has caused.

Dick Cheney's daughter, Liz Cheney wants the government of Iceland to stop its Wikileaks support. . . . "Our Government should make sure that Mr. Assange, Wikileaks founder and spokesman, never gets a U.S. Visa -- He has blood on his hands," Liz Cheney said.

She didn't stop there. She went on to say: "What he's done is very clearly aiding and abetting al Qaeda. And as I said, he may very well be responsible for the deaths of American soldiers in Afghanistan," she concluded.

Q: What does that do the Afghanistan war effort, and how does that put our men and women at risk?

At the end of the day I think Admiral Mullen is right. I think Julian Assange and WikiLeaks already probably have blood on their hands.

The online leak of thousands of secret military documents from the war in Afghanistan by the website WikiLeaks did not disclose any sensitive intelligence sources or methods, the Department of Defense concluded. . . .

The assessment, revealed in a letter from Secretary of Defense Robert Gates to the Chairman of the Senate Armed Services Committee, Sen. Carl Levin (D-Michigan), comes after a thorough Pentagon review of the more than 70,000 documents posted to the controversial whistle-blower site in July. . . .

The defense secretary said that the published documents do contain names of some cooperating Afghans, who could face reprisal by Taliban.

But a senior NATO official in Kabul told CNN that there has not been a single case of Afghans needing protection or to be moved because of the leak.

Let's repeat that. Despite Gates' ongoing assertion that "the initial assessment in no way discounts the risk to national security" and that "there is still concern Afghans named in the published documents could be retaliated against by the Taliban," even the DoD and NATO admit that the WikiLeaks release "did not disclose any sensitive intelligence sources or methods" and that "there has not been a single case of Afghans needing protection or to be moved because of the leak." Nonetheless, the accusation that WikiLeaks and Assange have "blood on their hands" was -- as intended -- trumpeted around the world for weeks without much question or challenge.

It's been clear from the start that -- despite the valid concern that WikiLeaks should have been more vigilant in redacting the names of innocent Afghan civilians -- the Pentagon (and its media and pundit servants) were drastically exaggerating the harms, as The Associated Press noted on August 17:

The WikiLeaks leak is unrivaled in its scope, but so far there is no evidence that any Afghans named in the leaked documents as defectors or informants from the Taliban insurgency have been harmed in retaliation.

Some private analysts, in fact, think the danger has been overstated. "I am underwhelmed by this argument. The Pentagon is hyping," says John Prados, a military and intelligence historian who works for the anti-secrecy National Security Archive. He said in an interview that relatively few names have surfaced and it's not clear whether their present circumstances leave them in jeopardy.

And on August 11, even the DOD was forced to admit to The Washington Post the complete absence of any evidence to support its wild accusations: "'We have yet to see any harm come to anyone in Afghanistan that we can directly tie to exposure in the WikiLeaks documents,' [Pentagon spokesman Geoff] Morrell said." Nonetheless, the initial spate of hysterically accusatory rhetoric, combined with the uncritical media dissemination, poisoned public opinion about WikiLeaks, and the fact that those accusations have been subsequently revealed as baseless will receive little attention and undo none of that deceit-based damage.

The benefits to the Government from spewing baseless accusations against WikiLeaks are obvious: they inure the public to the thuggish steps being taken to cripple and otherwise intimidate the whistleblowing site from exposing more government secrets about the truth of our wars. WikiLeaks' American spokesman, Jacob Appelbaum, was detained for hours at the airport when entering the U.S. in August, had his property seized (his laptop and cellphones), and was threatened with similar treatment each time he re-enters the U.S., and the following day was interrogated by FBI agents at a conference at which he spoke in New York. This week, WikiLeaks was notified that the service it uses to collect online donations "had closed down its account because it had been put on an official US watchlist and on an Australian government blacklist." And, of course, both the organization itself and Julian Assange have been repeatedly and publicly threatened with prosecution.

The effort to smear WikiLeaks is a by-product not only of anger over past disclosures, but fear of future ones as well. As CBS News reported yesterday: "The Pentagon is bracing for the possible release of as many as 400,000 potentially explosive secret military documents on the U.S.-Iraq war by WikiLeaks. The self-described whistleblower website could release the files as early as Sunday. . . . part of the fear about the potential release is the unknown: Defense officials are not sure exactly what documents WikiLeaks has."

Whatever else is true about this latest release (and future leaks by WikiLeaks as well), substantially greater caution is obviously warranted when assessing and repeating Pentagon accusations about the damage caused by these new documents and the supposed recklessness of WikiLeaks in releasing them. But that is unlikely to happen. If our established media is governed by any overarching principle, it's this: when the U.S. military speaks, its pronouncements -- especially in the beginning -- are to be respected, believed and repeated without question or challenge no matter how many times that deference proves to be unwarranted.

In order to combat the Obama supporter claim that his failures are due to an obstructionist Congress, Jane Hamsher has been asking various people to identify steps which Obama could take now to address various problems that require no action from Congress. My response is here; Alan Grayson's is here; James Galbraith's is here; Bill Black's is here.