Anonymous cowards are buying the 2010 election

TV, radio stations cashing in on attack ads from shadowy groups, mostly aiming at Dems. We must pursue their names 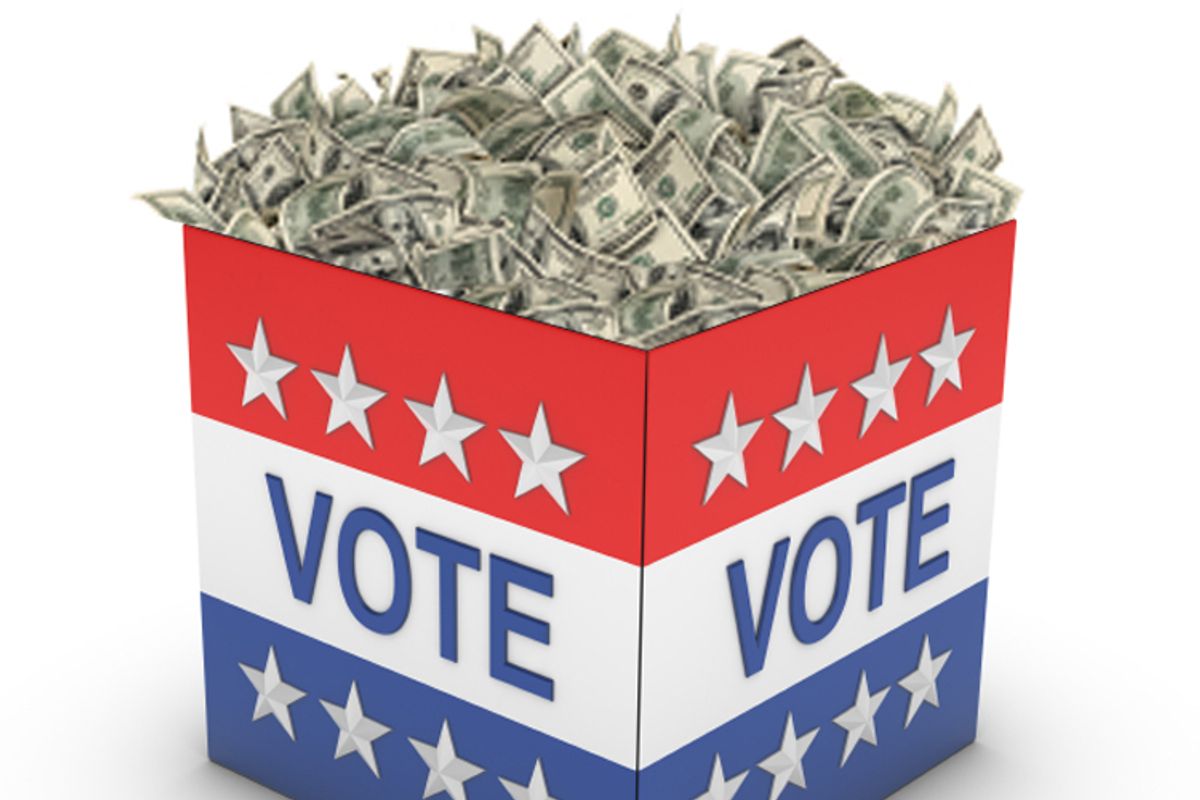 It's beginning to penetrate the public consciousness that the 2010 elections are being purchased, mostly for Republicans, by a shadowy group of wealthy cowards. These anonymous buyers are pouring hundreds of millions of dollars into attack ads, mostly against Democrats, via organizations that launder their money into an increasingly corrupt political system.

There's not much anyone can do about it during this election cycle. The response time of the people being attacked has been slow, at best, while journalists have been in typical form, discovering the problem too late to matter. The campaign season is essentially over, and what was plainly going to be a big Republican gain could well become a rout, no small thanks to the opinion launderers and their paymasters.

But unless we want our nation to be entirely governed by puppets, on strings wielded by people who stay entirely in the shadows, we'll need to find a way to put a hard stop to this -- or force the anonymous cowards into the open where we can learn who's doing the manipulating.

My short-term, personal response to the attack ads, and the one I hope you're adopting (as I suggested several weeks ago) has been to treat them exactly the way I treat anonymous comments on news sites and blogs: Someone who is so cowardly that he attacks others anonymously doesn't just deserve to be ignored; he invites active disbelief. Even the political organizations that do disclose their donors rarely do so in a timely way, so I've come to treat all attack ads as lies.

Maybe Congress will act, but probably not. The political class is most culpable in this growing offense against our republic's bedrock, fair elections. A bill in Congress, called the DISCLOSE Act, has languished due to the opposition of Senate Republicans who say they'll filibuster against it, and who have tacit collaboration from Democrats -- always hypocritical on these issues, but never mind that -- who never actually force Republicans to actually filibuster, that is, stand up and talk for hours or days on end.

Journalists, by and large, are nowhere near up to the task of sorting out truth from lies in this media avalanche, and they barely care enough even to attempt to learn who's behind the onslaught. A few news organizations have devoted some resources to the issue during the past few weeks, such as the New York Times, NPR and Rachel Maddow's team at MSNBC. Naturally, there's been near-silence from the media companies profiting the most from the lies, namely the local TV and radio stations that have been absolutely raking in cash this summer and fall.

The American public knows something is wrong. Several new polls show a deep unease with a system that allows anonymous but wealthy cowards to pollute the airwaves with their lies and deceptions. But if people don't have a clear sense of how vast this pollution has become, it's because they haven't been given the data.

One way we could begin to get a grip on the size of the spending at local levels -- apart from anecdotal guesswork -- is to look at what broadcasters are raking in from the opinion launderers. Every local station is required by federal law to keep logs of political ad spending. NPR looked at stations in Pittsburgh last week, and in an unsurprising finding, reported major spending on behalf of Republicans by shadowy groups. From the show's transcript:

PETER: So the groups are filing their paperwork with stations but they're not taking it very seriously.

Some answer a few questions, most leave the important lines blank. It's an indication that TV stations can't act as a watchdog of these groups.

ANDREA: This is where the trail goes cold. We called some of the groups behind these ads. They either said they were busy, they're complying with the law, or they didn't call us back at all.

And they don't have to. For most of these groups there's almost nothing required in terms of donor disclosure. They can keep their funding sources comfortably hidden.

But from sifting through the public files at two Pittsburgh TV stations we did learn a few things.

PETER: We learned that these groups are spending amounts of money that were unimaginable just a few years ago. One group can easily spend $100,000 or more at one station, in a few weeks.

Multiply that by four or five local stations in each area, and five or six groups spending at that level, and the amount of money flowing from secret sources to fund attack ads across the nation is easily in the hundreds of millions of dollars.

But how can we, as a nation, get the actual number? What we need is a compilation of every station's logs. And while no single media organization could possibly do such a project on its own, and it's obvious that local media outlets aren't doing it themselves, there are ways to pull this data together -- and the best way is to crowdsource it.

If I could be media czar for a day, I'd get every newspaper behind this project:

That's the easy part, unfortunately. Learning how much is being spent, and on whose behalf, won't uncover the names and businesses of the anonymous cowards who are pouring so much cash into buying a new Congress. But perhaps, just perhaps, wider understanding of the vastness of this enterprise would generate sufficient public outrage to force some changes later on.

It's getting harder to be optimistic about our future. I fear that the corruption of the public sphere has become so overwhelming, and the public's helpless acceptance such a dead weight for reform, that no amount of disclosure will help.

But if we don't even try, we're lost.