As Nucky prepares for a dreaded St. Patrick's Day dinner, the widow Schroeder considers a betrayal 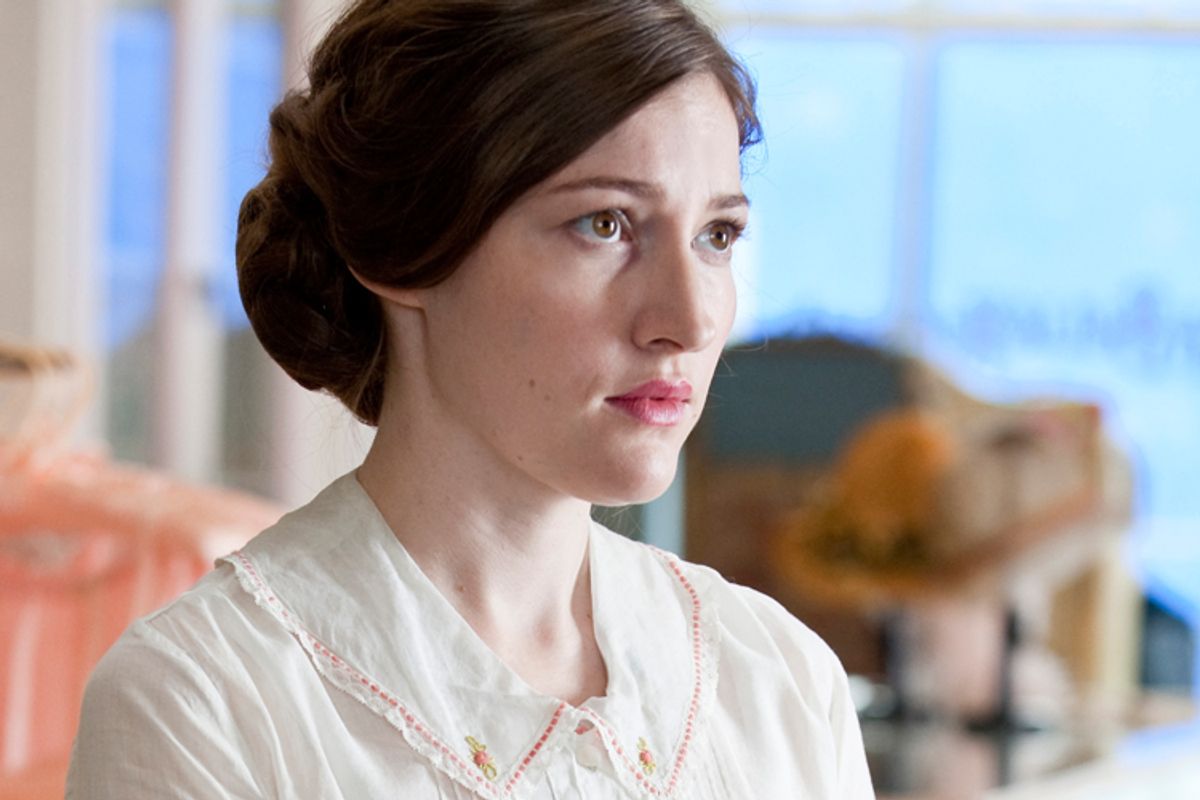 Nucky Thompson is in a bad mood. In last week’s episode, he threw himself a lavish birthday party, a booze-soaked bacchanal full of friends and allies. But this week’s episode, "Nights in Ballygran," builds to a far less festival and colorful celebration, an annual Celtic Dinner for power players of Irish descent. The occasion, of course, is St. Patrick’s Day, which then as now doubles as a celebration of Irish history and an all-purpose excuse for extreme drunkenness. You’d think the king of Atlantic City’s considerable trade in bootleg liquor would welcome such a business opportunity, but Nucky looks forward to the Celtic Dinner as a man does his own hanging. "We’re a sorrowful people," his brother Eli explains, by way of explaining the Irish love of a good drink or four. "Maybe it’ll snow," Nucky counters, in a tone suggesting that he knows it won’t.

Thus far, we’ve seen Nucky as the consummate politician, as eager to help a cutlery salesman as a U.S. Senator, knowing that both contribute to keeping the machinery of profit running smoothly. The real Nucky (whose name was Johnson, not Thompson) was a massive, physically imposing figure, one "Boardwalk" creator Terence Winter has said was more akin physically to James Gandolfini than Steve Buscemi. As HBO’s most heavily promoted drama since "The Sopranos," "Boardwalk" was doomed to be measured by that formidable yardstick, a comparison Winter wisely opted to mute by casting an entirely different type of actor. Deviousness, not brute force, is Buscemi’s stock in trade. Nucky is less weaselly than many of Buscemi’s lowlifes, but he’s still someone who gets his way through a combination and judiciously applied pressure rather than outright threats. He can be goaded, as by the presumptuous power grab of Arnold Rothstein, but he doesn’t like to fully unsheath his sword.

We’ve only seen him lose his temper a few times, include last week, in a backroom meeting with Senator Edge and the mayor of Jersey City. Nucky was angling for highway funding, both to facilitate the ingress of moneyed city folk and to take his cut — not insubstantial, one imagines — off the top, but Jersey City refused to lie down, mumbling some jive about how north Jersey needs roads, too. It wasn’t the fact that he was obviously looking for a payoff that enraged Nucky so much as the clumsiness with which he did it, and the fact that he forced Nucky to actually ask him for a number.

Perhaps it’s the unglamorous nature of the Celtic Dinner that has Nucky in the dumps; when we finally get there, it’s a dimly lit affair in drab greens and browns, a far cry from the dazzling spectacle of Nucky’s birthday fete. Or perhaps it’s the presence of his father, whom we know almost nothing about, but can glean that Nucky considers something of an embarrassment. Or perhaps it’s the specter of age, and the connection to the old country. Nucky explains to Eli that he’s moved the dinner up an hour to prevent the Civil War veterans from falling asleep during the evening’s speeches, and the episode’s title comes from the song "Carrickfergus," a nostalgic memory of Ireland that doubles as a deathbed lament. Nucky is powerful, but he’s not young, and no amount of money can stave off the ravages of age. Given that he still palpably mourns the death of his young wife, he’s also someone with a vested interest in not looking backwards.

At any rate, he’s in a foul mood, a condition that precipitates most of the episode’s plot. When the widow Schroeder brings him some homemade soda bread as a belated birthday gift, he cooly instructs her to leave it with the hotel bellman, and dismisses her with the excuse of an urgent meeting. She’s stung deeply enough by his rejection to chuck the bread in the trash and seek company in her comrades in the Woman’s Temperance League, with whom she shares the news that she has been awakened by men loading barrels of illicit beer into a garage across the street from her house. While she may not know the extent of Nucky’s corruption, and surely has no idea that he ordered her husband’s murder, she danced with him in a ballroom full of high-ranking politicians freely imbibing illegal liquor, so she knows that he at the very least countenances that particular brand of law-breaking. But she nonetheless tells her very fellow drys that she can secure Nucky’s help in doing away with these neighborhood stashes. "He’s a friend," she says innocently.

When she and the head of the Temperance League drop by Nucky’s office, he slyly reminds Margaret of their dance. She counters, asking how he enjoyed the soda bread. Delicious, he says, unknowingly throwing salt in the wound. She gives him one more chance, dressing up in her best outfit, including the silk camisole she shoplifted from her job at the dress shop, but this time he won’t even see her, keeping her waiting as the sounds of revelry pour from his office.

As she’s waiting, Margaret sees an Alderman join the party in Nucky’s office, the same one she saw overseeing the unloading of the beer barrels across the street. So after she stops by her house to tear the camisole to shreds, she pops in on Agent Van Alden, who’s only too pleased with the chance to ruin Nucky’s party. The scene in Van Alden’s office — which, we’re reminded once again, is a makeshift bureau set up in the city post office — touches on an issue we’re sure to see more of: the (in)efficacy of prohibition. When Margaret first tells Van Alden about the beer, he all but laughs her off, pointing to a map with more than a hundred such spots all over the city, ten times more than his paltry staff could ever raid. As his mouth starts to water with the thought of busting Nucky, Margaret hesitates briefly, just long enough to ponder the fact that she’s helping Van Alden to crack down on behavior that was legal only months before. "What of the law that creates the criminal?" she asks him. He responds. "That is the law you’re asking me to enforce."

As it turns out, the raid is a blessing in disguise. The Celtic Dinner has already turned chaotic, after Eli’s misguided attempt at electioneering sparks a chauvinistic brawl between recent Irish immigrants and their American-born counterparts. Nucky calms the crowd with a few ethnic jokes and ushers in the midget boxers, who have been costumed as leprechauns for the occasion, but the police barge in and arrest Margaret’s alderman, ushering the rest into the street and padlocking the door, as photographers — alerted in advance by Van Alden, no doubt — snap pictures of Nucky’s humiliated guests. (If he weren’t busy doing damage control, Nucky might enjoy the moment.) He spots Margaret in the crowd, loudly singing a temperance hymn, which prompts a late-night visit to her house. "I’ve no patience for games, nor any interest in them," he tells her, after which they launch into a passionate kiss, and the crowd goes wild.