Does Mike Huckabee know he can't win in '12? 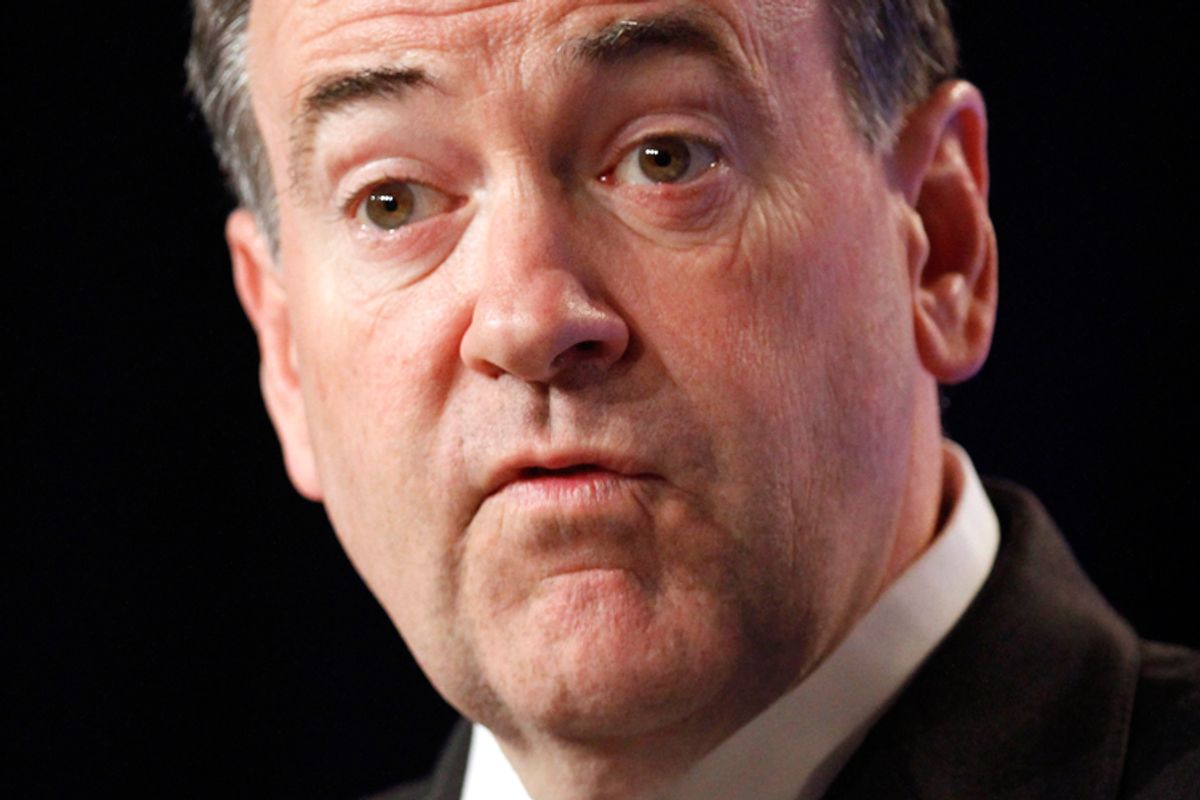 This is logical enough: Mitt Romney has some serious problems with the GOP base and he's starting to feel like yesterday's news, Sarah Palin may not run (and even if she does, there's still reason to doubt whether she could actually win the nod), and the rest of the field is either too polarizing (Gingrich) or too bland and anonymous (Pawlenty, Daniels, Thune). Against this competition, Huckabee seems like the perfect combination of base-friendiness (thanks to his religion, Southern roots and distance from D.C.) and marketability; say what you will about his politics, but he knows how to make a favorable personal impression.

But Sunday's Seattle Times featured an exhaustive reminder of why Huckabee may not be able to win the nomination either, thanks to the generous prisoner clemency policy he pursued as Arkansas' governor. The paper explored the saga of Maurice Clemmons, an Arkansas inmate who was paroled in 2000 when Huckabee slashed his 108-year prison sentence. Clemmons went on to kill four police officers in Washington state last year, before being gunned down by a Seattle cop.

As Ben Smith notes, some of the details reflect positively on Huckabee's sense of compassion and fairness:

"He saw that everyone makes mistakes, everyone can be rehabilitated," says Cory Cox, Huckabee's clemency adviser for two years. "He believed racism is real, especially for people sentenced in the 1960s and 1970s who got disproportionate sentences based on the color of their skin."

Huckabee, a Republican, displayed a willingness to brave voter backlash. "If one acts by pure raw political instinct and a pure Machiavellian approach to public office, you'll never, ever, ever, ever, ever grant clemency," he once told a Little Rock audience. But Huckabee said he didn't take his cues from Machiavelli.

While Clemmons' 108-year sentence probably was excessive (he was convicted of a series of crimes, the most violent of which involved punching a woman in the face), his prison record -- 29 disciplinary actions in the year prior to his clemency request -- belied his fervent claims of rehabilitation. Huckabee, the story makes clear, was essentially taking a blind gamble in hastening his parole.

By itself, the Clemmons case, which first made news with his killing spree last year, is enough to threaten any GOP nomination hopes Huckabee still harbors. But it's not an isolated example. The case of Wayne Dumond, a convicted rapist who also won parole under Huckabee only to commit a rape and murder in Missouri several years later, haunted him during his 2008 campaign. These two cases, along with some eyebrow-raising statistics (Huckabee granted more than twice as many clemency requests as his three gubernatorial predecessors combined), will give any GOP primary opponent in '12 some serious ammunition.

This may explain why Huckabee has taken to television so aggressively. He's got a Fox News show and has taken a shot at daytime talk, too. Some who know him privately say they doubt he'll run; they also note that he seems to be putting back on the weight that he lost prior to his '08 run. It may just be that he knows the grief that his clemency history will cause him in the GOP primaries and has decided not to subject himself to it.