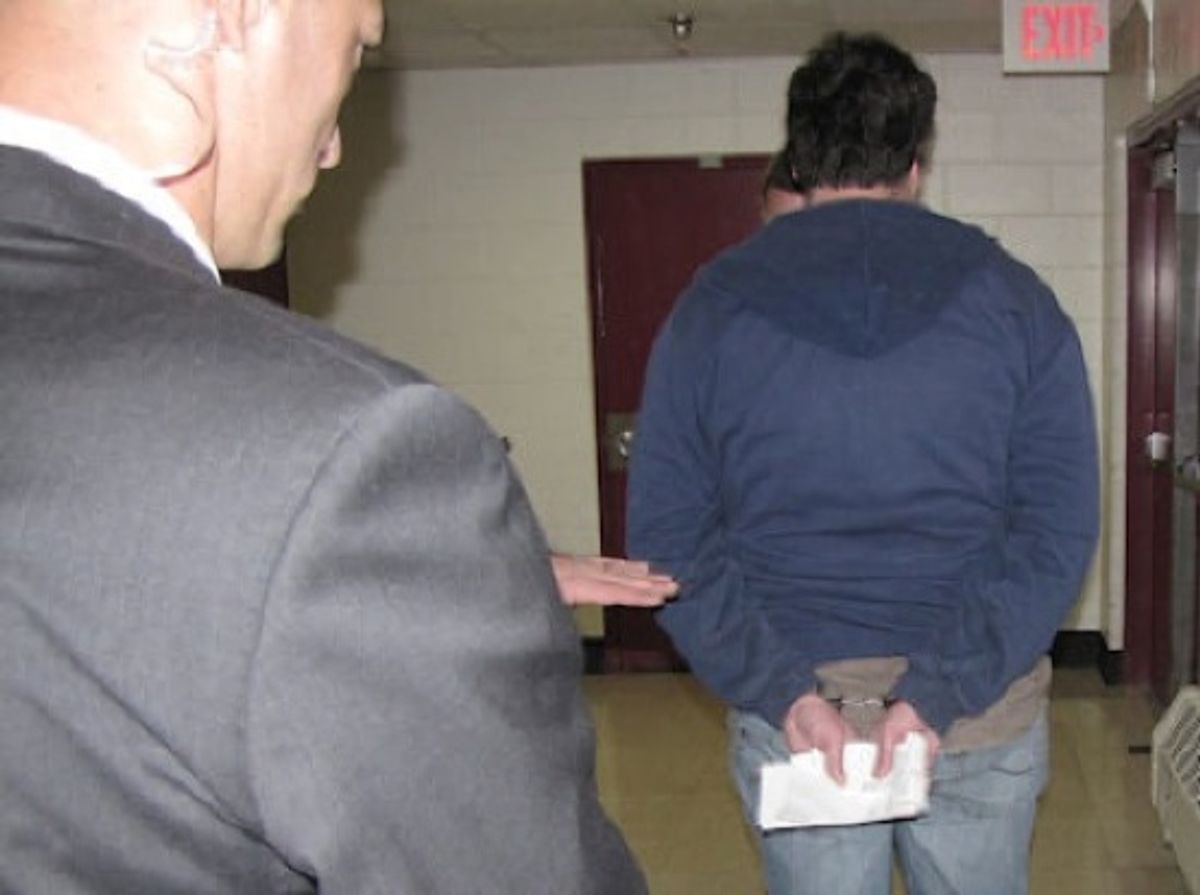 (UPDATED) Private security guards working for Joe Miller, the Tea Party Senate candidate who defines himself as a constitutional conservative, handcuffed and detained the editor of an Alaska news website who was attempting to ask Miller a question at a public town hall event Sunday.

Tony Hopfinger, editor of Alaska Dispatch, says he was thrown against a wall and handcuffed by men wearing suits with Dropzone Security Services, which is employed by the Miller campaign. He had been videotaping the event and trying to ask Miller a question about his checkered employment history as an attorney at the Fairbanks North Star Borough, which Alaska Dispatch has been reporting on.

The Anchorage Daily News has a good rundown of the conflicting accounts of what happened:

Hopfinger, who was holding a small video camera, said he was attempting to draw out a statement from Miller on why he was disciplined by the Fairbanks North Star Borough when Miller worked there as a part-time attorney. After Miller walked away, Hopfinger said, he was surrounded by Miller supporters and security guards and felt threatened, so he pushed one of them away ...

Hopfinger said that after he shoved the man away, the guards grabbed him, cuffed his hands behind his back with steel handcuffs and sat him in a chair in the school hallway ...

While Hopfinger was still in handcuffs, the guards attempted to prevent other reporters from talking to him and threatened them too with arrest for trespass.

Also of interest: Hopfinger says someone erased from his video camera the segment of Miller he had been recording. The Miller camp has released a statement maintaining that Hopfinger was detained for shoving someone and dismissing him as an "irrational blogger."

A photo gallery of the episode from Alaska Dispatch is here.

UPDATE: Hopfinger told Salon this morning that while his lawyer said he could pursue legal action, he's more interested in getting his questions answered by Miller.

"Right now it's more about if Mr. Miller would answer questions about his background. And it's the same with other media around the country who are trying to get their questions answered," Hopfinger said.

He said that Miller supporters at the event Sunday swarmed around him as he was asking Miller about reports that Miller was reprimanded for politicking on the job when he worked for the Fairbanks North Star Borough. Miller announced a week ago that he would no longer answer questions about his past. And, like fellow Tea Party Senate candidates Sharron Angle and Rand Paul, Miller has granted few interviews with local news sources.

"If you are running for office -- a six-year term -- you should probably expect that you're going to be asked some questions about your past," Hopfinger said. "I think local and national media need some backbone when dealing with these candidates who do not want to talk."