The star says the superstore chain banned his album cover. But the truth may be more complicated 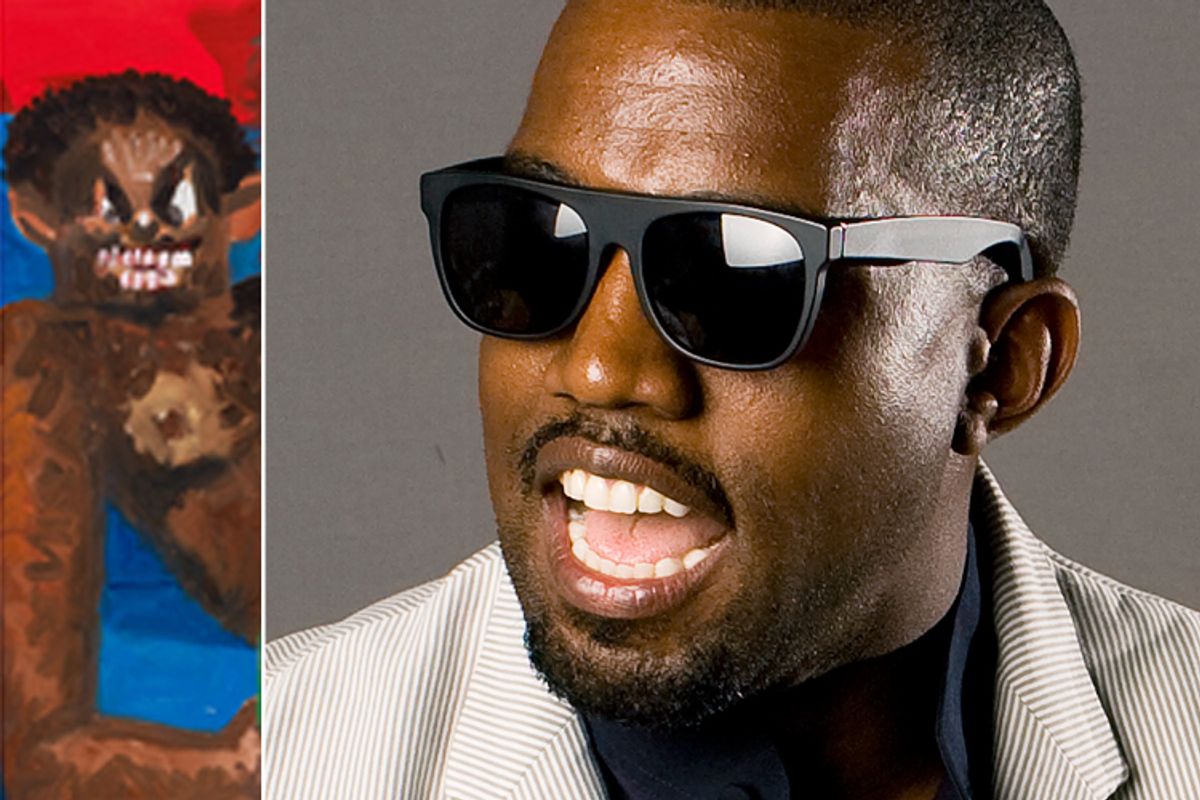 If you call your new album "My Beautiful Dark Twisted Fantasy," you're setting up expectations that things are going to get a little weird. And if you're Kanye West, you're going to deliver on them. Say, is that an armless naked angel with polka dots coming out of her rear end, mounting a Kanye-like demon on the cover? Wal-Mart, we have a problem.

"Dark Twisted Fantasy," which doesn’t release for another month, is all but assured of becoming one of the biggest albums of the year. The ever-colorful West has already scored two hit singles off it, the hypnotically gorgeous "Power" and "Runaway." And his arresting recent performances on the MTV Video Music Awards and "Saturday Night Live" -- along with his continued uh, outspokenness -- have whipped up a nice froth of potential retail frenzy.

But on Sunday, it appeared the chorus of ca-ching ca-ching was to be abruptly overdubbed with the sound of screeching brakes, when West cryptically tweeted "Yoooo they banned my album cover!!!!!" Soon after, he posted an image of "me chilling on the couch with my phoenix" -- the aforementioned surreal tableau -- and told the universe, "I really don't be thinking about Wal-Mart when I make my music or album covers #Kanyeshrug!" (#Kanyeshrug, meanwhile, just entered the hashtag Hall of Fame.)

The image, by painter George Condo, would certainly be an unusual choice for, say, one's holiday card, but it's entirely within the West aesthetic. Condo did the art for the "Power" single -- a portrait featuring the rapper sporting, appropriately, four big mouths, and a version of the "Runaway" cover as well. But ballerinas and big mouths are one thing -- what's going on between that grinning figure holding a bottle and his winged lady friend is a whole other kettle of Kanye. Nevertheless, it is a painting, and a not terribly explicit one at that.

What is it about the image that could so ruffle the family-friendly Wal-Mart empire? Is it the rosy nipple on the angel creature? The suggestion of miscegenation? The possible endorsement of alcoholic consumption? That thing clearly coming out her butt? Kanye despairingly tweeted, "So Nirvana can have a naked human being on they cover but I can't have a PAINTING of a monster with no arms and a polka dot tail and wings." But tails don't grow in cracks, Kanye. And Wal-Mart, by the way, doesn't currently sell "Nevermind." (The crotch shot known as "Sticky Fingers" is still however deemed acceptable.)

Soon enough after his Sunday tweetfest, the Kanye cover became the most scrutizined image of a weekend devoid of significant celebrity nip slips. The Hollywood Reporter teased readers to "See the Kanye West Album Cover Banned From Wal-Mart." And while Todd Martens of the Los Angeles Times wrote that "perhaps 'banned' isn't the right word," he reported that an anonymous insider confirmed that West had been "strongly" encouraged to come up with a different cover. " At issue, said the high-placed industry source, was whether or not mass-market retailers such as Best Buy and Wal-Mart would carry an album featuring venomous nudes, and one that would no doubt inspire controversy." Calls to Wal-Mart by Salon Monday were not returned.

Yet the most Wal-Mart averse image on that album cover may not be George Condo's freaky painting. There's something far more interesting going on in the bottom corner. It's the words "Parental Advisory: Explicit Content." Wal-Mart doesn't carry products that have the parental advisory designation, ever.

Both West's earlier "Late Registration" and "Graduation" are sold in Wal-Mart only in their edited, cleaned-up versions. So West clearly knows his way around the big box stores and their restrictions. One has to wonder then if the man who claimed yesterday that "I wanna sell albums but not at the expense of my true creativity" was being a mite disingenuous. He didn't mind, after all, having the copious profanity of "Runaway" muted out during his "SNL" performance.

Perhaps West knows something we don't. Perhaps executives at Wal-Mart are indeed right this minute fanning themselves in maidenly horror at the cover image of West's forthcoming album. Or maybe there's nothing like an old-fashioned censorship controversy to pique interest in whatever is The Man is trying to hide. If West wants people to listen to what's inside his album, why not drum up some extra attention by doing what he does best -- picking a fight? Cue to 24 hours after his initial tweets, and the new album has been mentioned on every entertainment column in the country. Kanye may be dark, twisted and occasionally out of his mind, but as his latest attention-getting stunt proves yet again, he's still a freaking genius.