Obama draws the wrong lesson from his woes 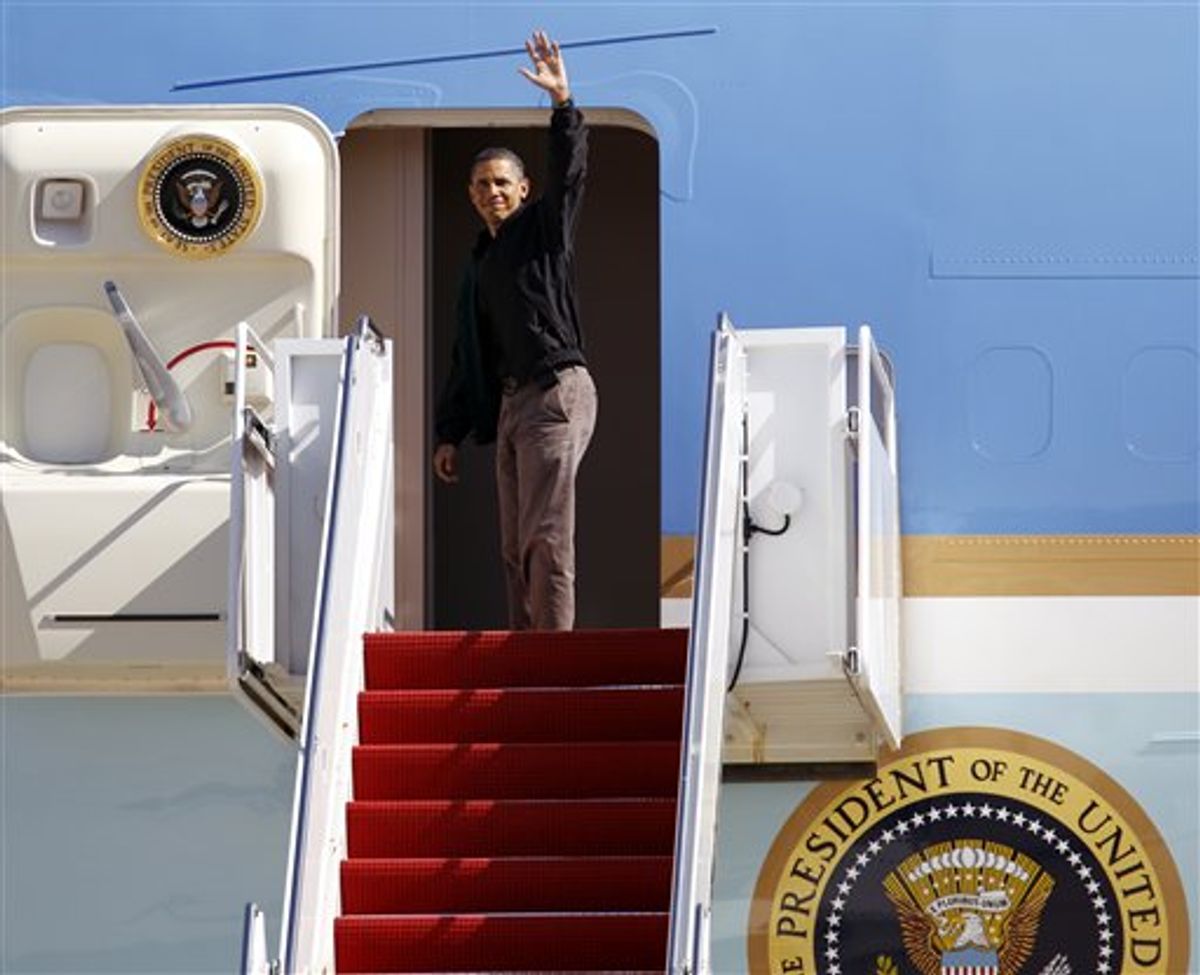 President Barack Obama waves from Air Force One before departing at Andrews Air Force Base, Md. on Sunday, Oct. 17, 2010, on route to to Ohio for an pre-election rally. (AP Photo/Jose Luis Magana) (AP)
--

I've got to congratulate my friend Arianna Huffington for the shout out she got from President Obama, in Peter Baker's New York Times profile Sunday. Giving Baker a tour of his newly redecorated Oval Office, the president pointed to the coffee table that won't get marked by water rings, and the bust of Martin Luther King Jr. that replaced Winston Churchill, but noted, rather surreally, "I know Arianna doesn't like it."

Yes, it's true that Huffington, like a lot of folks, questioned the decision to redecorate in a time of economic suffering for many Americans. But the idea that the celebrity media-maven's redecorating criticism takes up even a tiny bit of space in Obama's brain is a little bit scary. Take on Republicans in Congress; rebut progressive critics like Paul Krugman, or even Huffington herself on her many substantive challenges to White House policy moves. Obama's taking the time to rebuke Huffington on her redecorating critique may reflect worse political judgment than his decision to update his office in the first place.

Of course, Obama didn't write the lede to Baker's article, and I bet he winced when he read it. Certainly the president and his aides had more important things to say, and complain about, in Baker's widely discussed "The Education of President Obama." Unfortunately, even when the Obama team is complaining about substantive issues, it feels like they're missing the real lessons of the last two years, and they're in danger of drawing the wrong conclusions when Republicans do well in the upcoming midterm showdown.

A couple of points jumped out at me. The first is that the president and his circle still claim to be shocked that "Washington culture" is as tough and immutable as it is. That gives all of Obama's critics – and even some admirers – who wondered if he was ready for the job in 2008 a little bit more validation. I certainly hoped candidate Obama's starry vision of bipartisanship was aspirational, and that behind it, he was ready for the kind of GOP assault that greeted President Clinton in the 1990s. It seems from Baker's piece at least that he was not.

I was happy to see Obama tell Baker that he's reading Taylor Branch's terrific book, "The Clinton Tapes," based on many hours of private conversation and observation by the civil rights historian during the grueling eight-year administration. But Obama seems to take solace, according to Baker, in the fact that Clinton's popularity dropped sharply in his first term even though unemployment was a relatively low 6.6 percent. "And I don’t think anybody would suggest that Bill Clinton wasn’t a good communicator or was somebody who couldn’t connect with the American people or didn’t show empathy," Obama tells Baker – and I detected a little bit of Clintonian self-pity in his assessment.

The president seems to be missing the real point of Branch's book, as I wrote about "The Clinton Tapes" exactly this time last year: "Clinton faced a GOP that was, 15 years ago, already the party of "No," already convinced that the only way back to power was thwarting a sitting Democratic president." Republicans were abetted by "a small conservative cadre of Democrats in the Senate Finance Committee, [who] blocked Clinton’s efforts at healthcare reform: specifically, current Obama headaches Max Baucus and Kent Conrad, plus former senators John Breaux (a healthcare lobbyist today, no surprise) and the frequently useless Democrat David Boren of Oklahoma."

I certainly hope Obama gleans more wisdom from Branch's book, because as his White House looks to a future where Republicans will certainly have more power, he and his people continue to dream of Republican cooperation – and we all know how that turned out for Clinton. And yet, asked by Baker to name Republicans "he trusted enough to work with on economic issues," Obama managed to come up with only two. But even those choices were alarming. One was retiring Sen. Judd Gregg, who accepted Obama's offer to become Secretary of Commerce early in the administration, and then reneged. Obama trusts him? Anyway, Gregg is retiring. The other is Rep. Paul Ryan, who is widely admired by Beltway figures who see seriousness both in his nerdy demeanor and the fact that he actually puts forward economic proposals, unlike the rest of the Party of No. But those proposals would cut taxes in half for the top 1 percent of Americans, slash spending, and move toward privatizing Medicare. On what basis could the president trust Ryan enough to work with him on economic issues?

Finally, Baker quotes former Senate Minority Leader Tom Daschle, who would have been Obama's secretary of Health and Human Services if he hadn't run into tax problems related to his health-industry lobbying career (which probably should have excluded him from the Cabinet in the first place.) Daschle advises the president to reach across the aisle. "The lessons of the last two years are going to be critical," he told Baker. "The key word is 'inclusion.' He’s got to find ways to be inclusive." Really? Is Daschle suggesting that the politically worthless summer of 2009, when the bipartisan Gang of Six, led by Max Baucus and undermined by Chuck Grassley, paralyzed the healthcare reform process, wasn't enough inclusion?

Thankfully, Pennsylvania Gov. Ed Rendell tells Baker he disagrees, and advises Obama: "Don’t care so much about bipartisanship if the Republicans continue to refuse to cooperate. Do what you have to do. Fight back." Obama's been much closer to Daschle than Rendell (a Hillary Clinton backer) since the South Dakota Democrat backed his presidential bid early on, but I hope he takes the Pennsylvanian's advice. President Clinton tried cooperating with the GOP after his disappointing midterms, and they impeached him for his "inclusion." It's probably too late for Obama to influence what voters do two weeks from Tuesday, but he can control what lessons he derives from the results. Baker's article made me worry about the wisdom of those lessons even more than I had before.