Obama finds support from the right 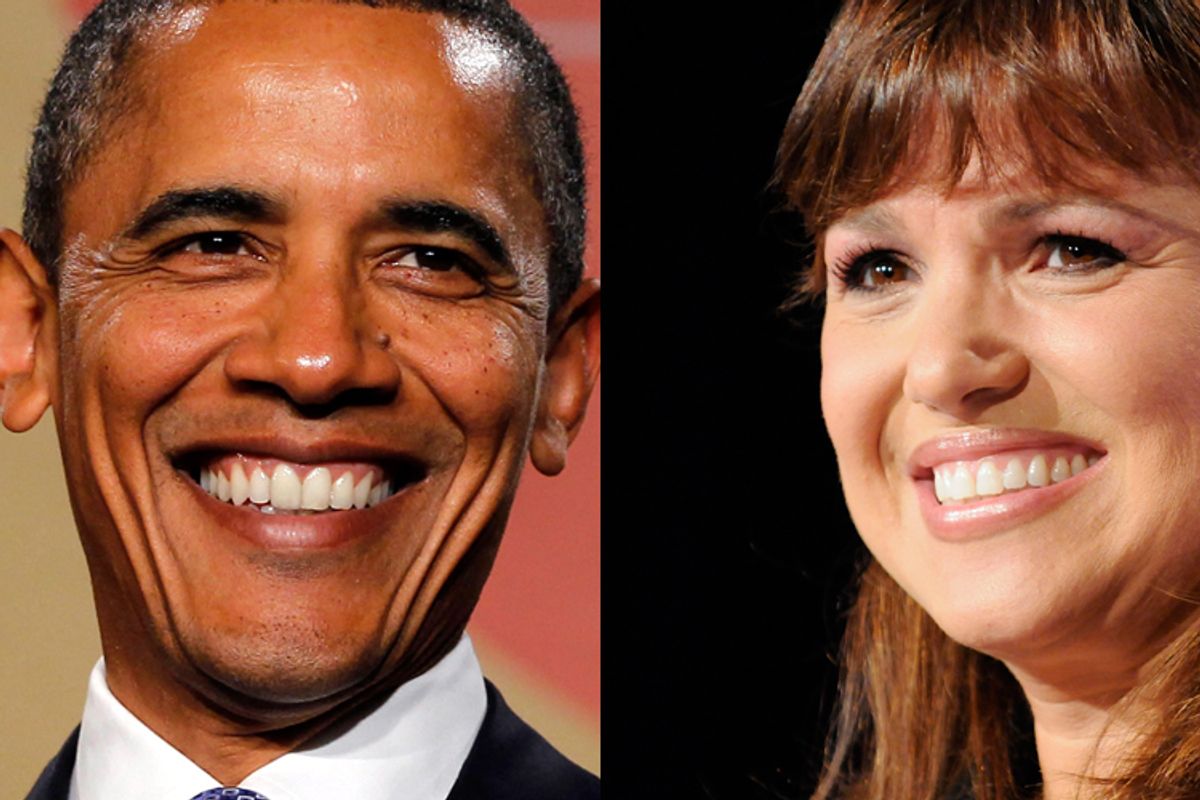 All decent, Serious people consider GOP Delaware Senate candidate Christine O'Donnell to be the Wicked Witch of the East, one of the nation's greatest and most consequential menaces. As but one of countless examples, the highly accomplished Megan McCain was on the roundtable of ABC's This Week program yesterday, mocking O'Donnell's lack of accomplishments and explaining that her "group of friends" consider O'Donnell to be a "nut job" and "scary." Last week, the Evil Witch participated in a debate with her opponent, Democratic nominee Chris Coons, and said this:

There are many things that I have publicly said that I support the Obama administration on.

I've been a long-time skeptic of the claim from Obama supporters that he would usher in an era of post-partisan harmony, enabling America to transcend its divisive, partisan political conflicts by commanding support for his policies across the political spectrum. In January, 2009, for instance, I pointed to a thoroughly unhinged appearance on Hardball by Dick Armey to argue that the American Right is (and has long been) so extreme, radical, and reliant on divisive cultural tribalism that "all of this chatter about post-partisan transcendence and trans-partisan harmony and the like is so inane," and that "Republicans have made about as clear as possible that even though they'll pay lip service to 'bipartisanship,' they don't actually want that." In December, 2008, I argued that Obama's supposedly "new politics" was little more than a rehash of Bill Clinton's DLC "centrism" and triangulation, and was every bit as unlikely to succeed in disarming and co-opting the Right and ushering in an era of bipartisan harmony as the impeached Bill Clinton's tactics were. I've long thought that the events of the Obama presidency have vindicated that skepticism.

But perhaps, at least in the realm of Terrorism and foreign policy, I was wrong about this. In addition to Christine O'Donnell's effusive praise for Obama's Terrorism and war actions in Afghanistan, Pakistan and Yemen, Bush CIA and NSA Director Michael Hayden has repeatedly praised Obama's "powerful continuity" with Bush/Cheney in these areas; torture choreographer Condoleezza Rice came out of a meeting with the President on Friday and praised his foreign policy and hailed him as "a defender of America's interests"; and one of the most ardent defenders of Obama's assassination program is the incomparably unhinged anti-Muslim fanatic Andrew McCarthy of National Review.

So here we find at least a glimpse of the post-partisan harmony which Obama and so many of his supporters insisted would be the result of an Obama presidency. Of course, that's not all that difficult to engender if the tactic is simply to embrace their worldview (and Obama is making clear that he intends even more of this "accommodation" after November). As I wrote in the post about Dick Armey:

Beltway "bipartisanship" means that Democrats adopt as many GOP beliefs as possible so what ultimately is done resembles Republican policies as much as possible (anyone doubting that should simply review these "bipartisan" votes of the last eight years). . . . Republicans aren't interested in 'bipartisanship' except to the extent that they can force Democrats to enact their policies even though they have only a small minority thanks to being so forcefully rejected by the citizenry.

Many of the attempts to demonize tea party candidates are overblown and clearly designed to distract from the Democrats' intense unpopularity and failures (see, for instance, the attacks from Jack Conway on Rand Paul for not being a True Christian), but one genuinely creepy and disturbing incident took place in Alaska last night, when private security guards working for GOP Senate nominee (and Palin-endorsed tea party favorite) Joe Miller handcuffed a reporter who was asking Miller questions he did not want to answer. See this photograph for a taste of how thuggish this behavior was. The next time Miller goes to lecture everyone on how urgent it is that we return to our Constitutional roots, perhaps he can stand next to this photograph of his private goons "arresting" an adversarial reporter. This ought to provoke serious objections from any actual journalists, and these private "guards" (and Miller himself) ought to be investigated and, if warranted, arrested for false imprisonment. This behavior is so clearly intolerable that it's difficult to put into words.