Paladino debates Cuomo -- and a madam

"Crazy Carl" got what may have been his only clear shot at Andrew Cuomo on Monday, but he had to share the stage 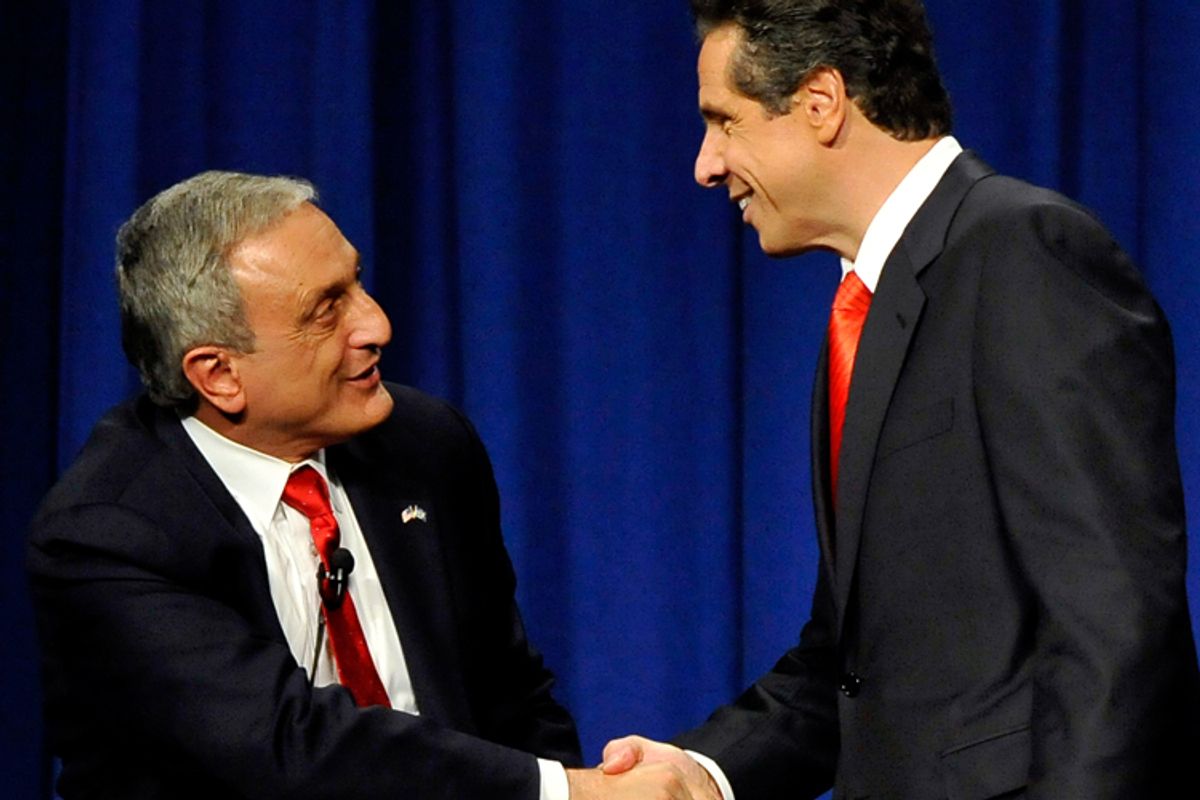 The stage was awfully crowded on Monday night for what might have been the only debate of New York's gubernatorial campaign, with five niche party candidates joining the two big boys. So before we dissect the proceedings, let's be clear on who's who:

Howie Hawkins: Green Party; unclear where he stands on most issues, except against hydraulic fracturing for oil and for continued vilification of Wall Street

Kristin Davis: Anti-Prohibition Party; former madam; wants to legalize pot and casino gambling. Credit for the most blue eye shadow and pink lipstick ever worn at a gubernatorial debate

This wasn't the Paladino-Cuomo grudge match that people expected. If anything, it proved a boring event, without sufficient humor or fireworks to distract from how entirely dispiriting the evening’s discourse was. New York's manifold economic woes loomed larger, and more majestic, than any of the candidates.

Let me get the two best lines out the way, first. And yes, they were all rehearsed:

From Norman Redlich: "I’ve never been caught with a prostitute and my dad wasn’t Governor."

From Kristin Davis: "The difference between the MTA and my escort service is I had one set of books and delivered on-time and efficient service."

Dividing the available time among seven candidates rendered them all curiously equal and dwarfish. In a normal race, this would have minimized Andrew Cuomo, who’s leading in the polls. But the stature gap – with the possible exception of the nerdy but contrastively impressive Redlich -- clearly redounded to Cuomo’s benefit. You could actually imagine him as governor; the others you could only imagine making guest appearances on "Parks and Recreation."

All eyes were on Paladino. His stunning primary victory gave him a jolt of momentum, which he promptly squandered with a series of intemperate remarks about gays and others that raised issues about his fundamental stability.

Paladino was on his best behavior tonight, but his best fell far short. He seemed nervous and twitchy. He kept looking at his notes, and, as my grandmother would have said, engaged in a lot of fumfering.  He said nothing new, which is fine, except he said it without much coherence or persuasiveness. His best moment was in his concluding remarks, when he framed his much-discussed anger as a passion for saving New York. "That’s why they call me crazy," Paladino said. "I’m going to tell you my plan, and you tell me if I’m crazy.”

Neither Paladino nor Cuomo mentioned the other; it felt like an ex-husband and a current husband showed up at the same party, and neither wanted to get things going. Cuomo, for his part, spent most of his time beating up New York's government and its manifold failures. He reeled off an artillery attack on Albany's fraud and inefficiency. "Government doesn’t get it," he declared.

In this, Cuomo wasn't alone; all seven candidates agreed that New York is a failed mess -- with toxic taxes, fatted with too many layers of government, larded with massive corruption and bureaucratic pigs at the public trough.

But when it came to how to address the bloat, they all sounded suspiciously the same (probably because they all read the same polls): We need more jobs, we need to cut spending, to demand greater accountability from the MTA, to make government work more efficiently, and so on.

The five candidate from the niche parties -- I find that locution preferable to "minor parties" -- added sideshow value, particularly Jimmy McMillan whose accelerated patter resolved every statement with a ringing "The rent is too damn high" that got chuckles from the other candidates and the otherwise impassive moderator.

Yes, Charles Barron brought up some legitimate issues about Cuomo’s "selectivity" in going after corruption. And it was fun to watch Kristin Davis find every opportunity bring up her entrepreneurial work as a madam. The one credible voice in the niche mix was Redlich, who cogently articulated the Libertarian Party line. His comment that Cuomo is has a "No administrator left behind policy" on education spending was the wittiest crack of the evening.

But given New York's problems -- and given that Jimmy McMillan received less than 4,000 total votes the two times he ran for mayor -- it’s clear that a two-man debate would have been more valuable, and would have forced Cuomo and Paladino to confront each other more directly.

Missing from everyone’s lips is that sacrifice is required. New York has an $8.2 billion budget deficit, and massive unpaid pension liabilities. There will be blood, but none of the shrinking seven seemed willing or able to summon us to the moment.