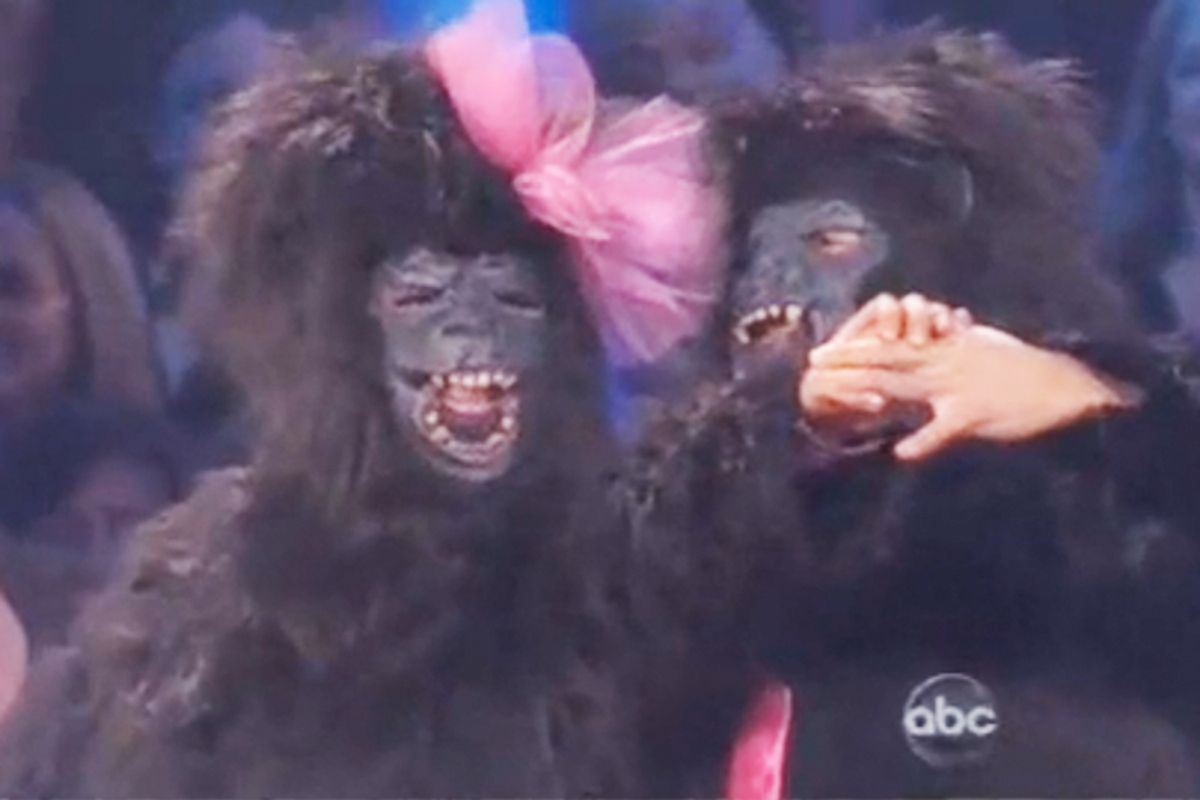 Bristol Palin performs on "Dancing With the Stars."
--

So, Situation, are you surprised that you got eliminated from the competition last week?

"Some people may call it 'an elimination'-- but that's just a fallacy that goes back to prehistoric kindergarten."

"…I'm the freakin' grandpappy pimp in the MIA, yo…"

"The Situation moves ON. Finds a chick who's DTF –- no grenades or landmines…

"Grenades or landmines. Grenade's a big ugly chick and a landmine's a thinner ugly chick…"

"And not with that broad Angelina. She's like the Staten Island ferry -- it's free, and everyone gets a ride."

"'Dancing with the Stars' has been ah-ight, but there's no dancing on that show – not really"

You don't think so?

"They should call it 'hopping to trumpety crap while they talk smack about your feet.'  That's not dancing."

"Does this look infected to you?"

It's TV theme week, so Brandy and Maks danced a quickstep to the "Friends" song "I'll Be There For You."  As usual, Brandy was SO excited about their upcoming routine. "I LOVE that song," she says to Maks, "it's like the perfect song that, like, talks about friendship, and what you want in a friend and how you want them to be there for you, you know? Aren't YOU excited Maks? Maks, aren't you SO excited? Maks?"

The quickstep is always a tricky dance for viewers to appreciate because it looks like two unhappily married people are skipping across a playground in close hold, plastic smiles on their faces, doing their best not to make eye contact. And there are no lifts or dips or time machines -– just persnickety judges looking for any flaw in timing or footwork. This week Maks and Brandy kept it simple, which pleased the judges and led to their best scores yet.

I told you it was TV theme week, right? And since DWTS can't seem to stop itself from diving headfirst into every overplayed pop culture cliché, Corky and Florence danced to "The Brady Bunch" theme! And since Florence has become an evil genius at manipulating her audience over the years, she decided to stoke our sentiments by bringing Barry Williams (aka Greg Brady) back to help "critique" her dance while not so subtly reminding us of the shocking revelation that they engaged in a relationship while filming the show. Juicy! And once again, kind of gross. Florence seems to revel in this dichotomy, making her either the most calculating vixen on the show or oddly detached from reality. Either way, it seems to be working for her.

The dance started out somewhat elegantly but went off the rails about halfway through when Florence's head became unhinged from her shoulders and started spasming wildly and about half a beat behind Corky's. I have to give her credit for trying to capture the youthful melodrama of the tango, but she ended up looking like a muppet who had popped a cable. Judges were once again flummoxed by their choices, but she has survived longer than most of the contestants her age from previous seasons, so perhaps there's a method to her madness.

In a seemingly contrived non-sequitur, she ended up dedicating the performance to her late "Brady Bunch" cast member. "I hope that Robert Reed, who died of AIDS, was watching tonight. I did it for him."

Kurt and Anna danced a quickstep to the "Bewitched" theme. Anna had not heard anything about any of these "American shows," so Kurt filled her in about how a devil-worshipping she-cult took an innocent family man hostage -- and how she wiggled her nose like a whore of Babylon to satisfy every craven need. And how the family man ultimately submitted to her dark charms and was struck down by a vengeful God and replaced by that hippie Dick Sargent in 1969. Then Anna said something about two Russian dogs named Blinkstrova and Schmegminskie who went to space and became huge celebrities.

That's kind of what happened anyway.

Kurt also didn't miss an opportunity to educate us about how he was behind last week, but that he had learned after being down and out in his life over and over again that he was all "The Blind Side" when it came to persevering and that he would end up on top. Subtext: Praise God or fail.

This week his dance was much tighter and more polished, except for his posture which continued to look like he was leaning over to peek through a changing room glory hole. Overall, judges were impressed and he should sail through next week.

Audrina and Tony danced a rumba to "The Hills" theme. Audrina was uncomfortable dancing so intimately with somebody who was not on the MTV payroll, so she took a bite out of a raw onion to make her less attractive to her dance partner and therefore distract her from the sexiness of the experience. "It's a trick Richard Gere taught me," Tony explains to us. Honestly, I'm not sure how Audrina having nasty breath will make her any less attracted to the person WITHOUT nasty breath, but who am I to question Buddhist teaching?

Audrina apparently did well on her footwork this week, but for the fourth week in a row I couldn't distinguish one dance of hers from any of the others. So, the judges once again talked about how she needed to work on performance. I suppose the judges have to talk about how it's important for contestants to find their inner passion when they dance, but what do they say when they're fairly convinced there is no passion to find? Well, they say things like "your footwork is great and you are gorgeous, but above your waist you look still and dead…"

Kyle and Lacey danced a foxtrot to the "Charlie's Angels" theme. The poor kid can't catch a break. I'm not sure what's changed between the time that he was the much beloved favorite of judges and audience alike, and tonight when he was eviscerated by Len for being "bloody awful" and given the lowest score of the night (a five) by the increasingly cranky Brit. But something is amiss.

I don't know anything about what a foxtrot is supposed to look like but according to Len and Bruno it's not supposed to resemble anything that's much fun to look at. They pulled out all of the "Saturday Night Fever" cliché moves, and seemed to keep in step and entertain the audience. Perhaps there was something about Lacey's Farrah Fawcett get up that was tweaking an unpleasant nun memory from Len's strict English boarding school, but whatever it is that's upsetting him, they better get a handle on it and fast. Their star has been falling for the past two weeks and it plummeted again tonight.

Rick was being overwhelmed by Cheryl in rehearsal, cueing the all-important "off-site" visit meant to expose them to bigger celebrities who will attract viewer votes. I mean, to help clear their heads. Naturally the only people who could do this for Rick were 11-time NBA Championship coach Phil Jackson and NBA Finals MVP for 2009 and 2010 Kobe Bryant.  I always wonder how people like Kobe Bryant feel when they realize that they've become commodities that people use to accentuate their own celebrity status. Annoyed or flattered? Trapped or powerful? All of the above?

They danced a rumba to the "Hill Street Blues" theme. I don't know if it was the quality of the music, or the skill of the dance but it was hard for me to take my eyes off of them. It was captivating, sultry and magnetic. Bruno and Carrie Ann were both blown away, while Len continued to manifest the effects of the painful flashbacks of a nun's ruler wrapping against his raw knuckles and her cold voice saying "filthy boys who defile their bodies in the pursuit of pleasure make the holy mother weep blood, Mr. Goodman, and burn in Satan's fire. For eternity."

Bristol and Mark danced a jive to the theme from the Monkees. To get into character, Mark took Bristol to a clown school where she was taught to express basic human feelings through facial expressions -– which apparently for Bristol meant laughing with her hand over her mouth when someone said "show me sad" or "now you're angry." Since that didn't go as planned, Mark decided to take a huge risk by choreographing a slapstick routine that started out with both of them in full monkey suits -– masks included.

From the very beginning of the dance Bristol seemed disoriented, probably because she couldn't see where she was going through the monkey mask (I'm also not sure I get the wisdom of dressing your lackluster contestant in a ridiculous costume to dispel the worry that they don't have a personality to share. Doesn't that just confirm it?) Once the costume came off, Bristol spent the first few seconds trying to detangle herself from the hairy beast and then spent the rest of her time seemingly wondering how she was going to overcome the humiliation of the performance. She would have been better served if she had been harpooned by a large animal tranquilizer before finishing.

In a blatantly biased critique, the judges were much more forgiving of her routine –- apparently having decided that she was more deserving of tact than the younger Kyle. Len enjoyed the monkey suit and would have preferred she kept it on longer –- I can only assume because it provided a respite from the temptation of the flesh for few soul-cleansing minutes.

The front-runner pressure is getting to Jennifer and Derek. "What if this is the one dance I don't know how to do?" she asks, stumbling over her feet during the first few minutes of practice – clearly more frustrated than she has been all season. It was a little eerie to see the friction between Derek and Jennifer during rehearsal mirroring similar scenes with Patrick Swayze in "Dirty Dancing."

They danced a '50s-themed foxtrot to "Love and Marriage." Jennifer was clearly off, and seemed more disconnected from Derek than she has been before. But it was still one of the best of the night, and they have no clear competition in sight.