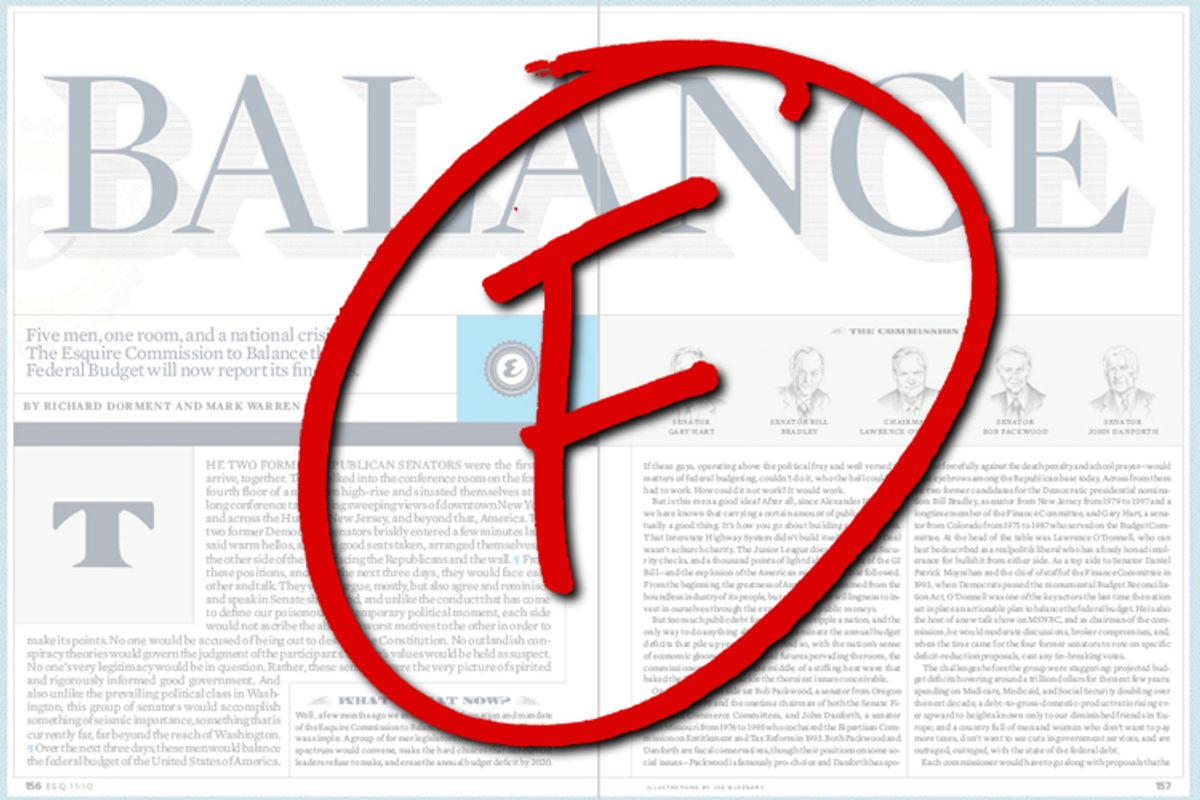 President Obama’s bipartisan deficit commission, which is scheduled to issue its report on the budget in December, has been criticized for being stacked with conservative deficit hawks, including its co-chairs Alan Simpson and Erskine Bowles. In order to present an alternate view, Esquire magazine created its own "Commission to Balance the Federal Budget" made up of two retired Democratic senators, Bill Bradley and Gary Hart, and two retired Republican senators, John Danforth and Bob Packwood. Unfortunately, the Esquire plan fails to address the real problems facing the economy and the federal budget. Its irrational premises, omissions and biases may foreshadow those of the presidential commission’s report.

Esquire tells us: "For three days, the commissioners debated, deliberated and compromised their way to the following set of proposals, and they not only balanced the budget in 2020 -- they achieved a $20 billion surplus." This in itself tells us that the former senators have a shaky grasp of macroeconomics. If the experience of other countries like Japan that have endured asset bubble collapses is a guide, it could take until 2018 or beyond for American households to "deleverage" or pay down debt to healthy levels once again. It might take even longer, in the absence of further government stimulus or a surge in American exports, neither of which seems likely at present.

To withdraw money from the economy by raising taxes and cutting spending, while consumers are still saving rather than spending, is to risk renewed economic collapse. This was the mistake made by the U.S. government in 1937, when premature budget balancing plunged the economy back into depression. If “The Backstory” account of the Esquire panel’s deliberations is to be believed, this ominous possibility received only the briefest of discussions: “The economy is still shaky, and making any major adjustments to federal spending or revenue might only make current matters worse … As a concession to the potential destabilizing effect of budget cuts while the American economy is less than vital, the commissioners agree that any ideas on the table won’t kick in until 2013, the better to let the economy recover.” 2013? How about 2018, if not 2023?

The project loses all credibility at the beginning of the deliberations, when former Republican Senator John Danforth insists that the federal government share of GDP can never be more than 20 percent. According to Danforth, I pick 20 because since World War II, spending has averaged 20 percent of GDP and because revenues have never averaged more than 20.9 percent of GDP." This is a completely arbitrary number, and one that is too small, given the aging of the population.

So with the terms set -- a zero-dollar deficit with both spending and revenue pegged to 20 percent of GDP -- [former Republican Senator Bob] Packwood zeroes in on the big four entitlements. "Medicare, Medicaid, Social Security and other government retirement programs are killing us," he says.

This makes no sense -- the current federal budget deficit is a result of recession-caused revenue collapses and bailouts, two ongoing wars and the Bush tax cuts -- and Social Security has its own revenue stream making it solvent until the 2030s. But never mind. Danforth then issues another ultimatum -- the government must “raise additional revenue without driving up individual tax rates." In other words, the four senators oppose letting the Bush administration’s tax cuts for the rich expire.

And how do the two retired Democratic senators on the panel, Hart and Bradley, respond? They capitulate to the ultimatums issued by the two conservative Republicans.

Given the arbitrary constraints on the discussion -- the federal share of GDP must be limited for no good reason to 20 percent forever and income taxes on the rich must not go up -- it then becomes inevitable that middle class and working class Americans must suffer to achieve the misguided goal of balancing the budget prematurely while sparing the rich.

The panel’s decision to keep taxes at their present levels produces a $273 billion hole in the budget in 2020. The panel plugs that hole, with $26 billion in tax revenue to spare, with the help of three big tax reforms. Limiting itemized deductions for higher earners is a sound idea, but it frees up only $57 billion in 2020. The big money -- $130 billion -- comes from increasing the gas tax by $1 a gallon, a regressive tax increase which if done quickly would have disastrous effects on working American families while crippling many businesses in the U.S. The four senators would also repeal the employer healthcare exclusion and replace it with a much less expensive tax credit, freeing up $63 billion.

Massive cuts in healthcare subsidies and massive increases in gas taxes -- but no higher income or capital gains taxes on the rich. If that is not "bipartisan" enough, the panel goes after Social Security, cutting it by $86 billion a year by 2020. The four retired senators achieve these Social Security savings by penalizing less affluent retirees. They raise the retirement age to 70; they change the formula used to calculate Social Security cost-of-living adjustments in order to stealthily lower Social Security payments over time, in the hope no doubt that the seniors won’t notice they’re getting less and less for their payroll taxes; and they increase the years used to calculate benefits.

Most experts agree that Medicare, not Social Security, is the real long-term threat to the federal budget -- and that the source of the problem is cost inflation in the medical sector, not excessive demand. The four senators, however, get only $10 billion in health savings from the out-of-control healthcare sector, while gouging nearly nine times as much out of the far more solvent Social Security program.

It gets worse. Uwe Reinhardt and other experts on medical costs have argued that the solution to health cost inflation is to adopt the fee schedules or price controls for medical goods and services that keep costs contained in other countries. The four senators, however, propose only a single healthcare reform, one favored by Democrat Bill Bradley: medical malpractice reform by creating “medical courts.” The claim that malpractice suits against doctors, hospitals and insurance companies accounts for more than a fraction of healthcare cost inflation is a favorite conservative talking point, but it is a myth nonetheless.

To their credit, the four senators seek to get roughly half of their savings by cutting $309 billion from today’s defense budget of $700 billion, as the Iraq and Afghanistan wars are wound down by 2020. But this sensible suggestion should not divert our attention from the fact that the Esquire exercise was rigged from the beginning. Having decided to continue the Bush tax cuts indefinitely, and not to add new federal revenue sources like a federal value-added tax (VAT) other than a regressive gas tax, the four senators really have no choice except to go after defense and Social Security and healthcare if they are to reach their absurd goal of a budget surplus in 2020 and their equally misguided goal of capping federal spending at no more than 20 percent of U.S. GDP.

It is unlikely that the Esquire commission’s budget plan will get much attention, compared to that of the presidential commission. But it is nonetheless significant, because it is warped by the same biases reflected in the presidential commission and the debate about federal spending as a whole. Like the president’s commission, the Esquire commission was skewed politically. Both Bradley and Hart come from the neoliberal, deficit hawk wing of the Democratic Party. It is doubtful that progressive Democrats on the panel would have given in so easily to the extreme and arbitrary conditions imposed on the discussion by the Republicans, Danforth and Packwood. Indeed, the Esquire panel recapitulated, in miniature, the pattern in public debate -- the small-government Right sets the terms of the debate about the budget, and centrist Democrats cave in.

The most irrational aspect of this failed exercise is the idea that a particular government share of GDP must be frozen forever at some arbitrary level, no matter how much society or the economy changes. This notion has long been a hobby-horse of Republican panel member Packwood. In a May 11, 2009 op-ed in the New York Times, "The G.D.P. Question," Packwood rejected the option of a national VAT because “this would ultimately take its hardest toll on lower-and middle-income consumers.” So would the massive gas tax increase advocated by Packwood and his fellow commissioners, which as a tax on a single product would distort the economy far more than a broadly-based VAT, whose regressive effects could be countered by other tax cuts for working Americans.

There is a global trend in government spending as a percentage of gross domestic product, and that is up, up, up. Fifty years ago all governments in the United States -- federal, state and local -- together spent about 20 percent of the G.D.P. In 2010 that figure could approach 35 percent is generally true of Western democracies. Thirty years ago, they typically spent less of their G.D.P. than they spend now. Today Britain exceeds 40 percent. France and Italy border on 50 percent and the Nordic countries spend even more.

This raises the question: so what? What was so magic about the government share of GDP in Europe in 1960 as opposed to today’s? Today’s Europeans are better off than Europeans in 1960, and European per-hour productivity growth is comparable to that of the U.S. (Europe’s overall GDP is lower because European workers have more retirement and longer vacations than overworked, underpaid Americans).

So Americans have a choice. We can spend 40 percent of our G.D.P., and provide services like Britain’s national healthcare. If we spent like the Nordic countries, we could provide government-paid maternity leave, subsidize college tuition and offer a health plan that was close to free for all Americans. But this would leave significantly less money for taxpayers to spend as they want.

Sounds like a plan to me. It’s a pity the Esquire commission didn't see fit to pursue these promising ideas.