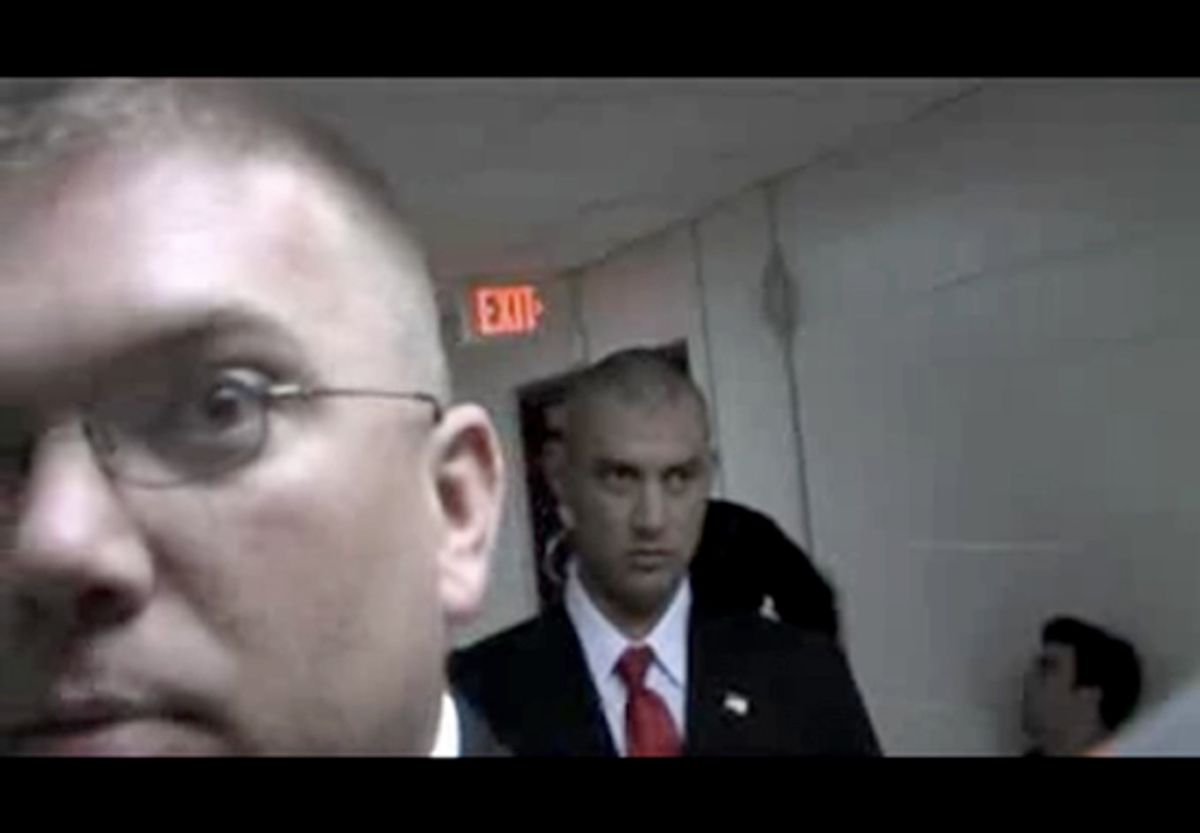 One of the more disturbing election incidents took place in Alaska on Sunday night, when private "guards" working for GOP Senate nominee Joe Miller forcibly detained and handcuffed a journalist as he tried to ask the candidate questions which he did not want to answer.  This photograph shows the journalist, Alaska Dispatch's Tony Hopfinger, handcuffed in a chair, surrounded by Miller's guards.  This story became much worse yesterday when video was released that was taken by a reporter from the Anchorage Daily News showing that these guards thuggishly threatened at least two other reporters, from ADN, with physical detention as they tried to find out what happened, demanded that they leave or else "be handcuffed," and physically blocked them from filming the incident all while threatening to physically remove them from the event, which was advertised to the public (see video below).

But revelations today have made the story much, much worse still.  ADN now reports that not only was Joe Miller's excuse for why he had hired private guards a lie, but two of the guards who handcuffed the journalist and threatened others are active-duty soldiers in the U.S. military:

Was Joe Miller required to bring a security detail to his town hall meeting Sunday at Central Middle School?

That's what Miller, the Republican Senate candidate, told two national cable news networks Monday in the wake of the arrest by his security squad of an online journalist at his public event.

But the school district said there was no such requirement made of Miller . . . "We do not require users to hire security," she said. . . .

Meanwhile, the Army says that two of the guards who assisted in the arrest of the journalist and who tried to prevent two other reporters from filming the detention were active-duty soldiers moonlighting for Miller's security contractor, the Drop Zone, a Spenard surplus store and protection service.

The soldiers, Spc. Tyler Ellingboe, 22, and Sgt. Alexander Valdez, 31, are assigned to the 3rd Maneuver Enhancement Brigade at Fort Richardson. Maj. Bill Coppernoll, the public affairs officer for the Army in Alaska, said the two soldiers did not have permission from their current chain of command to work for the Drop Zone, but the Army was still researching whether previous company or brigade commanders authorized their employment.

If it's not completely intolerable to have active-duty soldiers handcuffing American journalists on U.S. soil while acting as private "guards" for Senate candidates, what would be?  This is the sort of thing that the U.S. State Department would readily condemn if it happened in Egypt or Iran or Venezuela or Cuba:  active-duty soldiers detaining journalists while they're paid by politician candidates?  The fact that Joe Miller has been defending the conduct of his private guards in handcuffing a journalist and threatening others with handcuffs should be disqualifying by itself.  That reveals a deeply disturbed authoritarian mind.  But the fact that these guards are active-duty U.S. soldiers makes this entire incident far more disturbing.  Shouldn't American journalists of every stripe be vehemently protesting this incident?

UPDATE:  DoD Directive 1344.10 -- governing "Political Activities by Members of the Armed Forces on Active Duty" -- provides: "A member on AD [active duty] shall not: ... [p]articipate in partisan political management, campaigns, or conventions."  The legality is the least of the concerns here.  That directive exists because it's dangerous and undemocratic to have active-duty soldiers taking an active role in partisan campaigns; having them handcuff journalists on behalf of candidates is so far over that line that it's hard to believe it happened.  The real issue, though, is Joe Miller: the fact that he did this and then emphatically defended it reveals the deep authoritarianism of many of these "small-government, pro-Constitution" right-wing candidates.  Any American of minimal decency should be repelled by this incident.

UPDATE II:  The more recent version of the relevant DoD Directive is here.  It is essentially the same as the one quoted in the prior update, with slight differences, and provides, among other things:  "A member of the Armed Forces on active duty shall not: . . . [p]erform clerical or other duties for a partisan political committee or candidate during a campaign."

Speaking of the deep authoritarianism of many of these "small-government, pro-Constitution" right-wing candidates, Digby notes this video of what took place at a rally in a public park for GOP tea party Congressional nominee Allen West in South Florida, when a 23-year-old worker for West's opponent -- Democratic Rep. Ron Klein -- showed up with a video camera:

It's not nearly as bad as the Miller incident in Alaska, but it's the same anti-democratic mindset driving it.