The most depressing debate ever 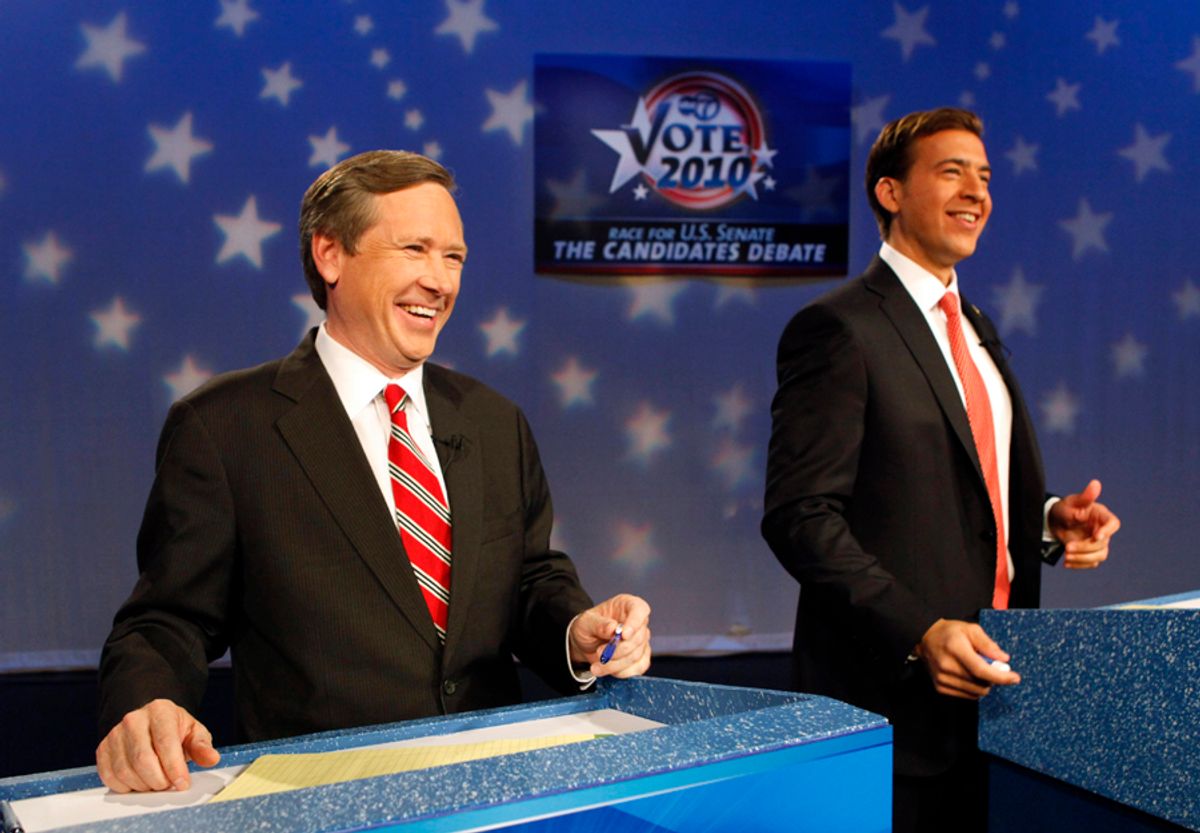 Dirty campaigns and nasty debates can be a guilty pleasure, as anyone who remembers Charles Robb's famous closing argument against Oliver North can attest. But sometimes they're just a drag. Case in point: The race for Barack Obama's old Senate seat.

The two candidates, Alexi Giannoulias and Mark Kirk, faced off on Tuesday night, each trying mightily to land a knockout punch. The race has been even for months and the outcome -- like that of every close contest this year -- could determine which party controls the Senate. But all they really did was demonstrate why polls consistently show that voters don't want to vote for either of them.

The problem is easy to identify. Neither candidate has the sort of charm, charisma, personality or life story that stirs the electorate's passions, nor is either associated with any great philosophical or ideological movement. Giannoulias, the 34-year-old state treasurer, and Kirk, a fifth-term congressman, are both thoroughly average politicians, the kind who succeed by not rocking the boat and by being in the right place at the right time. There's just nothing about either of them that should excite the casual viewer.

At the same time, they both have some baggage. Kirk has a nasty tendency to embellish his military exploits -- he's a 20-year Naval reservist -- while Giannoulias' family bank -- in which he served as a senior loan officer -- has loaned money to some shady characters and was seized by federal regulators earlier this year.

Not surprisingly, both campaigns concluded long ago that the best -- and probably only -- way to win would involve making the other guy's baggage seem worse. Which made for an utterly depressing spectacle on Tuesday night: two dreary communicators alternately struggling to pin dirt on each and mouthing generic, predictable rhetoric about healthcare, taxes, government spending and immigration.

The takeaway sound bites mostly came in the first 15 minutes, when one of the moderators, after lamenting the "notable lack of high-level discourse" in the campaign, asked each candidate to defend his honor -- and essentially gave them each a chance to slime the other.

Kirk, whose embellishments include false claims that he came under enemy fire while flying a mission over Iraq in 2000 and that he was named "Navy Intelligence Officer of the Year" in 1999, admitted that "I misstated part of my record. It's a painful process. I learned from that." Giannoulias, who in addition to his family bank woes also oversaw the collapse of a state-run student loan program as treasurer, insisted that "no one has ever suggested that our bank has ever done anything illegal, illicit, or improper -- ever."

Then they let loose on each other. "The difference between me and Congressman Kirk," Giannoulias announced, "is that I've always told the truth."

Kirk framed things differently. "I'm not perfect," he said. "I made mistakes, but I owned them and I corrected them. Meanwhile, my opponent: Nothing is his fault." He then sought to connect Giannoulias to a convicted bookie named Michael "Jaws" Giorango, whose Miami hotels -- once linked to a prostitution ring -- Giannoulias visited back in 2006, when Giorango was arranging a loan from his family bank.

Giannoulias shrugged off the charge, then demanded -- over and over -- that Kirk clarify whether he was shot at while in Kandahar in 2009, a claim he seemed to make earlier this year. "The question, congressman, is, 'Why with this record would you not tell the truth -- why would you make all this stuff up?' It's a simple question. Were you shot at or not?"

That prompted Kirk to paint Giannoulias as coward. "The ultimate irony is that a man who spends most of his campaign for the Senate criticizing my military record -- and yet he never served a day in uniform himself." Seconds later, he added: "You were back in the rear with the gear, and I understand you made that decision."

They also talked about issues, but let's not pretend their 18-point plans will decide this race. To the extent Giannoulias and Kirk matter to the outcome (as opposed to the national political climate and voters' built-in party loyalties), it's a question of which one is least personally offensive to the electorate. On that score, there was no clear winner on Tuesday. This one is going down to the wire. Try to contain your excitement.