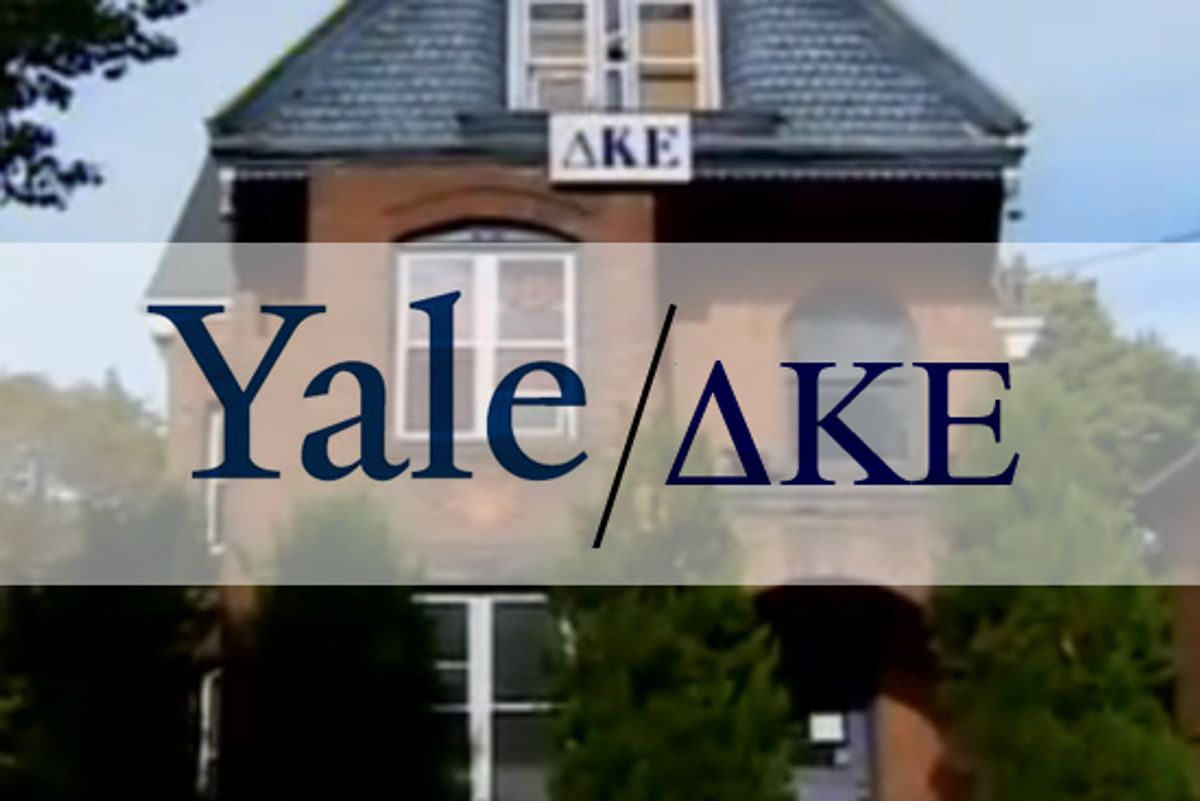 You all have had plenty to say in response to my interview with a member of Yale's Delta Kappa Epsilon, the fraternity mired in scandal following a pledge event involving chants about rape and necrophilia. Now my anonymous interviewee has waded into the letters thread to respond to reader criticism. You'll find his response below (with links added to relevant comments). I wanted to start a real conversation -- well, here we have it.

From the "frat boy"

I've been following these comments, and in an attempt to further this discussion, I thought I'd create an account to discuss a few of the issues brought up.

Firstly I'd like to thank Tracy again for actively seeking another viewpoint. The more information we have, the better the content of discussion.

1) Why I would insist on anonymity?

I think this one is fairly self-explanatory. I have no interest in having this story follow me around for the rest of my life, when I neither participated nor am responsible for this event. Unfortunately, as evidenced by some of these comments, I cannot trust others to always view this event in a level-headed way, and therefore would like to wrongly avoid being made the mascot of all fraternal misogyny. I hope that you will not trivialize or dismiss my opinions simply because I hope to remain anonymous.

...Is the greatest tragedy in this event. There's no other excuse except for mob-mentality and thoughtlessness. In this case, many people made mistakes, and many people are trying to make amends.

3) The role of intent in this issue:

Despite many comments to the contrary (hontonoshijin, Knidsralright, etc.) I think intent has a significantly place in this discussion (it certainly is a factor in legal cases.) It was not the intent of the fraternity to promote or condone violence in anyway. Does that mean that what we did wasn't wrong? Of course not. But what we did, in my opinion, does not justify "tearing up the first amendment" ...

I'm sorry, but times change. I hope you are mature enough to not make generalizations about something you know little about. When you graduated, I was 5. So please don't allow your personal experience to prejudice your opinions about an entirely different group of people.

I'm not sure if you interpreted my response correctly. I meant to communicate that I feel sympathy for the men described in the powerpoint who will now have that follow them around. I don't see how that event even has any connection to this one, except for the fact that it gained rapid popularity due to modern media.

6) Professional ambition and its role in fraternities:

I don't know how to be clearer. It is not a factor in our chapter. Anyone at Yale now will tell you that DKE is a vastly different organization than the one that produced heads of state in a previous generation. Moreover, you're hardly guaranteed a lucrative job nowadays just from the people you know, at least not at the highest levels. At Yale, brothers join the fraternity for camaraderie and a socialization outlet. Again, I can't speak for other fraternities at other schools -- but I hope the institutions of favoritism and cronyisms are universally extinct. More importantly, I'm not even sure what this has to do with the debate...

I'm not sure what fraternity you were in but I feel sorry for you if you had to endure such hazing. There wouldn't be a single brother in DKE if we had to do anything so absurd. Thank you for perpetuating another unfounded stereotype based on misinformation (or likely your imagination)

8) why such things happen in the first place:

I think it's easy to overthink this debate, especially when taken out of context. Sometimes people do stupid things for humor that go too far, without any master strategy to subvert the other gender.