The movie icon continues to go to bat for her embattled friend. Maybe it's time to rethink the acclaimed actress 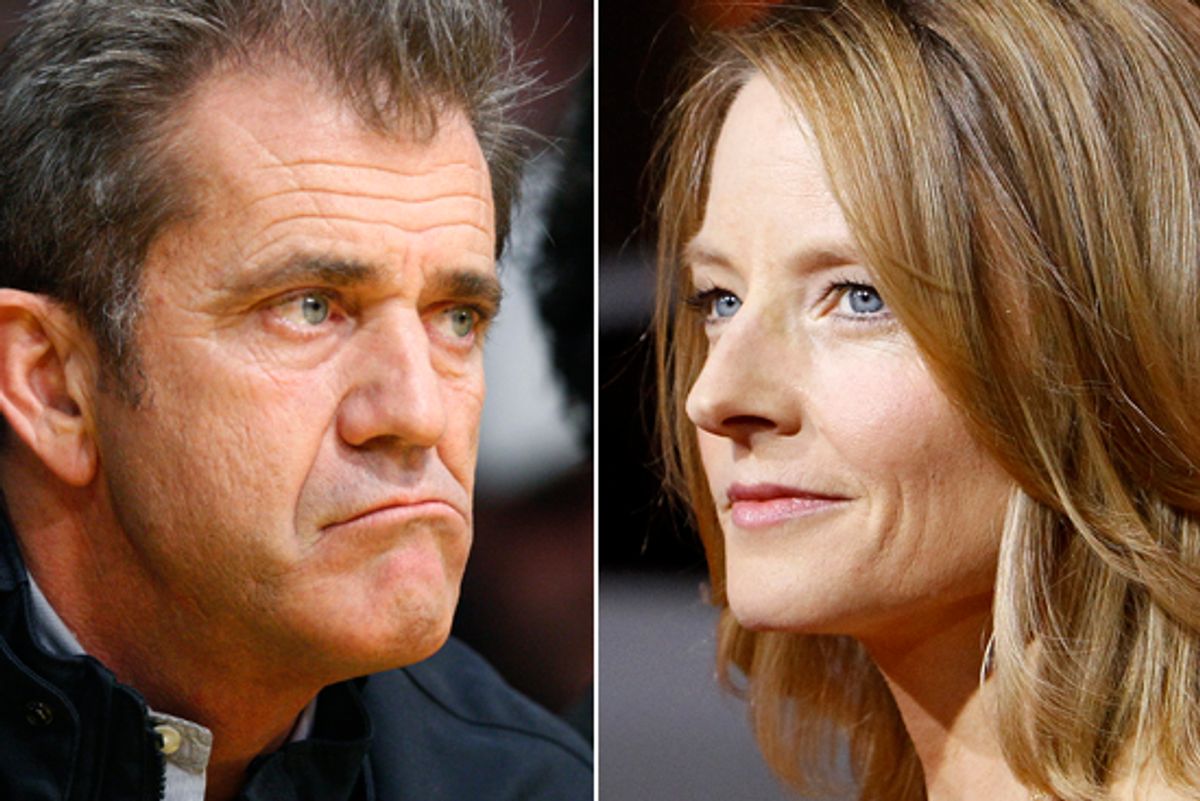 The time has come to admit it -- Jodie Foster is not all that. Foster, beloved child actress turned two-time Academy Award winner, Yale magna cum laude, respected director and person who has lived in the public eye for 40 years without a nip slip, bar brawl or nutty Twitter outburst, seems in many ways the epitome of graceful modern womanhood. She is serious about her work, she is devoted to her children and she was honored Monday as one of Elle magazine's top women in Hollywood. And it was there that she spoke of "an amazing actor, an incredible friend, a loyal friend of mine for 18 years." She described him as "incredibly loved by everyone who ever comes into contact with him or works with him ... truly the most loved man in the film business, so, hopefully that stands for something."

She was talking about Mel Gibson. Say what?

Foster and Gibson have a long history – they appeared together in 1994's "Maverick" and costar in the someday-to-be-released Foster-directed comedy "The Beaver." So it's understandable that a director and star, one with a nearly impossible-to-promote movie, would want to do as much damage control as possible for her project. It's even somewhat laudable to stand by a friend with a tarnished reputation. But when the friend in question is someone accused of spousal abuse, threats, and the most vicious, appalling of sexual and racial slurs, maybe she'd want to distance herself a little. When said friend already has a colorful history of drunk driving and accusing the Jews of being "responsible for all the wars in the world," is that really the corner she still wants to be in? She doesn't have to call for his head on a plate – a woman so famously guarded in her private life surely knows how to get off a polite "no comment" or even a shrugged "I really can't say."

Yet Foster's suspect loyalty to internationally acclaimed, unrepentant creeps doesn't end with "the most loved man in show business." She'll soon be heading to Europe to costar in "The God of Carnage," directed by Oscar-winning child rapist Roman Polanski.

When you look at their canons of work, it's understandable why anyone might leap at the opportunity to collaborate with artists like Gibson or Polanski. Polanski in particular has made some of the most haunting, powerful films of the modern era. And Foster did not, like a slew of Hollywood heavyweights, sign the widely circulated petition in support of Polanski last year. But what would it take for one of the most powerful women in the film industry, a director herself, to say no thanks, I'd rather not do business with people whose track record is littered with abusive behavior?

It's tempting to see echoes of Foster's personal history in her often puzzling career choices. The woman who famously played an exploited teen in "Taxi Driver" is working with sex offender Polanski? The woman who inspired an assassination attempt starring as a gun-toting vigilante in "The Brave One?" Must ... resist ... over analysis.

Yet even when she's not aligning herself with rageaholics and fugitives, Foster's cinematic track record is something of a head scratcher. Her powerhouse glory days of movies like "The Accused" and "Silence of the Lambs" are now two decades in the past. She did a neat turn in "Inside Man," but "Flight Plan," "Panic Room" and "Nim's Island" doesn't exactly amount to a stunning body of recent work. (And if you want to blame it on her age, note that Laura Linney, Joan Allen, Hope Davis, Patricia Clarkson, Mary Louise Parker and a slew of other actresses of Foster's generation seem able to find challenging, award baiting roles in quality films.) Foster can pick and choose. And often, she chooses dreck.

So maybe she's not the best source to be dispensing backhanded compliments to her "Panic Room" daughter, Kristen Stewart. At the Elle honors, Foster told E! reporter Marc Malkin, "She's a great person, and I'm not surprised she's gone on to do great things. But I am surprised she is an actress. I felt like, Nah, she won't because she really doesn't have the stereotypical personality. Anybody who has a brain doesn't. That tells you how smart Kristen Stewart is." And let's remember she said this, by the way, at an event honoring actresses. Well, we can't all be as smart as you, Ms. Foster.

Perhaps the oddest thing about Foster, however, is how she continues to be lauded as an icon. Aside from publicly thanking "my beautiful Cydney who sticks with me through all the rotten and the bliss" three years ago, she's steadfastly never acknowledged her personal life or relationships, which, frankly, for somebody of her power and influence, is pretty cowardly. She's made a string of forgettable to downright offensive movies. And she thinks Mel Gibson is "incredibly loved." So why are organizations like Elle handing her accolades? Why are fans, especially women, especially women who fell in love with her sometime around "Bugsy Malone" not coming out and saying, she is no longer our role model? She surely still has talent and depth, but look at what she's said and done for herself lately. And hold the applause.