Joe Miller vs. the press 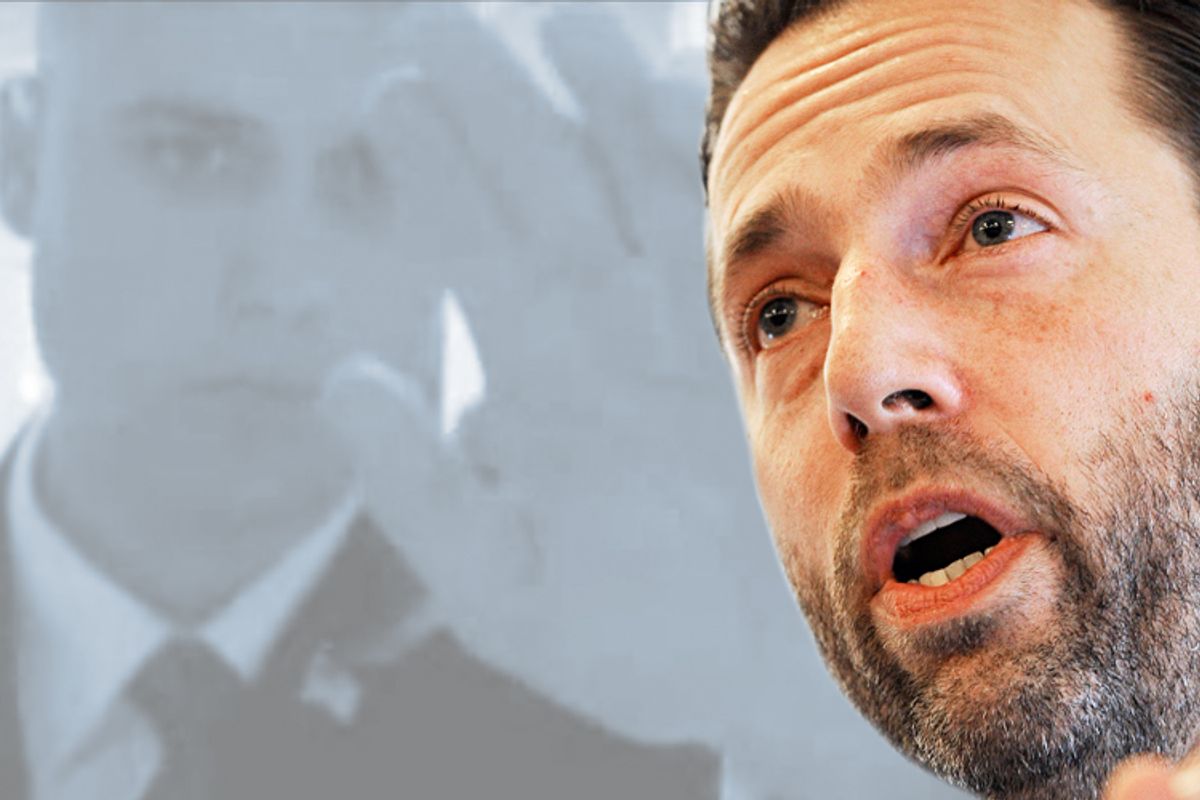 On Monday night, Alaska Senate candidates Lisa Murkowski and Scott McAdams debated before a packed house at the Snow Goose brew pub in Anchorage. They discussed resource development, affirmed their belief in evolution and said a few nice things about former Governor Sarah Palin. On the stage, in between them, was an empty chair. Alaska Dispatch, the online magazine sponsoring the event, had reserved the seat for Joe Miller, the Republican nominee, who skipped the event entirely. Had he shown up, it might have been awkward: His security detail had put one of the debate’s organizers in handcuffs just the day before.

Since the Aug. 24 primary, Alaska’s state and local media outlets have been trying to learn about Miller, a previously unknown Tea Party product who stunned Murkowski in the GOP primary. (Murkowski is now running as a write-in candidate.) It has been contentious. At times, it seems that Miller is running less against Murkowski and McAdams and more against the state media itself. The tension finally reached a flashpoint this past Sunday, when Tony Hopfinger, the founder of Alaska Dispatch and a longtime state reporter, was detained by Miller's private security team after asking the candidate about past ethics violations. Miller’s opponents have reacted with outrage and Alaska outlets are playing up the story, but conservative news sources, borrowing the Miller campaign’s language, are dismissing it as a citizen's arrest of an "irrational liberal blogger" gone violent.

The episode demonstrates how Miller has borrowed a tactic that Sharron Angle, Rand Paul and other Tea Party candidates have employed -- ducking "mainstream" media outlets and shunning some traditional aspects of campaigning -- and given it a twist, adopting a stance of naked hostility toward the Alaska media. But the blowback he's experiencing highlights another reality: You can ignore the media, but you can't make it go away. While the national press has shown more interest in Angle and O'Donnell, Alaska-based reporters have aggressively tracked Miller, producing a stream of stories that have reduced his poll standing, to the point that one survey now shows him running even with Murkowski. Fighting against the media may rally his conservative base, but it's also driving off many of the moderate Republicans and independents he needs to win this unpredictable race.

Dealing with Miller, says Anchorage Daily News reporter Sean Cockerham "reminds me a lot of dealing with Sarah Palin after she left the governor’s office." Like Palin, Miller was responsive to the newspaper's requests for comment before rising to national prominence. But after he became the front-runner and a national Tea Party darling, the calls from campaign headquarters slowed. Cockerham hasn't gotten an interview with him since September, despite daily requests. Miller seems to be taking cues from Palin, who endorsed him early this year. Reporters used to have her cell phone number, and she plucked one -- Meghan Stapleton, who had worked at Anchorage’s NBC affiliate -- to serve as her spokesperson. Now, news from Palin comes mostly from her Facebook page or Twitter feed.

"Since she resigned as governor, she has completely shut us out," Cockerham says.

Alaska Dispatch, the Anchorage Daily News and the Fairbanks Daily News-Miner aggressively reported stories about Miller’s receipt of farm subsidies, unemployment benefits and government healthcare -- entitlements that the candidate calls unconstitutional when provided by the federal government. Instead of addressing these apparent inconsistencies head-on, Miller tried to duck -- meaning that stories that could have occupied just one news cycle dragged on for weeks.

The three outlets sued for the release of his employment records as part of an investigation into whether Miller used government computers while working for Fairbanks North Star Borough in his attempt to oust the state’s Republican Party chairman. A judge agreed to expedite the legal process earlier this week, and has scheduled a special hearing for Saturday -- just over a week before Election Day.

When it comes to using the media, Miller seems content to rely on national outlets -- but, unlike Palin, O'Donnell and Angle, he doesn’t limit himself to the GOP-friendly Fox News Channel. Although state reporters had been asking about his use of borough computers for weeks, Miller, a confident communicator with an impressive academic résumé, only addressed the subject this past Monday, admitting to CNN's John King that he had been disciplined for a violation of the borough’s ethics policy.

Oct. 11, he was expected to hold a press availability before a debate. But at the last minute, he canceled. He then participated in the debate and, when it was over, sat for an interview with Fox’s Greta Van Susteren -- as Alaska reporters edged in to ask questions and record audio on their home turf. Eventually, Miller addressed them by saying he would no longer answer questions about his background. He also explicitly accused Alaska Dispatch of an illegal breach of privacy, and suggested that the magazine was a Murkowski organ, since its majority owner had once donated the maximum legal limit to her campaign.

Amanda Coyne, one of Alaska Dispatch's co-founders, says Miller's animosity toward her publication had been mounting since it featured a September story on his acceptance of farm subsidies.

"We had photoshopped a photo of him with a straw hat, and they didn’t like that," she says. "And you know, there’s some question about that, honestly. But there was nothing factual about the story that they felt that we had done wrong. It was just the general tenor of it I think -- and the fact that we actually reported on it in the first place."

Coyne and Cockerham say the state media's approach to this race has been unique because Miller is such a mysterious figure. Politics in the state are dominated by familiar names, and Alaskan outlets are accustomed to tracking the campaign activities of well-worn incumbents and their well-known challengers. But Miller's sudden emergence prompted reporters to search out every available public record that involves him. They did the same with McAdams, the one-term mayor of Sitka and another statewide newcomer. But Miller, according to Coyne, just stood out more.

Memories of 2008, when John McCain turned Palin into an overnight star, may also be a factor.

"Let me be a little blunt: The mainstream media here in Alaska got caught with their pants down with Palin," Linda Biegel, an editor of the progressive blog The Mudflats says. "When the media from the Lower 48 came up and started uncovering all kinds of things that should have been brought up previously, I think that really motivated the media to do more for this race."

If Miller's plan was to run out the clock while antagonizing state media outlets, it doesn't seem to be working. His stonewalling hasn't kept them from reporting out critical stories about him; if anything, he's only encouraged them to do so. Fairbanks Daily-News Miner reporter Jeff Richardson says that lack of access has simply necessitated a different approach, one that relies on combing through documents instead of getting answers from the candidate."There are certainly times when we’ve run stories where it would have been nice to get a quote from Miller, and we just had to go with what we had," he says. "There are instances where it would have maybe even benefited his campaign."

Since media coverage of his background has intensified, his numbers have slipped. When Murkowski announced her write-in candidacy, a Rasmussen survey gave Miller a double-digit edge. But a new CNN/Time poll released Wednesday showed him tied with Murkowski at 37 percent.

Still, in a volatile three-way race, Miller may still be able to squeak by on the strength of his support from the GOP base -- the voters who aren't offended by stories about a candidate whose staff handcuffs reporters. And Miller's anti-media posture has been good for his treasury.

It’ll be two weeks before we know if Miller supporters, who have only known him for a few months, are sufficiently attached to him. The money, though, has continued to pour in in spite of -- and conceivably because of -- the media flaying. On Monday, as the Hopfinger incident was exploding in the media, Miller's campaign sent out an e-mail with the subject line "When Liberals Attack." Political consultant Justin Hart joked on Twitter that day, "Many thanks to the crazy AK blogger at the @joemiller event. He raised $25,000 today for Joe!" Miller's campaign is now close to reaching its fundraising goal of $1 million.

Warring with the state media has clearly hurt Miller -- but the damage may not be fatal.

Alexandra Gutierrez is a reporter based in the Aleutian Islands.