Who will win this year's Academy Awards? An early look at some of the frontrunners -- and wild cards 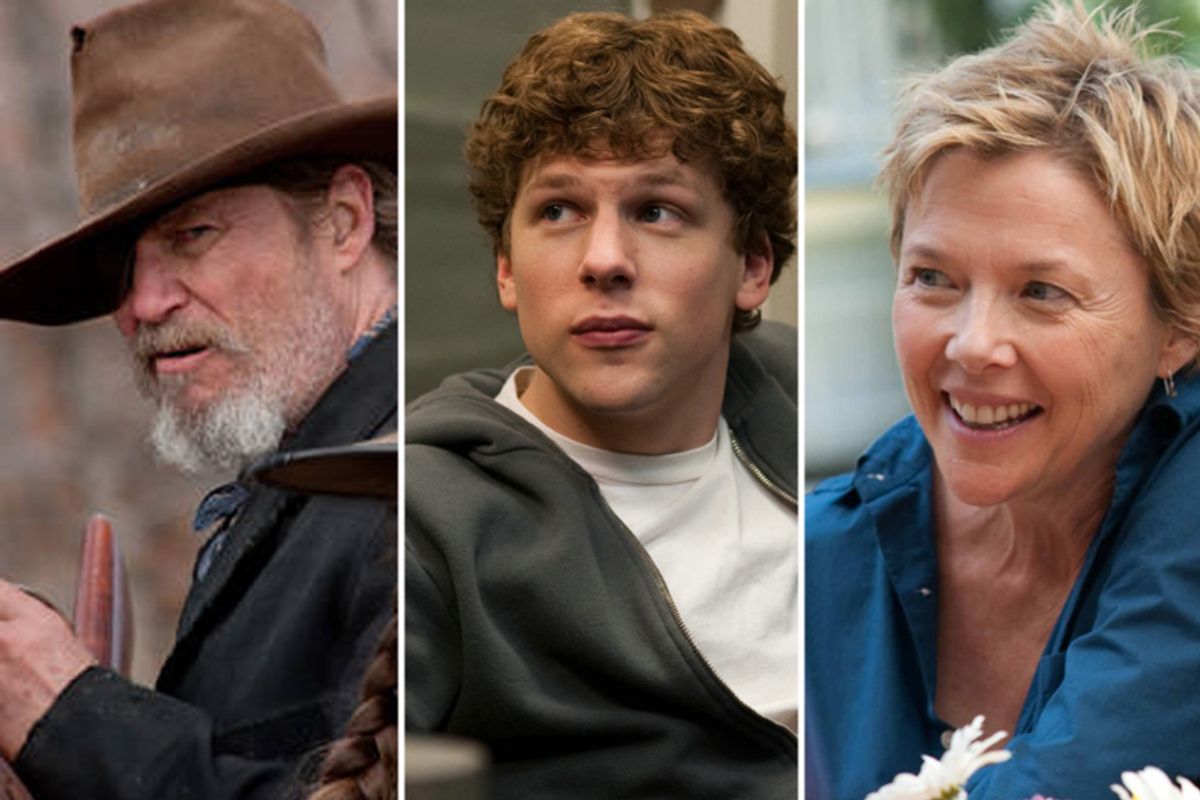 Jeff Bridges in "True Grit," Jesse Eisenberg in "The Social Network" and Annette Bening in "The Kids Are All Right"
--

Question: Is it too unbearably early to begin thinking about the annual winter circus that is Oscar season? Answer: Never! Or at least not after the Gotham Independent Film Awards nominations, the unofficial starting gun of award-mania, have gotten us started.

Let me save your comment-typin' fingers a workout and stipulate the following: No, the Oscars are no indication of quality, historically speaking; yes, the best films of the year (whether by my standards or yours) are often overlooked; and yes, covering movies by focusing overmuch on the Oscar race resembles the horse-race coverage of American politics and signifies the downfall of journalism in particular and civilization in general. But you want to know about it anyway, so let's move on. (Check out my Movie List for an utterly subjective and totally non-market-driven ranking of the year's best and worst movies.)

While the indie-centric, New York-based Gothams don't get widely noticed or discussed outside movie-biz circles, they provide a valuable early snapshot of which smaller films have been noticed by critics and industry types. Over the past few years, they've become a pretty good predictor of Oscar nominations. With the Academy sticking to 10 best-picture nominees this year, at least four of the Gothams' five best-feature nominees are solid Oscar contenders, the fifth being Matt Reeves' Euro-vampire remake "Let Me In," which might be too small, too strange and too dark for Academy voters. (Anybody who reads the Gotham press release to the end will notice that I was on the nominating committee, so you're welcome to read all this as sinister log-rolling if you like.)

In fact, this year's Oscar race looks remarkably clear-cut, considering there are still 10 weeks left in 2010 and that the huge and socially irrelevant spectacle in the Kodak Theatre is more than four months away. Those are famous last words, of course, so let me allow some wiggle room and guess that I can accurately predict at least 8 of the eventual 10 best-picture nominees. Here are the morning-line favorites, in alphabetical order, followed by an assortment of outsiders and unknowns.

127 Hours Oscar-winning director Danny Boyle ("Slumdog Millionaire") and ultra-hot hipster actor-writer-deep thinker James Franco in a stylish survival odyssey about a happy-go-lucky outdoors-type dude who has to cut his own fucking hand off! It's almost an overdose of Oscar-readiness, and how audiences will respond to this gruesome and psychedelic yarn remains to be seen. But barring a commercial disaster, multiple nominations will ensue. (Opens Nov. 5.)

Black Swan Darren Aronofsky's dazzling ballet thriller, with Natalie Portman as a young dancer haunted by the notoriously difficult starring role in "Swan Lake," was the smash hit of last month's Venice and Toronto festivals and ought to set fall audiences buzzing. Unless it crashes and burns at the box office, nominations for the film, Aronofsky and Portman are likely, with supporting nods for Vincent Cassel and Mila Kunis also possible. (Opens in early December.)

Blue Valentine The Weinstein Co. and writer-director Derek Cianfrance are currently mulling how hard to fight the MPAA's ridiculous NC-17 rating for this intense working-class marriage drama with Ryan Gosling and Michelle Williams. (The rating could affect its Oscar chances, since most mainstream theater chains won't show an NC-17 picture.) Paying viewers won't see the movie until the end of the year, but a marketing campaign that began at Sundance and continued at Cannes has positioned "Blue Valentine" as a high-integrity, high-prestige film no matter how poorly it performs financially. (Opens in late December.)

Hereafter Clint Eastwood's three-stranded, "Crash"-like exploration of mortality and the Great Beyond has gotten mixed reviews in its big-city opening, and may have trouble garnering audiences in an overcrowded season. Despite the weird subject matter, it's a handsomer, cooler, altogether more Clint-like product than "Invictus," and Eastwood movies should always be considered likely Oscar nominees until proved otherwise.

Inception Although knocked off its perch as critical fave-rave of the year (and presumptive Oscar favorite) by "The Social Network," Christopher Nolan's nested-dream thriller remains a likely best-picture nominee, if not all that likely a winner. It's a major-studio film that was exceptionally well reviewed and made a ton of money (a domestic gross approaching $300 million), and it was directed by the guy who didn't get nominated for "The Dark Knight" -- the very phenomenon that led the Academy to double the number of best-picture nominees in the first place. Me, personally? I feel like I've forgotten about "Inception" and totally don't care. But whenever you're in doubt about any Oscar-related situation or phenomenon, go with the Mafia-like conspiracy theory, and there's a debt to be paid here.

The Kids Are All Right Lisa Cholodenko's lesbian-marriage comedy got universally glowing reviews and strong indie-level box office results ($20 million-plus), and tackled a hot-button social issue in disarming fashion. I'm not sure it's going to win anything, but nominations for stars Annette Bening and Julianne Moore, co-star Mark Ruffalo (lending new weight to the comic concept of "straight man"), Cholodenko and the movie are all likely.

The King's Speech This is the only movie on this list of probables I haven't seen -- no, let's be honest. It's the one I have actively avoided, because it's a movie about King George VI and how he overcame his speech disability, and I had a hard time believing that it could possibly be anything except honorable Anglophile treacle. But at this point I've had enough trustworthy people tell me, "No, you don't understand. Just go see it." Reportedly full of Oscar-worthy performances all around, starting with Colin Firth's starring role, but also including Guy Pearce (as the abdicating Edward VIII), Michael Gambon (as the dying George V), Helena Bonham Carter (as the young Princess Elizabeth) and Timothy Spall (as Winston Churchill). (Opens in late November.)

The Social Network Perhaps you've heard of this; I believe it's about some young fellow who invents a computer, or some such thing. We've gone through a full iteration of pro-"Social Network" hype and anti-"Social Network" backlash and back again, and despite disappointing box-office returns (the film has yet to make back its reported $50 million budget, although it certainly will), the Mark Zuckerberg saga remains the leading Oscar contender, with nominations for the film, Aaron Sorkin's script, David Fincher's direction and Jesse Eisenberg's starring role a foregone conclusion. Can this film survive the inflated comparisons to "Citizen Kane" and win a bunch of statuettes? A whole bunch of highly-paid P.R. consultants are mulling that question right now, and if I were that good at reading tea leaves, I guess I'd be one of them.

Toy Story 3 Yes, I think this will be the year a Pixar movie finally makes the best-picture list, but given the Academy's particular blend of middlebrow obtuseness, there's no telling. "Toy Story 3" got wonderful reviews, made more money than any animated feature in history and entertained huge crowds all summer long. (I enjoyed it, but don't see the near-masterpiece proclaimed by its most ardent defenders.) So what's not to like? Oscar voters don't do "cartoons," it's as simple as that. Even if TS3 gets nominated, director Lee Unkrich and the Pixar crew will have to make do with the best animated feature award, and go home halfway contented.

Winter's Bone In another year, director Debra Granik's devastating female-centric Ozark crime drama would be the little indie feature that gets one semi-surprising nomination (e.g., Melissa Leo for "Frozen River"), delighting everyone involved. But here again the expanded best-picture field comes into play. While 20-year-old Jennifer Lawrence is widely seen as a best-actress contender for her starring role as Granik's teen heroine, the movie itself is a highly plausible nominee, with ultra-sinister co-star John Hawkes in the running for a supporting-actor nod.

UNKNOWNS, BOTH KNOWN AND OTHERWISE

Fair Game I don't see Doug Liman's worthy but plodding drama about the Valerie Plame affair as a strong best-picture nominee -- partly because the events in question seem to have happened a lifetime ago -- but good reviews or a surprising box-office turnout could change that. Naomi Watts (as Plame) and Sean Penn (as her husband, former diplomat Joseph Wilson) are both excellent, and surely will be considered for major acting awards. (Opens Nov. 5.)

Inside Job Charles Ferguson's blow-the-roof-off exposé of the financial criminality that led to the 2008 banking collapse is clearly the frontrunner in Oscar's documentary category. But it's an angry, elegant, well-made movie that will appeal to Hollywood's conscience, and I won't be shocked if it sneaks could into the best-picture race as well. (Documentaries are rarely nominated, but there's no rule against it.)

Made in Dagenham This red-hot British film starring Sally Hawkins and Bob Hoskins is coming up fast on the outside, with multiple nominations possible. It tackles not one but two important social issues -- labor unrest and sexual discrimination -- and does so with swingin' period costumes and a working-class Anglo accent. Director Nigel Cole and writer Billy Ivory dramatize the legendary 1968 strike at a Ford plant outside London, where female workers organized and walked off the job. I haven't seen "Made in Dagenham" yet, but it's gotten a rousing response from festival audiences, and could attract female viewers in droves. (Opens in mid-November.)

The Town I didn't much care for Ben Affleck's exercise in Bah-ston he-man self-love, and "The Town's" underwhelming results at the box office may have removed it from best-picture contention. Jeremy Renner's hothead supporting character nearly stole the movie out from under Affleck and may have earned Renner a (completely deserved) nomination.

True Grit Any Coen brothers movie carries the potential of being a serious and dark-hearted Oscar contender ("No Country for Old Men," "A Serious Man") or of being a minor, jokey-dark farce ("Burn After Reading," "The Ladykillers"). Which direction will they go with this adaptation of Charles Portis' western novel (which also produced the 1969 John Wayne hit)? A dynamite cast headed by Matt Damon, Josh Brolin and Jeff Bridges (in the Wayne role as Marshal Cogburn) suggests seriousness, while the level of secrecy surrounding the film -- which hasn't played festivals or screened for the press -- suggests nothing in particular, except that the poker-faced brothers love to keep us guessing. (Opens in late December.)

Wall Street: Money Never Sleeps In general, nah. Oliver Stone's long-awaited sequel failed to connect with either critics or audiences, and is a distant second to Ferguson's "Inside Job" when it comes to illustrating the financial collapse. But given recent news about Michael Douglas' cancer diagnosis, expect a supporting-actor Oscar nomination (at least) for his Gordon Gekko swan song.